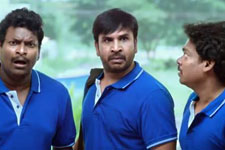 Chaitanya Karthik / fullhyd.com
EDITOR RATING
1.5
Performances
Script
Music/Soundtrack
Visuals
2.0
1.0
2.0
2.0
Suggestions
Can watch again
No
Good for kids
No
Good for dates
No
Wait for OTT
No
Incorporating into movies a few references to things that have unintentionally become memes on social media is fine. But when you try to do that for a runtime of two hours, all it does is give your audiences an opportunity to recalibrate their tolerance levels.

Srinivasa Reddy is known for his comic timing, and you'd expect him to churn out a laugh riot for his directorial debut. Only, his idea of comedy and that of the audiences do not seem to have any overlap. You just wonder if the director thinks that stupidity translates to funny. Because while you feel stupid while watching Bhagya Nagara Veedhullo Gammathu, you don't feel the fun aspect of it. Maybe the movie was made as a joke on the sensibilities of the audience.

Srinu (Srinivasa Reddy) and his friends Peter (Shakalaka Shankar) and Jojo (Satya) aspire to get into movies, but they have a hard time in succeeding. They decide to try their hand at short films, start looking for a beautiful girl to play the role of the heroine. Then comes the heroine (Dolly Shah), who is pretty irrelevant for most of the movie.

Srinu suddenly learns that he has won a lottery of Rs. 2 crore, but that the ticket is sitting in the suit of a junior artiste. In the process of hunting for it, they end up in the crosshairs of a police officer (Vennela Kishore) who is investigating a drug racket. How they get out of it forms the rest of the story.

As long as you are watching Bhagya Nagara Veedhullo Gammathu, there is a nagging thought that the whole premise of the movie is something that would have made at least some sense ten years ago. The current times don't really call upon silliness of this kind to make people laugh. This is very similar to watching Jabardasth comedy skits that are crass at best - it's just that you are watching these skits for about two hours.

There are also episodes that make you feel like you are in the middle of a cringe-fest, like the one featuring Jhansi's "Bathuku Edla Bandi", where you wish someone had just poured hot wax into your ears. Had that cringy, misogynistic and toxic episode been a part of another movie with one of the stars, we would be having an Arjun Reddy controversy again - thankfully, not a lot of people are going to watch this.

Srinivasa Reddy, who is the director of the film, fails to write a decent character for himself. So you can expect how the rest of the characters are written. The performances are pretty poor, too - you can clearly see how desperate every actor is to draw out some laughs from the audiences. There are many comedians in this movie and each one of them got a pop from the audience when they first showed up on screen, but that was about it. A film doesn't work by just giving almost every comedian in the industry some screen time - you don't just look at a comedian and laugh. In this movie's case the only thing that you can laugh at is yourself, for choosing to watch it.

The other aspects of Bhagya Nagara Veedhullo Gammathu don't have much to offer, either. The production values are poor, and the visuals are so annoying that you feel that you are following somebody who is shooting a video for their YouTube channel. The editing is poorly done, too - some scenes drag out for too long and some just end abruptly. The music and everything else is thrown along the wayside.

The movie's genre is comedy, which is John Cena because you can't see it. Indeed, if you made a list of films that reek of chillar comedy, this would definitely make it to the top 10.

Bhagya Nagara Veedhullo Gammathu is strictly for those who spend most of their day watching Jabardasth and dumb TikTok videos and still manage to stay alive.
Share. Save. Connect.
Tweet
BHAGYA NAGARA VEEDHULLO GAMMATHU SNAPSHOT 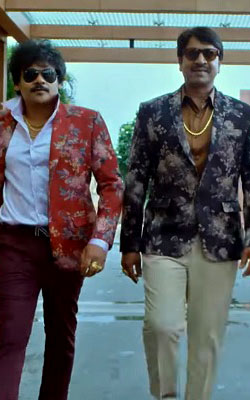 ADVERTISEMENT
This page was tagged for
bhagya nagara veedhullo gammathufull movie
Bhagya Nagara Veedhullo Gammathu telugu movie
Bhagya Nagara Veedhullo Gammathu reviews
release date
Srinivasa Reddy, Vennela Kishore
Follow @fullhyderabad
Follow fullhyd.com on
About Hyderabad
The Hyderabad Community
Improve fullhyd.com
More
Our Other Local Guides
Our other sites
© Copyright 1999-2009 LRR Technologies (Hyderabad), Pvt Ltd. All rights reserved. fullhyd, fullhyderabad, Welcome To The Neighbourhood are trademarks of LRR Technologies (Hyderabad) Pvt Ltd. The textual, graphic, audio and audiovisual material in this site is protected by copyright law. You may not copy, distribute, or use this material except as necessary for your personal, non-commercial use. Any trademarks are the properties of their respective owners. More on Hyderabad, India. Jobs in Hyderabad.