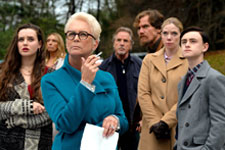 Punarvasu Pendse / fullhyd.com
EDITOR RATING
10
Performances
Script
Music/Soundtrack
Visuals
10.0
9.0
10.0
9.0
Suggestions
Can watch again
Yes
Good for kids
Yes
Good for dates
Yes
Wait to rent it
No
In May 2015, this reviewer attended a lecture by Dennis Altman at the Sydney Writers Festival where the professor spoke in depth about the most-read mystery writer of all time. Though the topic at hand was the ironic appreciation of Agatha Christie and the hidden homo-erotic references in her books, the final take that the people present then understood was that there is immense pleasure in watching how cunningly she leads us to the eventual denouement.

No, the objective of that short paragraph was not to prove how erudite we are. All we wanted to say is that Agatha Christie is the undisputed master of detective fiction, and even an ironic inference of her works cannot help but agree with that fact. And that we are going to make references to Christie and her works, so hang in there. And the fact that Knives Out is director Rian Johnson's quirky love letter to The Dame.

The death of eccentric crime writer Harlan Thrombey (Christopher Plummer) summons his entire family to the millionaire's baroque mansion, just a few days after his birthday. Heated arguments that were heard during Harlan's birthday night make everyone in the family a suspect after the equally eccentric private eye Benoit Blanc (Daniel Craig) is hired to take a look at Thrombey's unfortunate demise. Blanc enlists Harlan's nurse, Marta Cabrera (Ana de Armas), to aid his investigation, and the game is afoot.

Rian Johnson wrote, directed and produced Knives Out, and his attention to detail is fantastic. Knives Out is a fresh, witty and subversive whodunit that initially introduces us to crime fiction stereotypes, and then proceeds to mock them, before it finally turns the whole thing on its head. The script is easily its strongest point, combining comedy and thrill into a smartly packaged murder mystery that keeps the audience guessing until the last few minutes of the film.

Blanc, who apparently is the last of the gentlemen sleuths, hilariously refers to this entire incident as a donut - the whole affair has a hole in the middle. Knives Out gives the audience much more to work with than we'd expect at first glance - we agree that a "donut" is a pretty apt summation of the movie's plot - and then makes said audience guess and second guess their own thoughts as the characters go on about their business, slowly revealing more and more until the donut theory goes into overdrive (which is again explained quite comically by Blanc).

The way it handles humour is what separates Knives Out from other whodunits. The claustrophobic atmosphere of the Thrombey ancestral home (which itself is revealed to be a joke - Harlan purchased it from a Pakistani guy in the '80s) is in no way affected by the frequent use of comedy. There are plenty of jokes, and even more subtle comedic references, but the tension is always apparent, especially when the majority of the cast is together in the mansion.

We'd be remiss if we neglected to mention how perfectly the movie introduces us to its cast. A series of interviews ordered by Lieutenant Elliott (Lakeith Stanfield) reveals the thought process of every individual close to the old patriarch. The characters resemble what you would expect from a Christie novel - scheming, rich, and with individual quirks that make them stand out - but that is where the similarity ends. Knives Out is set in the modern day, and the antiquated English upper class is replaced by characters as varied as an Instagram influencer / lifestyle expert hobnobbing with an alt-right teenager.

Finally, the subtle way in which the film makes fun of entitled and leeching Americans hating immigrants makes for an interesting social undertone that is never preachy. The irony in both SJWs and alt-right trolls arguing about the role of immigrants is not lost upon us, when neither the liberal Joni (Toni Colette) nor the conservative Walt (Michael Shannon) can remember which South American country Marta is from.

Daniel Craig playing a character with a southern drawl is not something we thought we needed in our life. Craig is absolutely brilliant here, expertly navigating the line between over-the-top and parodic. Chris Evans seems to have had a blast playing a character that is the polar opposite of the goody two shoes that his most famous role is known for. Ana de Armas puts in another stellar performance here as Harlan's nurse, and her rising star in Hollywood comes as no surprise to those of us who saw her stand out in a movie that starred both Harrison Ford and Ryan Gosling.

Johnson assembled an exceptional cast to play the Thrombey family, with the likes of Jamie Lee Curtis, Toni Collette, Lakeith Stanfield, Katherine Langford and Christopher Plummer - most getting to enjoy themselves playing roles that we aren't used to seeing them in. There is one single character that seems to only be there for comedic value, but Jaeden Martell's rendition of the same is also riotous.

The music is spot-on, thanks to yet another collaboration between Rian Johnson and his cousin Nathan Johnson. We are treated to orchestral compositions, and we're spoiled with music by the likes of The Rolling Stones and Roxy Music. The titular "Knives Out" by Radiohead is absent, but we were humming it anyway (something Rian Johnson expected of us, by the way!).

Another Rian Johnson staple is cinematographer Steve Yedlin, who elevates the mystery by never overshadowing the narrative or making his camera work distracting or obtrusive. The Thrombey mansion is the focal point of the film, and Yedlin's cinematography does justice to the atmosphere it presents. There are plenty of images captured that you can latch onto for further details, should you want a closer inspection - such as the painting of Harlan which depicts him holding a knife, or the wheel of knives curio that you would only expect to see in an eccentric millionaire's home - but nothing is in your face.

We gleaned next to nothing from the way Knives Out was advertised, so even the marketing game of the film was on point. The care that went into this project in every aspect is apparent, and Rian Johnson did a stand-up job.

Cinematic mysteries are acing their game when the information they present allows us to piece together the puzzle ourselves, while constantly reminding us that something doesn't quite fit in each time we think we have it all figured out. And when the curtain falls, we're left marveling at the sheer ingenuity of it all, at each sleight of hand that bamboozled us, and at each little detail we saw but we didn't observe. Ultimately what we have been trying to say this whole time is, Knives Out is the kind of story that Harlan Thrombey would have himself enjoyed.
Share. Save. Connect.
Tweet
KNIVES OUT SNAPSHOT 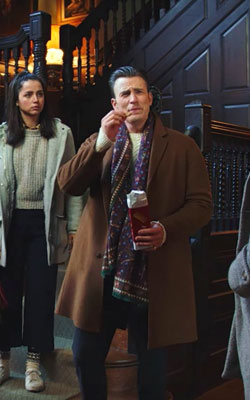 ADVERTISEMENT
This page was tagged for
Knives Out english movie
Knives Out reviews
release date
Daniel Craig, Chris Evans
theatres list
Follow @fullhyderabad
Follow fullhyd.com on
About Hyderabad
The Hyderabad Community
Improve fullhyd.com
More
Our Other Local Guides
Our other sites
© Copyright 1999-2009 LRR Technologies (Hyderabad), Pvt Ltd. All rights reserved. fullhyd, fullhyderabad, Welcome To The Neighbourhood are trademarks of LRR Technologies (Hyderabad) Pvt Ltd. The textual, graphic, audio and audiovisual material in this site is protected by copyright law. You may not copy, distribute, or use this material except as necessary for your personal, non-commercial use. Any trademarks are the properties of their respective owners. More on Hyderabad, India. Jobs in Hyderabad.