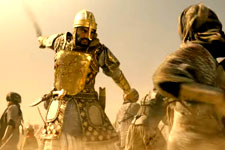 Punarvasu Pendse / fullhyd.com
EDITOR RATING
5.5
Performances
Script
Music/Soundtrack
Visuals
5.0
4.0
3.0
5.0
Suggestions
Can watch again
No
Good for kids
Yes
Good for dates
No
Wait to rent it
Yes
Panipat is the dramatised story of the Third Battle of Panipat, fought between the Maratha armies led by Sadashivrao Bhau (Arjun Kapoor) and the Afghan ruler Ahmad Shah Abdali (Sanjay Dutt). The Peshwas were the de facto rulers of an empire that at its peak reached Attock in modern-day Pakistan, and their seat of power was Pune in Maharashtra. Ahmad Shah was the founder of the Durrani empire in Afghanistan, who had come to India upon the insistence of Najib-ud-Daula, with a hundred thousand men - determined to raid the weakened Mughal capital of Delhi which was under the protection of the Marathas.

The two armies race against each other to gain a stronghold, neither very successful at their attempts to cross the raging Yamuna river. Political alliances, intrigue and grand betrayal are all on the menu, as the two military commanders finally face each other at the historic battleground of Panipat.

Director Ashutosh Gowariker takes a lot of liberties with the script of Panipat, which while not uncommon is definitely a little irksome for anyone with some knowledge of the Peshwa history. This is still forgivable compared to some jarring dialogue writing which makes a complete hotch-potch of Marathi and Hindi, particularly so when said words come out of the mouth of a nobleman.

There is also a weird secular undertone in Panipat, as Hindus and Muslims come together as per political convenience. Sadashivrao took from the Nizam's service an adept artilleryman, Ibrahim Khan Gardi, after defeating the Nizamshahi despite mistrust from his own cousin Raghunathrao. Hindu kings swear allegiance to Ahmad Shah Durrani in order to topple the Marathas, and the Afghan even makes an observation - "Hindostan is not united - the small rulers continue to squabble amongst themselves." Gowariker also almost manages to not paint Muslim rulers as monsters (well, almost - we have a very graphic scene about the emperor's wrath). The Marathas also end up getting glorified despite what happened.

But credit where it's due - Panipat spends a good amount of time showing us the intricate dealings of the two rival commanders as they wheel and deal their way into alliances with the local North India fiefdoms. Money, promises of land, and religion - nothing is spared as the two race to seize control. The first half of the movie draws you in - partially on its own rightful merit, and partially and ironically because it is very similar to the current political climate in the same Indian state that the Peshwas came from. Nothing is permanent in politics, and factions exist until the next better offer comes along, the film says, and we nod in agreement.

Gowariker also pays attention to his expansive battle scenes, and it shows. Despite the overacting and the unnecessary song and dance sequences, the director manages to illustrate the differences in tactics that the opposing armies employ. Each part of the army - the artillery, the cavalry, the infantry - has a part to play, and we get to experience how each element is used by the opposing generals.

Arjun Kapoor is burdened with a very heavy task, and to his credit he takes it up earnestly, but his character still feels one-dimensional, bogged down by the saviour persona. Kriti Sanon is more interesting, both in terms of the way her character has been written and the effort she took to get her accent right. It's nowhere close to being perfect, agreed, but Kapoor's Bandra boy-isms can be jarring to someone who was born and brought up in the hometown of the Peshwas, such as yours truly. Sanjay Dutt honestly sounds the same in everything, and he impassively trudges along.

The CGI employed in Panipat would have blown our minds a decade ago. Alas, things have changed quite a lot since, and some scenes - especially those from an otherwise engaging battle sequence - are extremely off-putting.

There are three songs in the movie, which are three too many. Nothing really stands out, and the music by Ajay-Atul is distinctly average.

Panipat is primarily let down by its idealisation of Peshwas/Maratha Army, even if it thankfully doesn't romanticize social evils such as sati à la Padmaavat. Just like the elevation of its eponymous battleground, Panipat sticks to the ground level.
Share. Save. Connect.
Tweet
PANIPAT SNAPSHOT 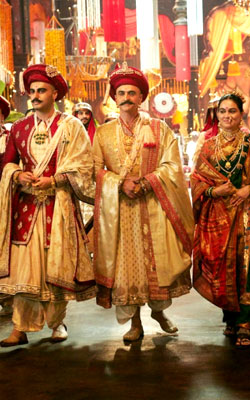 ADVERTISEMENT
This page was tagged for
Panipat hindi movie
Panipat reviews
release date
Arjun Kapoor, Kriti Sanon
theatres list
Follow @fullhyderabad
Follow fullhyd.com on
About Hyderabad
The Hyderabad Community
Improve fullhyd.com
More
Our Other Local Guides
Our other sites
© Copyright 1999-2009 LRR Technologies (Hyderabad), Pvt Ltd. All rights reserved. fullhyd, fullhyderabad, Welcome To The Neighbourhood are trademarks of LRR Technologies (Hyderabad) Pvt Ltd. The textual, graphic, audio and audiovisual material in this site is protected by copyright law. You may not copy, distribute, or use this material except as necessary for your personal, non-commercial use. Any trademarks are the properties of their respective owners. More on Hyderabad, India. Jobs in Hyderabad.