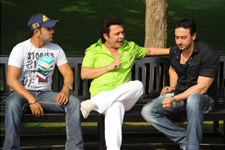 Ravi Kandala / fullhyd.com
EDITOR RATING
3.0
Performances
Script
Music/Soundtrack
Visuals
3.0
1.0
1.0
1.0
Suggestions
Can watch again
No
Good for kids
No
Good for dates
No
Wait for OTT
No
It is not easy to replicate something that creates a big impression on the minds of the viewers. A trendsetting director often falls prey to the trend that he sets, and is seldom able to recreate the magic of his first effort. One of the best examples of this is our very own Hyderabadi Nagesh Kukunoor, who has never quite replicated the easy humour and matter-of-fact storytelling portrayed in his first movie, Hyderabad Blues.

The other example is, of course, the team of The Angrez. The film was a trendsetter, and the characters in it became iconic representatives of the old-world roguish charm of the Old City of Hyderabad. It was liked by not just the targeted Old City audience, but by a wide spectrum of audience across the state. However, the subsequent movies that have attempted to cash-in on the success of Angrez have been shunned by everyone, including the target audience.

With the absence of big-ticket releases this summer, and with the small number of big releases intent on flopping, left, right and centre, yet another film attempting to cash in on the Hyderabadi lingo has made it to the theatres, and we trudged along yet again, hoping that we would get to watch a movie half as decent as The Angrez. Alas, Paisa Potti Problem is not even a pale shadow of The Angrez, and we trudged out of the theatre disappointed.

The film is the story of three friends, Salim (Mast Ali), Feroz (Feroz Khan) and Aamer (Rajaa Sagoo), and their trials and travails. Salim does nothing, Feroz aims to start his own business, and Aamer wants to become an actor. The three also have love stories that they aim to bring to logical conclusions.

The trio falls into problems with strange characters - from blood-thirsty money-lending eunuchs who charge interest of 10% a day, to sleazy filmmakers who make semi-porn flicks, to dons who organize their own wrestling games. These wrestling games form the film's climax, and are shot on the floor of an emptied-out pool in some abandoned guest house on the outskirts of Hyderabad. The pool is covered with carpets that were rented from HS CO (the only prominently visible thing on the screen while these matches go on).

The only redeeming feature of the movie is Mast Ali's comedy as Salim. The man continues from where he left off in the previous movies, and does a fine job as Salim. He also has a couple of genuinely funny lines, and one scene where he demonstrated a new method of drinking alcohol without getting caught (by pouring alcohol into a flask and swigging it from tea-cups!).

Paisa Potti Problem has songs that parade the leads among the heroines or among random girls who seem picked up from local bus-stops. All the goons in the movie seem to have been brought to the set straight from some gym in the Old City and asked to stand, with their hands crossed, on either sides of the screen.

The leads and the supporting cast are all amateurs who seem to be struggling to contain their laughter most of the time. The acting is no great shakes, and the characters are unnecessarily loud (our ringing ears are proof). The director has no clue about the finer aspects, actually, about any aspect, of filmmaking. He ends up prolonging scenes much longer than necessary. A lot of TV-serial-style editing and camera effects are also apparent.

There is also a good deal of vulgarity in Paisa Potti Problem, something that was absent from the first few Hyderabadi flicks. The vulgarity is in bad taste, and is simply there to cater to the front-benchers. The profanity levels in the film also go beyond the usual limits, and the beeped-out gaalis are quite easily distinguishable. The audience in Galaxy Theatre also made sure we knew what the beeps signify, by performing spot-dubbing for the characters.

The entire movie is shot in Ramoji Film City, or a couple of other locations that suspiciously look like Ramoji Film City. Therefore, it seems like a better idea to wait until the heat abates a bit and take a trip to Ramoji Film City, than to see Paisa Potti Problem.
Share. Save. Connect.
Tweet
PAISA POTTI PROBLEM SNAPSHOT 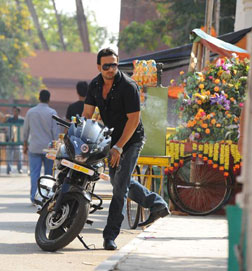 ADVERTISEMENT
This page was tagged for
Paisa Potti Problem
Paisa Potti Problem hindi movie
Paisa Potti Problem reviews
release date
Mast Ali, Feroz Khan
Follow @fullhyderabad
Follow fullhyd.com on
About Hyderabad
The Hyderabad Community
Improve fullhyd.com
More
Our Other Local Guides
Our other sites
© Copyright 1999-2009 LRR Technologies (Hyderabad), Pvt Ltd. All rights reserved. fullhyd, fullhyderabad, Welcome To The Neighbourhood are trademarks of LRR Technologies (Hyderabad) Pvt Ltd. The textual, graphic, audio and audiovisual material in this site is protected by copyright law. You may not copy, distribute, or use this material except as necessary for your personal, non-commercial use. Any trademarks are the properties of their respective owners. More on Hyderabad, India. Jobs in Hyderabad.