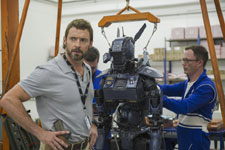 Zehra Abbas / fullhyd.com
EDITOR RATING
6.5
Performances
Script
Music/Soundtrack
Visuals
6.0
5.0
7.0
7.5
Suggestions
Can watch again
No
Good for kids
No
Good for dates
No
Wait to rent it
Yes
Take a cocktail shaker. Throw in a cup of Robocop, add a splash of I, Robot, a generous squeeze of ET and a dash of AI: Artificial Intelligence, and shake it well. Pour that cocktail into a highball, and what you get is a familiar taste with a strange after-taste. And we doubt that you can get drunk on it.

Chappie is set in a dystopian future in Johannesburg where the police force has "recruited" Tetravaal's armour-plated robots to successfully bring down the high crime rate. Deon Wilson (Dev Patel), the inventor of the Scout robots, is the blue-eyed boy of Tetravaal CEO Michelle Bradley (Sigourney Weaver), a fact deeply resented by rival inventor Vincent Moore (Hugh Jackman). Deon's obsession with artificial intelligence results in a eureka moment after years of work, and he secretly steals a Scout robot for testing his programme. In a sudden twist, Deon and the robot are kidnapped by a trio of criminals - Ninja and Yolandi (Ninja and Yolandi Visser), and Yankie (Jose Pablo Cantillo), who force Deon to activate the robot so that they can use him in a heist.

The robot is activated and displays a child's consciousness; he is christened Chappie by Yolandi. The criminals proceed to manipulate Chappie's orientation with the world in order to prepare him for the heist but this is complicated by the teachings of his 'maker', Deon, and what results is one confused robot. However, Chappie is clear about one thing - his human consciousness retains the strong desire to live. What follows is the robot's violent, often funny but mostly emotional interaction with the human world.

Sharlto Copley plays the titular protagonist, and does an admirable job as the robot with artificial intelligence who is capable of emotions as wide ranging as timidity, sheepishness, despair and doubt, but the writing fails to establish a convincing emotional arc. Sadly, the character of Chappie is one of the biggest weaknesses of the film. In an attempt to make it mimic a child's voice and tone, the makers have Chappie sound plain old weird. Ninja helpfully describes him as a "retarded robot" at one point, and politically correct viewers will struggle not to laugh at this description.

The audience doesn't know how to react to Chappie cringing and cowering in the face of Ninja's tough, bootcamp introduction to weapons and the world, in that order. The viewer gets even more puzzled when Chappie lolls about with a "Mommy" doll, or (yes, it gets worse) when he has a touching conversation with Mommy Yolandi about the soul and the after-life while she reads bedtime stories to him as a musical box tune plays softly in the background.

The point is that when you see a robot designed to kick ass, you keep itching for it to kick ass. What you get instead is a goofy, needy version of ET on a sugar rush. ET go home? No, audience go home. Long story short, the makers make an unsuccessful attempt at garnering viewer sympathy and a connection with Chappie, but commit the critical mistake of giving him the kind of "adorable" mannerisms and reactions that are better suited to Wall E.

Rapper duo Ninja and Yolandi of Die Antwoord fame retain their real names for the film, their band merchandise is littered all over the film and their songs blare in the background but it's never clear if they're playing themselves or, more likely, a fictionalized extension of their real life celebrity personas. The duo make a decent acting debut, but fans might find the incongruent maternal angle to Yolandi's character a little strange.

Dev Patel is sincere and does well with the geeky enthusiasm of his character, but somehow all his performances have a certain boyishness to them, which he needs to lose fast. Hugh Jackman plays a boring, one-tone villain with a bad haircut and a bad wardrobe, and you wonder why the Wolverine signed up to play a rat. Sigourney Weaver's presence in a two-bit role is another mystery, and lends some credence to the rumours of an Alien sequel by Blomkamp.

Like all Blomkamp films, Chappie is also set in Johannesburg, and kudos to the production team for creating a realistic, gritty, debris-strewn, dilapidated setting punctuated by bright bubblegum pink and yellow machine guns. The visual effects are stunning, and special mention should be made of the cutting-edge motion capture work done for Copley.

The music by Hans Zimmer and the cool sounds of Die Antwoord (among others) are a definite plus, and complement the fast pace of the film. Chappie's torture scene is moving, and you cannot miss the subtle irony of the "Reject" sticker on his head. The robot's "gangsta" training by Ninja is pretty funny, and the action sequences and effects in the climax are brilliant.

Sadly, the below-par writing overpowers all of these strengths. The writers, Blomkamp and Terri Tatchell, attempt to engage in social commentary via sci-fi. It has been done before, and by Blomkamp himself in the past, but a glut of big ideas is infused into a muddled script at the cost of character development and narrative plausibility. A close look at the narrative underneath the surface reveals issues like loss of innocence, nature versus nurture, ethical dilemmas, evolution, immortality, religion... Phew! Unfortunately, not one of them receives the kind of treatment that can spark meaningful debate.

Blomkamp's critically acclaimed District 9 and the moderately successful Elysium have given him a reputation of sorts - he is considered filmdom's new sci-fi god. The producer/director stays true to his oeuvre in Chappie, his third film, but you get the impression that he is still struggling to find his voice. It's safe to say that Blomkamp fans will be divided on this film.

The end of the movie leaves the audience with mixed feelings. Visually, it's a satisfying end to an action film, but emotionally, it feels forced and rushed. The end also gives the impression that the makers plan a sequel. Please queue to the left to sign a petition requesting Blomkamp to "Let Chappie Go".
Share. Save. Connect.
Tweet
CHAPPIE SNAPSHOT 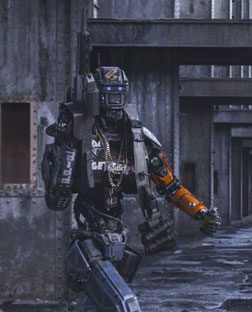 ADVERTISEMENT
This page was tagged for
Chappie english movie
Chappie reviews
release date
Sharlto Copley, Dev Patel
theatres list
Follow @fullhyderabad
Follow fullhyd.com on
About Hyderabad
The Hyderabad Community
Improve fullhyd.com
More
Our Other Local Guides
Our other sites
© Copyright 1999-2009 LRR Technologies (Hyderabad), Pvt Ltd. All rights reserved. fullhyd, fullhyderabad, Welcome To The Neighbourhood are trademarks of LRR Technologies (Hyderabad) Pvt Ltd. The textual, graphic, audio and audiovisual material in this site is protected by copyright law. You may not copy, distribute, or use this material except as necessary for your personal, non-commercial use. Any trademarks are the properties of their respective owners. More on Hyderabad, India. Jobs in Hyderabad.