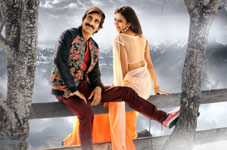 Ravi Kandala / fullhyd.com
EDITOR RATING
3.0
Performances
Script
Music/Soundtrack
Visuals
4.0
2.0
4.0
6.0
Suggestions
Can watch again
No
Good for kids
No
Good for dates
No
Wait for OTT
No
Nandamuri Kalyan Ram is a hardworking man with a passion for movie-making. That is evident from the fact that he keeps producing, and acting in, disaster after disaster mostly. His judgement about the merits and demerits of the script is clearly questionable.

This is what we had also written in our review of Om 3D, one of the most expensive films that the actor produced and acted in. Now, he's producing movies with other heros. Kick 2 is his first such venture, with Ravi Teja as the hero and Kalyan Ram's good friend Surender Reddy as the director. And your opinion of the man does not change one bit after watching the movie. He is still as passionate and still as clueless.

Kick 2 is about Robin Hood (Ravi Teja), who's the son of Kick (Ravi Teja). While Kick was all about getting kicks, Robin is all about comfort. He can go to any lengths for it. One day, a guy from Vilaspur in Bihar watches Robin beat up a goon, and is immediately convinced that he is the only one who can help their village.

The village is plagued by Solomon Singh Thakur (Ravi Kishan), a self-proclaimed evil man who calls himself Son Of God. He drives the people to work in his mines, puts them on drugs, uses them to guard the mines and terrorise the villagers, and even steals their kids.

The villagers then contrive to bring Robin to their village and plan to set up a tiff between Robin and Thakur so that Robin can kill Thakur and they can live happily ever after. This Sholay rehash lasts for around 160 minutes, and several questions are answered through the course of the movie - the most important one being, how to make Kalyan Ram spend way too much money.

Kick 2 is so clichéd, it is a straight throwback to the Manmohan Desai era. A village living in captivity for nearly two generations suddenly decides that one guy is their saviour because he beats up a goon. They then spend tens of thousands to keep the said guy in comfort until and after he comes to their village. Even after he comes to their village, they keep indulging in silly antics through nearly two-thirds of the second half to make the hero confront the villain. The actual hero-villain enmity is only for the last half hour.

The screenplay of Kick 2 moves along at a snail's pace, and there is a constant visible attempt to infuse entertainment into the proceedings. While this approach worked in Kick, here it seems like everyone's trying too hard.

The film also needs you to stretch your credulity to breaking point. For example, When their only "saviour" is leaving the country from Hyderabad, the village folk decide to pray - all of them stand outside the village temple and pray, and Robin actually gets off that plane. In another such instance, when a few guys tell Thakur's son that he's not a "mard" yet, he grabs a girl at a party in his house, puts a table up as a screen, and rapes and kills her even as everyone in the party, including ministers and policemen, watches. These are two of the kinds of scenes that Kick 2 features - if the director expected us to identify with these characters or get the emotion behind these scenes, then we were definitely not the intended audience.

Ravi Teja acts well - when has he not, frankly? - but looks way too thin. His diet program does not seem to have worked all that well. Rakul Preet is pretty, but to believe that she comes from that village is difficult. She looks way too fair and groomed to come from a village where people eat only one square meal a day.

Ravi Kishan overacts away to glory - so much so, that you start rooting for the hero to kill him. Brahmanandam's comedy is barely funny. There are Bollywood actors like Sanjay Mishra and Rajpal Yadav who clearly seem like they had no idea what they were doing in this film.

The movie is shot well, and the sets are appealing. Thaman composes some decent tunes, and then proceeds to kill them by auto-tuning his singers' voices to robotic extents. The action is mostly people bouncing around, and cricket with a sickle for the bat. 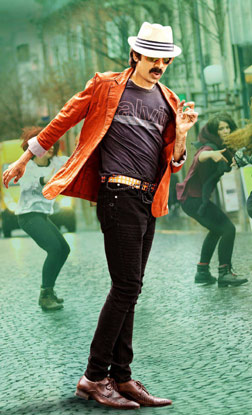 ADVERTISEMENT
This page was tagged for
kick 2 telugu movie movierulz
telugu movies kick2 watch
kick 2 telugu full movie movierulz
kick2telugu full
kick 2 full movie telugu
Follow @fullhyderabad
Follow fullhyd.com on
About Hyderabad
The Hyderabad Community
Improve fullhyd.com
More
Our Other Local Guides
Our other sites
© Copyright 1999-2009 LRR Technologies (Hyderabad), Pvt Ltd. All rights reserved. fullhyd, fullhyderabad, Welcome To The Neighbourhood are trademarks of LRR Technologies (Hyderabad) Pvt Ltd. The textual, graphic, audio and audiovisual material in this site is protected by copyright law. You may not copy, distribute, or use this material except as necessary for your personal, non-commercial use. Any trademarks are the properties of their respective owners. More on Hyderabad, India. Jobs in Hyderabad.