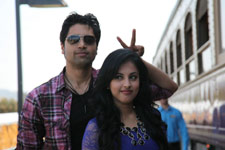 Ravi Kandala / fullhyd.com
EDITOR RATING
4.0
Performances
Script
Music/Soundtrack
Visuals
4.0
3.0
5.0
5.0
Suggestions
Can watch again
No
Good for kids
No
Good for dates
No
Wait to rent it
No
Advice is very easily doled out. It is incredibly easy to tell someone to do something in a particular manner. Not until we find ourselves in their shoes do we realise how difficult it is to actually execute the task. This is where we find people falter - people who display supreme confidence in the things they preach, stumble and stutter when they are stuck. Into this category of people falls actor, writer and director Sesh Adivi.

Sesh's advice lies in the tagline of the film - Keep It Simple Stupid - which he has abbreviated as KISS. This is the very thing he fails to execute. The man fails to keep things simple, and falls flat while trying to juggle amongst writing, acting and directing the film. How we wish he had kept it simple!

The film is about 24 hours in the life of a guy and a girl in the city of San Francisco. Seenu alias Sunny (Sesh) is a happy-go-lucky Indian thief in San Francisco, who can charm people out of their pants (he displays this talent on both men and women). He runs into Priya (Priya Bannerjee), an NRI girl who's about to commit suicide to escape from her control-freak father.

Seenu then persuades her to do all the things that she had always wanted to do, before committing suicide. The two go around San Francisco doing precisely this.

The plot is super-yawn-inducing, we are sure. From Itlu Sravani Subramanyam to the recent Anjaana Anjaani, the "live before you die" plot has been done to death. These kinds of films are largely character-driven, and with nearly 80% of the movie showcasing only the leads, it is imperative that the leads be magnetic and have sizzling chemistry. The screenplay also has to be absolutely riveting, and should steer clear of the repetition that will otherwise set in.

KISS fails on both accounts. The leads are decent - Sesh Adivi is a looker who carries some of the light-hearted stuff easily enough, and Priya Bannerjee does show some spark in a few scenes - but they are far from magnetic.

Sesh turns out to be an utter disappointment once the emotional stuff sets in, while Priya Bannerjee's expressions turn out to be extremely limited. The pair's chemistry looks forced and put on, and the romantic moments fizzle out more often than not. Sesh Adivi should probably stick to one of the three tasks - acting, writing or direction - acting, if you ask us.

The screenplay of the film also falls into the repetitiveness trap, especially in the second half. The leads keep having silly fights, and Seenu's running after the heroine and shouting her name out gets to you. The makers' desire to insert several songs also kills the tempo.

The film's other actors - who play Priya's parents, her uncle and her friends, all of them NRIs - are terrible, and make their scenes look absolutely artificial.

The music is of the fusion variety, the kind that sounds pleasant in the theatre but might hardly be remembered or hummed later. Technical values of the film are quite decent, and San Francisco is explored nicely.

In sum, KISS fails to keep it simple, and ends up looking stupid.
Share. Save. Connect.
Tweet
KISS SNAPSHOT 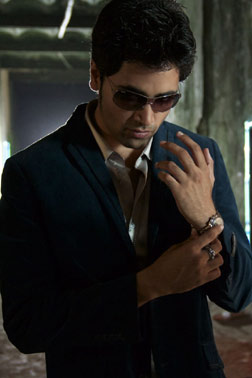 ADVERTISEMENT
This page was tagged for
kiss Adivisesh movie
Kiss telugu movie
Kiss reviews
release date
Adivi Sesh, Priya Banerjee
Follow @fullhyderabad
Follow fullhyd.com on
About Hyderabad
The Hyderabad Community
Improve fullhyd.com
More
Our Other Local Guides
Our other sites
© Copyright 1999-2009 LRR Technologies (Hyderabad), Pvt Ltd. All rights reserved. fullhyd, fullhyderabad, Welcome To The Neighbourhood are trademarks of LRR Technologies (Hyderabad) Pvt Ltd. The textual, graphic, audio and audiovisual material in this site is protected by copyright law. You may not copy, distribute, or use this material except as necessary for your personal, non-commercial use. Any trademarks are the properties of their respective owners. More on Hyderabad, India. Jobs in Hyderabad.