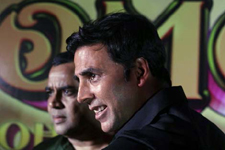 Samrat Sharma / fullhyd.com
EDITOR RATING
7.5
Performances
Script
Music/Soundtrack
Visuals
9.0
8.0
6.0
5.0
Suggestions
Can watch again
Yes
Good for kids
Yes
Good for dates
No
Wait for OTT
No
The sad truth of Indian film marketing and buzz creation is that they are not afraid to over-saturate us with information about their film. I'm fairly certain almost all of you have now been exposed to the fact that this film is based on a Gujarati play, which itself was adapted into a Hindi play. You probably also know the basic premise already - that of a man who sues God, and calls in God men to represent him.

I had no clue. I have been staying away from the telly and radio, and I didn't read anything about this film - not by design, but by chance. I walked into this film expecting your run-of-the mill comedy with Akshay Kumar and Paresh Rawal, and what I got was a thoughtful treatise on the increasing futility of religious constructs to be relevant to today.

The film has a playful tone - but it knows what it's saying. Umesh Shukla and his co writer Bhavesh Mandalia do not believe in the superstition and deification of flawed men that organised religion is trying to sell. This isn't a film that makes fun of God - it makes fun of those mortals who have forgotten God and indulge in surprisingly idiotic things in the name of religion. The film doesn't yet know if it is pro-God, but it is decidedly anti-religion.

When Kanji Bhai (Paresh Rawal in one of those rare treats of Rawal roles where he is the star of the film), an outspoken atheist, loses his business, and is refused insurance coverage as an "Act of God" cannot be insured against, he decides to sue God. He calls in various religious leaders to court, and thus ensues the film's main decision to lampoon various Godmen.

The film mostly constricts itself with polytheistic religions, and so the appearance of a monotheistic God (Akshay Kumar) in the middle of the film is confusing, though never less than entertaining. The film is paced immaculately for the most part, and Rawal is always entertaining given a clear character and motivation, so the first half is a breeze. Most of the second half is made up of Akshay-Paresh banter, and boy is that fun. It's been a long while since we've seen these two men with so much chemistry play off of each other for extended periods, and it pays off in spades.

By the time the preachy and a little boring end trundles through, we've had a good enough time that we don't mind. The end IS atrociously boring though - Shukla seems to think he has earned it with the rest of the film, but if anything, our reliance on the pacing of the film to not notice the poor production values and the television level framing increases manifold by the time.

This is a very challenging film to review, because it will very much mean different things to different people. Those still blinded by religion (any religion) and the distance it puts between spirituality and themselves will surely think the film does not apply to them, that this is just a trite comedy. Atheists will be surprised at the stance the film takes because the very existence of God is not something it is interested in questioning. But if you go in with an open mind, maybe it'll just make you think about your own spirituality, and that is worth the price of admission.
Share. Save. Connect.
Tweet
OMG - OH MY... SNAPSHOT
OMG - OH MY GOD SNAPSHOT 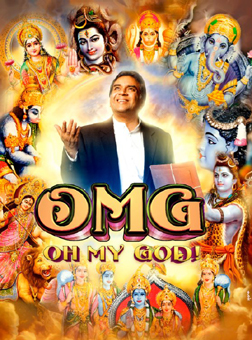 ADVERTISEMENT
This page was tagged for
omg oh my god movie in hindi
OMG - Oh My God hindi movie
OMG - Oh My God reviews
release date
Akshay Kumar, Paresh Rawal
Follow @fullhyderabad
Follow fullhyd.com on
About Hyderabad
The Hyderabad Community
Improve fullhyd.com
More
Our Other Local Guides
Our other sites
© Copyright 1999-2009 LRR Technologies (Hyderabad), Pvt Ltd. All rights reserved. fullhyd, fullhyderabad, Welcome To The Neighbourhood are trademarks of LRR Technologies (Hyderabad) Pvt Ltd. The textual, graphic, audio and audiovisual material in this site is protected by copyright law. You may not copy, distribute, or use this material except as necessary for your personal, non-commercial use. Any trademarks are the properties of their respective owners. More on Hyderabad, India. Jobs in Hyderabad.