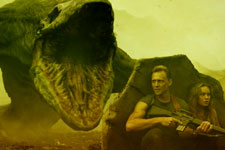 Vaishnavi Kulkarni / fullhyd.com
EDITOR RATING
7.0
Performances
Script
Music/Soundtrack
Visuals
8.0
6.0
7.5
9.0
Suggestions
Can watch again
No
Good for kids
Yes
Good for dates
No
Wait for OTT
No
King Kong was an early '30s movie about a gargantuan ape with a heart that is arguably more human than that of a lot of human beings, that inspired multiple remakes trying to mimic the success of the original. Jumping onto the bandwagon is director Jordan Vogt-Roberts' Kong: Skull Island.

After a mediocre start that lays the groundwork for future events, and that you might as well skip while you get your popcorn and Pepsi, we sail to the mysterious, unmapped Skull Island with a helicopter squadron led by Preston Packard (Samuel L Jackson), a former British Special Air Service Captain named James Conrad (Tom Hiddleston), photographer Mason Weaver (Brie Larson), and a trio of scientists whose academic life has left them woefully unprepared for the horrors that are about to befall them. The group has been hired by the British government to map out the island.

Aboard helicopters, the explorers fly straight through the heart of a hurricane and emerge unscathed - only to be swatted aside like gnats by the enraged ape king they run into. He is not entirely to blame on this count - any reasonable individual would be filled with righteous indignation if a swarm of invaders entered his home and set off explosives the minute they set foot, which the scientists do to determine if the the ground is hollow.

Many members of the expedition are killed in the attack, and the remaining get split into two groups, which begin their journey through the island with a singular goal in mind: to reach its north side in three days, to avoid being stranded there indefinitely.

James and Mason along with their band of misfits, comprising two scientists and a soldier, stumble upon the island's native folk and meet Hank Marlow (John C Reilly), a fighter pilot in World War II who crashed into Skull Island and who wants nothing more than to make it back to civilisation.

Hank tells them of the true danger on this Jurassic Park-esque island (hint: it's not Kong - it's never Kong). The plot fails to truly advance, though - incidents feel scattered and haphazard, and lack a coherent flow. Some of the characters are mind-numbingly idiotic, and even the sensible ones do precious little to stop the reckless tomfoolery until it is too late. Perhaps aware of this, this film attempts to use lush landscapes, breath-taking scenery and horrifyingly huge insects (with spiders the size of trees, this place sure is an arachnophobe's worst nightmare - watch out, Ron Weasley!) to distract you from its flimsy, hollow base.

The story manages to pull itself together long enough to give you the climax, an epic fight between the humans, King Kong and "the Big One". It is larger-than-life and overwhelming, and is a nail-biting finish to the otherwise run-of-the-mill creature film.

The film's major drawback is its lack of emotional depth. There is plenty of blood, gore and action to go around, but what set the 2005 King Kong apart from its contemporaries of the same genre was the compassion and companionship between Ann and Kong. Kong: Skull Island does take a shot at this aspect, but it is a lazy, half-hearted effort. There is a dearth of character development, and the movie feels far too much like a pile of loose ends by the second half.

It is not all bad, though. The film has its share of pros that balance the cons well. The cast do a splendid job, turning their rather poorly-written characters into investable renditions. Although Tom Hiddleston seems more of a sweet gentleman than a hardened, money-hungry mercenary, he is perfect for his role. His calm, self-assured, rational demeanour suits the character of James Conrad, while his occasional displays of tenderness for Mason and bravery make you swoon.

Brie Larson performs well as the young photographer with a spine of steel and a heart of gold. She is fierce and kind, and the connection she establishes with Kong is palpable. John Reilly's portrayal of the slightly senile veteran, cut off from the world and stranded in bygone times, is wonderful - he is both humorous and tragically lost.

Samuel L Jackson is the crowning glory of an exceptional team. He steps into the shoes of his vengeful, villainous character with ease, and the intense hatred burning in his eyes as he glares at the giant ape is frightening to behold.

The visual and sound effects alone are worth the price of entry. The colossal creatures, including Kong, look and sound terrifyingly lifelike, and will likely star in your children's (and perhaps even your own) nightmares. The untamed beauty of the forests, the crystal-clear rivers and the craggy mountains of this fictional island will make for a wanderlust Instagrammer's paradise. And all the roars and shrieks make for plenty of leg-grabbing thrills.

Kong: Skull Island may not be a masterpiece, but it is certainly a fun and entertaining watch for all.
Share. Save. Connect.
Tweet
KONG: SKULL ISLAND SNAPSHOT 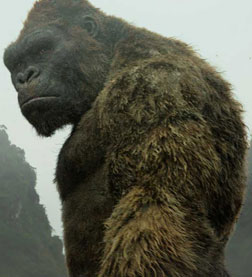 ADVERTISEMENT
This page was tagged for
Kong: Skull Island english movie
Kong: Skull Island reviews
release date
Tom Hiddleston, Samuel L. Jackson
theatres list
Follow @fullhyderabad
Follow fullhyd.com on
About Hyderabad
The Hyderabad Community
Improve fullhyd.com
More
Our Other Local Guides
Our other sites
© Copyright 1999-2009 LRR Technologies (Hyderabad), Pvt Ltd. All rights reserved. fullhyd, fullhyderabad, Welcome To The Neighbourhood are trademarks of LRR Technologies (Hyderabad) Pvt Ltd. The textual, graphic, audio and audiovisual material in this site is protected by copyright law. You may not copy, distribute, or use this material except as necessary for your personal, non-commercial use. Any trademarks are the properties of their respective owners. More on Hyderabad, India. Jobs in Hyderabad.