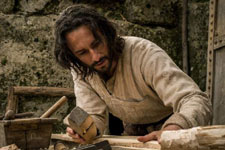 Jaiwantika Dutta-Dhupkar / fullhyd.com
EDITOR RATING
6.0
Performances
Script
Music/Soundtrack
Visuals
7.0
6.0
6.0
8.0
Suggestions
Can watch again
No
Good for kids
Yes
Good for dates
Yes
Wait to rent it
No
Steering clear of comparisons with the 1959 Academy Award winner, let's just begin by saying that the Ben-Hur of 2016 is a reasonably techomplished film, with fine performances to boot. It uses the familiar trope of mythology and family drama to nuzzle close to its viewers' hearts, and gets a lot of things right.

Those who like history and politics with a fair garnishing of religion will find much to like - although the film takes a fairly realistic stance, and never goes OTT. The movie takes a look at Jerusalem in the pre-Christ era, and the colonial politics of the Romans as they conquered the kingdoms of the Jewish elite. It tries to evoke some Holocaust sentiment, with several scenes of barbarism inflicted against the hapless, cultivated Jews - and the ploy works to a fair extent. The film also uses the old Biblical device of two brothers against each other in Caine and Abel fashion, but this aspect forms a very minor aspect of the overall narrative. Essentially, the movie makes powerful statements about individuals losing their identity and what they value most to fulfill the ambition of that nameless god that is the State.

Ben-Hur is also a film about faith - it admits as much - which could even be ironical, because initially neither Judah Ben Hur (Jack Huston) nor Messala (Toby Kebbell) are portrayed as particularly religious people. While Ben Hur is a Good Samaritan and a nobleman attached to his family and heritage, Messala is his adopted brother who finds his fortune in the Roman Army and has faith in its ideals. As brothers the two are rather close, and even Messala's induction into the Roman Army doesn't change things between them. It is not until politics and misunderstanding get in the way of true brotherhood that Messala is prompted to take stringent action against Ben-Hur's family: Ben-Hur's father is killed, his sister (Sofia Black D'Elia) and mother (Ayelet Zurer) are locked up to become lepers, and Ben-Hur himself is made a galley slave. His dismayed wife Esther (Naznin Boniadi), who manages to escape, seeks recourse in the teachings of Jesus, a local carpenter divine in his humanity. Jesus preaches brotherhood and forgiveness amidst the bloodshed.

Meanwhile, Ben-Hur, galley slave for five years, doesn't lose humanity either. Chained to the docks and forced to row, he escapes only when the ship is attacked. Washed ashore at the camp of Sheikh Ilderim (Morgan Freeman), he's kept in the stable with the horses, where the Sheikh helps him recuperate and reclaim his life in exchange for his expertise with the equines. Eventually, it is the Sheikh who strikes a wager with the Romans that allows Ben-Hur to race their star Messala.

The race scene in the 1959 Ben-Hur was an epic in itself, and this one doesn't disappoint, either. It's fairly turbo-charged, and helped in no small part by the VFX and good technology that make the cinematography so fine. Indeed, visually Ben-Hur is an impressive film, even if not right up there. The editing keeps the pace going, and some cuts actually thrill and make the narrative more meaningful. The performances, too, are an asset to the film, with Jack Huston rendering the character of Ben-Hur well, and Toby Kebbell as Messala playing a fine antagonist. There are other fine performances, too, including by Morgan Freeman as Sheikh Ilderim, Naznin Boniadi as Esther and Rodrigo Santoro as Jesus Christ.

The second half of the film shows the rise of the Christ, and Jesus weaves in and out of the narrative till his crucifixion which causes Ben-Hur to have a massive change of heart. In keeping with its true spirit, Ben-Hur actually ends on a happy note of forgiveness and reconciliation, and you'll find that that doesn't make it any less of an epic.

Watch Ben-Hur for its technical wizardry, nice writing and inspiring performances. This one will be time well-spent.
Share. Save. Connect.
Tweet
BEN-HUR SNAPSHOT 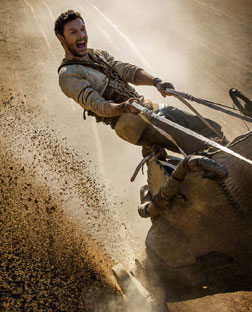 ADVERTISEMENT
This page was tagged for
Ben-Hur english movie
Ben-Hur reviews
release date
Jack Huston, Toby Kebbell
theatres list
Follow @fullhyderabad
Follow fullhyd.com on
About Hyderabad
The Hyderabad Community
Improve fullhyd.com
More
Our Other Local Guides
Our other sites
© Copyright 1999-2009 LRR Technologies (Hyderabad), Pvt Ltd. All rights reserved. fullhyd, fullhyderabad, Welcome To The Neighbourhood are trademarks of LRR Technologies (Hyderabad) Pvt Ltd. The textual, graphic, audio and audiovisual material in this site is protected by copyright law. You may not copy, distribute, or use this material except as necessary for your personal, non-commercial use. Any trademarks are the properties of their respective owners. More on Hyderabad, India. Jobs in Hyderabad.