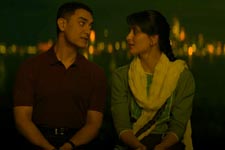 Punarvasu Pendse / fullhyd.com
EDITOR RATING
6.5
Performances
Script
Music/Soundtrack
Visuals
6.0
6.0
7.0
9.0
Suggestions
Can watch again
No
Good for kids
Yes
Good for dates
No
Wait for OTT
No
In 2008, after watching the premiere of Jaane Tu Ya Jaane Na, two friends spoke about the movies they loved - and Forrest Gump was a mutual favourite. One of the two friends, veteran Marathi (and now Hindi) actor Atul Kulkarni, was hit with the realisation that he wanted to adapt the Tom Hanks drama for an Indian audience, and he wrote the first draft of the script in ten days. It took another two years for his friend, a certain Aamir Khan, to read the script, and a further few seconds to agree to not only act, but also produce the film. It took a further 12 years for the official Hindi remake of the multiple Oscar-winning film to release - phew, quite some backstory.

Laal Singh Chaddha is the second film helmed by director Advait Chandan, post a five-year hiatus after the wildly successful Secret Superstar. While the film is an almost shot-for-shot adaptation of the Hollywood classic for the most part, Chandan manages to impart a unique Indian flavour to the movie that even elevates it above the source material in one or two places.

Laal Singh Chaddha (Aamir Khan) is a slow-witted man on a train who starts narrating his life's story to an uninterested co-passenger. His tale, set against the backdrop of events - political, sporting, military - that shaped India, gives us a better understanding of this person with a heart of gold. And in doing so, thanks to the anecdotes he narrates of his mother (Mona Singh), the love of his life Rupa (Kareena Kapoor), and his friends Bala (Naga Chaitanya) and Mohammad Paaji (Manav Vij), slowly piques the interest of even the most reticent of his co-passengers.

The first time I watched Forrest Gump was in 2006, when I was barely a teenager. I remember being unimpressed by the movie. This was exacerbated further when I was around 16, and watched The Shawshank Redemption - getting surprised that Forrest Gump swept up all the accolades, overshadowing the Stephen King adaptation. I saw it again, today, and found layers to the movie that thirteen-year-old me did not understand - and yet the nagging feeling of being underwhelmed remained.

I swear this segue into my childhood has a point - I (contrary to things my friends might say) am not the kind of person who rambles on about their life. The point, as pointed out, being - yours truly went into the cinema with an open mind, not shackled by having put the original Forrest Gump on a pedestal. While it is certainly not easy to refrain from comparing Aamir Khan's performance with Tom Hanks' 1994 portrayal, it will only be done once in this review.

Laal Singh Chaddha substitutes rural Alabama for rural Punjab, and presents to us the world through the eyes of its neuroatypical protagonist. The film is a celebration of the original, flaws and all - but is much more sympathetic with its politics. That is not to say it is a fiery re-telling - far from it. We see events that shaped Indian history such as the 1975 Emergency, the 1983 Cricket World Cup win, the 1984 Operation Blue Star and Indira Gandhi's subsequent assasination followed by anti-Sikh riots, the 1992 demolition of Babri Masjid and the subsequent riots, and the 1999 Kargil War to name a few - and the movie plays its safe even when it criticises mindless conflict.

All that being said, the part where the movie shines is where it depicts human relationships. From the close bond shared by Laal and Rupa when they were kids growing up near Pathankot, to Laal's fondness for his mother who always knows how to explain things to him in the perfect way, to his camaraderie with fellow soldier Balaraju "Bala" Bodi who is obsessed with manufacturing underwear - the personal interactions in the film exude a warmth that makes them very comfortable watching. Even the controversial feeling of brotherhood between Laal and his friend Mohammad Paaji is characterised by a mutual understanding of overcoming hardships borne out of disability.

Of course, there are masala moments, for mainstream Indian cinema-going audience demands those - and a scene where Laal shows his dance moves off to an upcoming actor will probably make you smile. There is silly humour, though it laughs at Laal's condition as often as it laughs with him, and there are tragic moments - though there never quite is tragedy, even in death. There is something endearing in Laal's straightforward belief in letting life surprise him, and the package - despite its simplistic message - works.

Aamir Khan's efforts are evident when you see Laal Singh Chaddha. Unfortunately, despite his earnestness, he overdoes the part to the extent that is becomes indistinguishable from his alien bit in PK, and is surprisingly the weakest link in the cast. Kareena Kapoor's portrayal of an empathetic woman, who stands tall despite her trauma, is believable. Naga Chaitanya plays a character with traits similar to those of Aamir Khan's character, but he does so without hamming it up. Mona Singh is strong and resilient despite having to portray the mother of a man who is her senior in age, and Manav Vij rounds up the cast with an able performance of a reformed terrorist. A special mention to Ahmad Ibn Umar, who is effortlessly charming as a young Laal Singh Chaddha.

Pritam's music flows along with the film, especially the title track Kahani. The very hummable song will be a surefire earworm. It is, however, the fantastic camera work by Setu and the crisp editing by Hemanti Sarkar that truly elevate Laal Singh Chaddha. Faithfully recreating scenes from the original film while keeping intact the strong regional flavour, the cinematography team make the film a visual spectacle worthy of the original.

Ultimately, what you get is a disciplined recreation of a crowd favourite, with elements tweaked to suit the Indian cinema-goer's palate. And despite a surprisingly weak performance from its lead actor. It's not often that one says that a film is decent in spite of Aamir Khan, but that's the case with Laal Singh Chaddha. And we come full circle.

Life, indeed, is a box of chocolate. 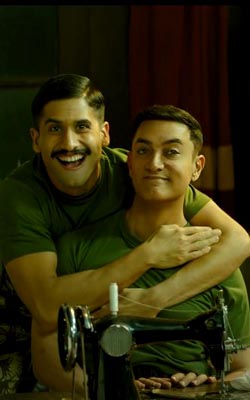 ADVERTISEMENT
This page was tagged for
Laal Singh Chaddha hindi movie
Laal Singh Chaddha reviews
release date
Aamir Khan, Kareena Kapoor
theatres list
Follow @fullhyderabad
Follow fullhyd.com on
About Hyderabad
The Hyderabad Community
Improve fullhyd.com
More
Our Other Local Guides
Our other sites
© Copyright 1999-2009 LRR Technologies (Hyderabad), Pvt Ltd. All rights reserved. fullhyd, fullhyderabad, Welcome To The Neighbourhood are trademarks of LRR Technologies (Hyderabad) Pvt Ltd. The textual, graphic, audio and audiovisual material in this site is protected by copyright law. You may not copy, distribute, or use this material except as necessary for your personal, non-commercial use. Any trademarks are the properties of their respective owners. More on Hyderabad, India. Jobs in Hyderabad.