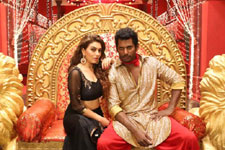 Ravi Kandala / fullhyd.com
EDITOR RATING
4.0
Performances
Script
Music/Soundtrack
Visuals
6.0
2.0
3.0
5.0
Suggestions
Can watch again
No
Good for kids
No
Good for dates
No
Wait for OTT
No
It is good when our heroes have a couple of flops. That is when they try and make different movies. Or at least try. Vishal had had a series of flops when he choose to make a couple of sensible movies. Indrudu had a hero with a strange condition that caused him to fall asleep whenever he was excited. Though the execution was plebian, at least the premise was new. That was a mild hit, and the guy is back to his superstar mass-hero ways with Maga Maharaju.

Maga Maharaju, then, is about Krishna (Vishal), a guy who makes a living by supplying people for political meetings. He sees Maya (Hansika Motwani) one day and falls in love with her instantly. He then meets her a few more times perchance, and she too falls in love with him! A small misunderstanding causes her to go away from him. This is when Krishna's dad Kesava Rao (Prabhu) enters the scene and reveals the three sisters with three daughters clause. However, the three sisters hate Kesava Rao as they believe he was the one responsible for their father's death. How our superhero wins his aunts' hearts and sets everything right forms the remaining plot.

Like we mentioned earlier, this is a done-to-death plot and should never have been made into a film in the first place. The director, Sundar C, does not infuse one bit of novelty into the proceedings, and attempts to win the audience over with some comedy and loads of glamour - courtesy Motwani. The film's screenplay ambles along at a snail's pace until the second half. The second half moves along at a slightly faster clip - that is all we can say about it. Santhanam's comedy in the initial parts of the movie and the climax manages to evoke loud laughter, and saves the film from complete doom.

Acting-wise, Vishal is back to super-hero mode after playing the guy-next-door in his last few outings. He is his usual self. Hansika Motwani, who seems a permanent fixture in Sundar C movies, infuses as much glamour as she can. The supporting cast is good, but the dubbing is terrible. Viewers seeing familiar faces and hearing unfamiliar voices does not bode well for a dubbed movie's fate.

The music is sheer cacophony. Hip Hop Tamizha, as the music director calls himself, scores one hip hop song which is passable. The remaining are just excuses for people to smoke more cigarettes, unless they want to ogle at Hansika Motwani. The production values are good - Vishal does spend well on his own movies, so that is not surprising.

We'd mentioned that we might just watch this one to recover from Ramleela. Unfortunately, Maga Maharaju did little to lift our spirits - we doubt it will do you much good, either!
Share. Save. Connect.
Tweet
MAGA MAHARAJU SNAPSHOT 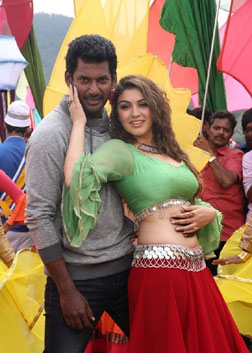 See Maga Maharaju full details
MAGA MAHARAJU USER REVIEWS
1 - 1 OF 1 COMMENTS
POSITIVE  |  NEGATIVE |  NEWEST  |  OLDEST  |  MOST HELPFUL  |  LEAST HELPFUL
USER RATING
8.0
1 USER
Performances
Script
Music/Soundtrack
Visuals
8.0
6.0
7.0
8.0
Can watch again - No
Good for kids - Yes
Good for dates - Yes
Wait for OTT - Yes
The Common Movie Goer on 29th Jun 2015, 1:32am | Permalink
Just saw the movie on Z Telugu. Recorded it and I was able to skip the songs. Was literally ROFLing. Gets really funny at places and plot is typical mass masala. Vishal is perfect hero material as usual - strong, intelligent, scheming, romantic, sentimental...you name it. Prabhu is lovable as always. Ramya Krishna doesn't get to emote much owing to her character. The comedy is clean and I can't say this enough, most of the movie was hilarious. I would definitely recommend it to all mass lovers, way better than all the tripe that has been coming out lately. My rating is a solid 8.

ADVERTISEMENT
This page was tagged for
vishal maga maharaju telugu full movie free download
magamaharaju full movie download mp4
vishal maga maharaju telugu full movie download mp4
maga maharaju visual telugu full movie dowenoled
?? ??????? ?????? ??????
Follow @fullhyderabad
Follow fullhyd.com on
About Hyderabad
The Hyderabad Community
Improve fullhyd.com
More
Our Other Local Guides
Our other sites
© Copyright 1999-2009 LRR Technologies (Hyderabad), Pvt Ltd. All rights reserved. fullhyd, fullhyderabad, Welcome To The Neighbourhood are trademarks of LRR Technologies (Hyderabad) Pvt Ltd. The textual, graphic, audio and audiovisual material in this site is protected by copyright law. You may not copy, distribute, or use this material except as necessary for your personal, non-commercial use. Any trademarks are the properties of their respective owners. More on Hyderabad, India. Jobs in Hyderabad.