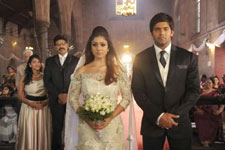 Kritika Deval / fullhyd.com
EDITOR RATING
6.5
Performances
Script
Music/Soundtrack
Visuals
7.0
6.5
7.5
7.0
Suggestions
Can watch again
Yes
Good for kids
No
Good for dates
Yes
Wait to rent it
No
Tamil filmmakers seem to possess the ability to articulate the ephemerality and tenacity of love so much better than most others. First, there was Nuvvu Nenu Prema where a couple forced into marriage overcome past heartbreak to find love growing upon them. Now, we have Raja Rani, where Arya and Nayanatara take us down a similar road, with results surprisingly contemporary and empathetic.

Regina (Nayanathara) and John (Arya), two wounded souls, have reluctantly agreed to spend the rest of their lives with each other. John's dissatisfaction with the status quo translates to an increasing tendency towards drunken rabble-rousing, which causes trouble with neighbours. Regina, who agrees to the match at her father's behest, finds herself constantly rubbing John the wrong way, to which he retaliates wholeheartedly.

Just when we are sure that the rift between the two is much too deep to merit any efforts at mending, fate takes them in hand and forces them to open up to each other. While we spend an unwarranted amount of time beholding the events that brought them to the point of the not-entirely-wanted wedding, John and Regina find themselves getting inexorably closer to each other.

Can they put their past behind on their journey into a contented future? Will they ever confess their feelings? And why exactly do we need to know more about their past romances than the one that forms the basis for the film? These are the questions that will meander in your mind as the film meanders to a rather uninspired ending.

Raja Rani is a revelation for most part, with both Nayanathara and Arya relaying emotions back and forth with great agility. Two people embarking on the journey of life are never as untouched by each other as they are expected to be. With that being the basis of the film, you would expect the development of the lead pair's relationship to take up more than the bits and pieces it has been relegated. However, though it begins on a lighthearted enough note, the film slowly descends into maudlinness, as the tedium of flashbacks takes over.

We are taken exhaustively through Regina's failed romance with Surya (Jai), and John's tragic one with Keerthana (Nazriya Nazim), when we'd rather be seeing more of why Regina and John can finally find peace in each other. We want to see them exploring each others' quirks and making compromises in more than just an emotional sense. The thing about conventional romances is that you're generally left to wonder what next. For a movie that begins with the wedding, however, this one is one helluva missed opportunity. Whatever we see of Regina's and John's interactions are excellently crafted. What fails the film is the perception that the fact of their sad pasts is all that it takes for them to gain sympathy for each other and fall in love.

Nayanathara and Arya give excellent performances, both expressing everything from amusement to anguish without going overboard. Nazriya Nazim is quite lovely and fits her role. Jai is effective in his portrayal of a man in love not strong enough to stand up to his father. The rest of the cast, including Santhanam, Sathyaraj etc., plays an efficient foil to the plot.

The soundtrack is vibrant and fits the equally vibrant and utterly evocative cinematography. The background is mellifluous and is responsible for much of the film's mood.

For all Raja Rani's flaws and foibles, the good intentions shine through in every moment that makes you laugh and every instance that draws a tear. This is a movie for when you need a reminder of what your significant other means to your life.
Share. Save. Connect.
Tweet
RAJA RANI SNAPSHOT 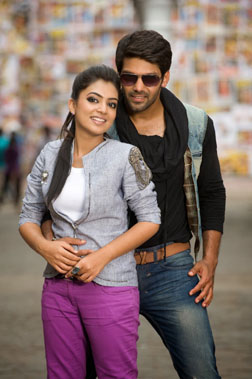 ADVERTISEMENT
This page was tagged for
film review of raja rani telugu movie
Raja Rani telugu movie
Raja Rani reviews
release date
Arya, Jai
Follow @fullhyderabad
Follow fullhyd.com on
About Hyderabad
The Hyderabad Community
Improve fullhyd.com
More
Our Other Local Guides
Our other sites
© Copyright 1999-2009 LRR Technologies (Hyderabad), Pvt Ltd. All rights reserved. fullhyd, fullhyderabad, Welcome To The Neighbourhood are trademarks of LRR Technologies (Hyderabad) Pvt Ltd. The textual, graphic, audio and audiovisual material in this site is protected by copyright law. You may not copy, distribute, or use this material except as necessary for your personal, non-commercial use. Any trademarks are the properties of their respective owners. More on Hyderabad, India. Jobs in Hyderabad.