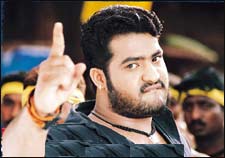 We don't personally have anything against movies as long as they suck or do whatever it is that they do, among themselves. But when they choose to disrupt our privacy (although for purely professional reasons), we roll up our sleeves, tilt our neck both ways, crack our knuckles, and make faces like a man with giant crabs in his pants.

In movies, the above activities mean our hero's ready to spill some guts. It real life, it means the same. But here, the contents of one's guts look really messy just after a heavy lunch. Not to mention the disgusting looks one gets from the people all around.

Luckily, Andhrawala isn't bad enough to make you spill out your lunch, but it won't help in digestion, either.

NTR Jr. (Munna, emulating Chiru in Mutha Mesthri) is a painful resistance to whoever is trying to occupy the modest colony, bang in the center of a commercial forest. The colony is all the family he knows, and he protects it with all his heart, all his courage and all his moves.

Rakshita, as Miss India, matches him move to move and pound to pound. In fact, she has a few more pounds than he does. She initially hates him with every pound in her body, but later, tries to rape him. Yes, rape. If that sounded obscene, imagine it happening. But the film spares that. It shows it happening.

After dishing out the vulgarity, Munna is generally fooling around, when a bunch of important-looking gentleman (Nazar, Banerji etc.) come searching for him. When they find him, they behave as if they've seen a naked ghost of Marlin Monroe. They're so happy and ecstatic, you're almost expecting them to French-kiss him passionately.

The film passes that (may be it was the censor board) and runs forwards into the past. Munna is the only son of Shankar dada (NTR Jr. again), the Andhrawala at a construction site in Mumbai. When a Mumbai bhai (Shivaji Shindey) tries extortion against the builder, Shankar dada gets in the way. The small scrap flames into a full-fledged battle.

Shankar dada, with a bunch of other Andhrawalas in Mumbai, hunts down the network of the don. The don retaliates, but Shankar dada is already a legend. The gangsters are shamelessly running for their lives when he's after them. But more than his wig, his gun is killing them. But as fate would have it, Shankar dada is stabbed from behind, and his followers run away with his only child.

Munna is livid after the narration. How dare they give a wig that ridiculous to his dad? It almost looks like he has a bird sanctuary on his head. Anyway, Munna wants to end what his dad intended to end but prematurely ended before ending. In the end, Munna goes back to Bombay and avenges his dad's death.

NTR Jr. has done a good job and has his moments with the masses. Masses, of course, mean Rakshita. And as said earlier, she's in there only for the masses. Or may be she's in there because Puri Jagannath thought to spice up the drag. While he was at it, he must've accidentally spilled some into his eyes. The film looks like the workmanship of a man without any clear vision.

It's unimaginable to see Andhrawala taking the box office by storm. We'll tell you why, the Andhrawala style:

ADVERTISEMENT
This page was tagged for
Andhrawala telugu movie
Andhrawala reviews
release date
NTR, Rakshita
theatres list
Follow @fullhyderabad
Follow fullhyd.com on
About Hyderabad
The Hyderabad Community
Improve fullhyd.com
More
Our Other Local Guides
Our other sites
© Copyright 1999-2009 LRR Technologies (Hyderabad), Pvt Ltd. All rights reserved. fullhyd, fullhyderabad, Welcome To The Neighbourhood are trademarks of LRR Technologies (Hyderabad) Pvt Ltd. The textual, graphic, audio and audiovisual material in this site is protected by copyright law. You may not copy, distribute, or use this material except as necessary for your personal, non-commercial use. Any trademarks are the properties of their respective owners. More on Hyderabad, India. Jobs in Hyderabad.