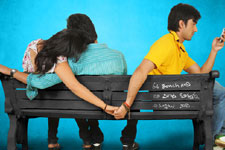 Kritika Deval / fullhyd.com
EDITOR RATING
6.0
Performances
Script
Music/Soundtrack
Visuals
6.0
6.0
7.5
7.0
Suggestions
Can watch again
No
Good for kids
No
Good for dates
Yes
Wait for OTT
Yes
3G Love, supposedly short for "third generation love", was supposed to have been a Valentine's Day release. It has all the right ingredients for one, too - plenty of PYTs, lots of couply confusion, snappy dialogue, peppy music...

And, for the most part, it is all really fun. Sure, the foundation of this latest "youth" entertainer is the done-to-death premise - that all boys want from a relationship is sex, that all girls want is money and gifts and someone to pick them up and drop them.

However, it's the spiffy new packaging around the chockfull of clichés that catches your attention in 3G Love. 3G Love's debutant filmmaker makes use of resources that were hitherto not in much use in Tollywood - a judicial use of screenplay, coupled with near-perfect pacing, and excellent direction.

And, on and on go the stories of the guys who are not "fresh", the girl with a boyfriend whose dad gets her a marriage proposal, the other girl who has three strings with a guy on the end of each... the same old spiel that you've seen in plenty of other films lately.

All of this, though, is done with such enthusiasm and good humour that you rarely find yourself getting bored. Also, 3G Love is surprisingly non-judgmental, right up until the last 45 minutes, which is when all the fun on the screen comes to a ridiculous head in a college drama-like confrontation between girls and boys.

As we walk out of the movie hall, we realise that 3G Love could've gone horribly wrong. It is a quite hefty tale of a total of 8 relationships (sort of - there's are two girls who string along more than one guy). There's heartbreak, betrayal, attempted suicides and everything else that comes along with being young and painfully in love. There is also a lot of adult humour that stops short of crassness.

What saves the film, though, is its unwillingness to take itself seriously. And so we have surprisingly clever popular culture references, some utterly zany moments (there's something about a suicide point in a village that is called "vellakura, chastav"), and the wonderfully peppy music that is reminiscent of Mahesh Shankar's in Vennela.

Not to mention the acting by the well-publicised newcomers.

All in all, 3G Love will entertain you if you're in the mood for it. You will laugh at all the right places, and maybe even shed a tear. If it does get a tad exasperating in places, just remember that you'll walk out of the movie hall pretty well satisfied with what you got for 150 bucks and a couple of hours of time.
Share. Save. Connect.
Tweet
3G LOVE SNAPSHOT 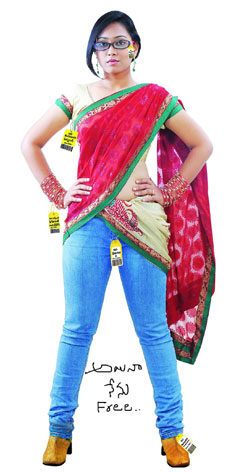 ADVERTISEMENT
This page was tagged for
3G Love telugu movie
3G Love reviews
release date
Nikhil Siddharth, Neelima Neelu
theatres list
Follow @fullhyderabad
Follow fullhyd.com on
About Hyderabad
The Hyderabad Community
Improve fullhyd.com
More
Our Other Local Guides
Our other sites
© Copyright 1999-2009 LRR Technologies (Hyderabad), Pvt Ltd. All rights reserved. fullhyd, fullhyderabad, Welcome To The Neighbourhood are trademarks of LRR Technologies (Hyderabad) Pvt Ltd. The textual, graphic, audio and audiovisual material in this site is protected by copyright law. You may not copy, distribute, or use this material except as necessary for your personal, non-commercial use. Any trademarks are the properties of their respective owners. More on Hyderabad, India. Jobs in Hyderabad.