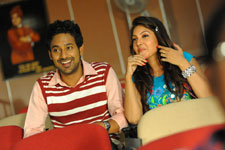 Kritika Deval / fullhyd.com
EDITOR RATING
4.5
Performances
Script
Music/Soundtrack
Visuals
4.0
5.0
5.5
5.0
Suggestions
Can watch again
No
Good for kids
Yes
Good for dates
Yes
Wait to rent it
Yes
No matter what its shortcomings, Tollywood must be admired for persistence. When it takes something up, it does so with a vengeance. For as long as it takes for its audience to get bored of that something.

Telugu cinema's current obsession happens to be love, and all of its permutations and combinations, with a heavy sprinkling of "human nature" thrown in. And, after Priyathama Neevachata Kusalama (PNK), the obsession seems to be reaching its tether.

Priyathama Neevachata Kusalama, Nenichata Kusalame... (Beloved, are you alright there? I'm fine here.) Thus go the lines in a song of love, to which this movie owes its title. In PNK, the movie, though, it seems that nobody is alright. Kundana (Komal Jha), is an independent fire-brand - the kind who'll show up to her pelli choopulu high on bhaang - stuck with an increasingly possessive lover in Varun (Varun Sandesh).

As Mem Vayasuku Vachcham, Trinadharao Nakkina's first outing as a director, clearly showed, the man at the helm is one armed with cognoscence in the matters of the heart. What he could also have used, though, is a bit more discretion with his cast.

Varun Sandesh really hit the role-jackpot with Varun, the character. He gets to go from ardent lover to cautious businessman. He gets to be wooed by a pretty girl, and he gets to elope with another. He gets to be a border-line stalker, and a distrustful lover. He gets to go from unimaginable alts to all-time lows. And, being Varun Sandesh, he manages to screw it all up in the only way he knows how - by ensuring that his face doesn't move much (we wouldn't want them wrinkles now, would we?), and by ensuring that people strain to understand whatever it is that he is speaking in the muddy haze his voice is.

And then, there is Priyanka Jha, who messes up her role by whooshing off into the other direction, where lies over-dramatisation. The job description is of a "bubbly" girl, not of one "high on bubbly".

The only actor who does justice to her character is Haasika. She looks lovely, and hits just the right notes with her portrayal of a reticent, yet susceptible, girl in two minds.

Also, one needs to keep in mind that matters of the heart are much more effective on paper, as soul-searching, angst, and all other trappings of a romance can much better be articulated in prose. When the same is translated onto the screen, the events in the lives of the protagonists must be exciting enough to move the plot along.
PNK's story of love lost and love found is not a bad one, but neither is it exciting enough, or propped with good enough dialogue, or clever enough screenplay, to warrant a full length movie - thus leaving you besieged by restlessness at regular intervals.

The camerawork is just a little bit shoddy, and the editor could most certainly have been freer with his scissors. The music is pleasant enough as an accompaniment to the film, but fails to stay with you a few hours after you've seen the movie.

If what you're looking for in a film is to be swept away by the sweetness of love and the depth of human emotion, the ineptly directed and acted-in Priyatama Nee Vachata Kusalama will not satisfy. You'll probably be better off re-directing your yen towards something fun.
Share. Save. Connect.
Tweet
PRIYATAMA NEE VACHATA KUSALAMA SNAPSHOT 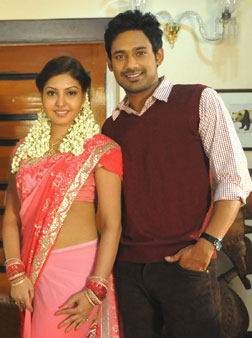 ADVERTISEMENT
This page was tagged for
Priyatama Nee Vachata Kusalama telugu movie
Priyatama Nee Vachata Kusalama reviews
release date
Varun Sandesh, Komal Jha
theatres list
Follow @fullhyderabad
Follow fullhyd.com on
About Hyderabad
The Hyderabad Community
Improve fullhyd.com
More
Our Other Local Guides
Our other sites
© Copyright 1999-2009 LRR Technologies (Hyderabad), Pvt Ltd. All rights reserved. fullhyd, fullhyderabad, Welcome To The Neighbourhood are trademarks of LRR Technologies (Hyderabad) Pvt Ltd. The textual, graphic, audio and audiovisual material in this site is protected by copyright law. You may not copy, distribute, or use this material except as necessary for your personal, non-commercial use. Any trademarks are the properties of their respective owners. More on Hyderabad, India. Jobs in Hyderabad.