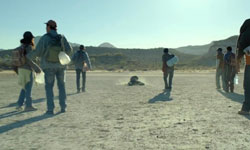 Swaroop Thotada / fullhyd.com
EDITOR RATING
6.5
Performances
Script
Music/Soundtrack
Visuals
7.0
5.0
7.0
8.0
Suggestions
Can watch again
No
Good for kids
No
Good for dates
No
Wait for OTT
No
The villain of Desierto (Jeffrey Dean Morgan) is a constantly boozing, gun-slinging and unmistakably psychotic redneck, who takes upon himself to "guard" his beloved US borders from illegal immigrants, by killing them in the most merciless fashion. He drives around the borders in a pickup truck with his German shepherd and a rifle which he puts to good use throughout the film. Jonas Cuaron, the writer and director of this film, names him "Sam", and the message couldn't be more blatant.

In fact, the names of the characters are deliberately unsubtle and prophetic of their fate and actions. The protagonist who leads the rest of the characters through the desert is named Moises (Gael Garcia Bernal), and the dog that hunts them down is named Tracker. This naming convention makes the minimalist story sound parable-like, and looks like an attempt to make up for the almost zero insights it throws about its characters.

Desierto starts with a truck-load of illegal immigrants stranded on the unsparingly hot desert after a vehicle breakdown. The only option is to tread through the dangerous badlands, rife with unpredictability. As they chart through, they catch the eye of this misguided patriot and fall prey to his impressive sniper skills. This scene where Sam takes down almost two-thirds of the unfortunate group is brutally elaborate. The meticulous portrayal of the unnerving violence is amply punctuated by the unforgivingly accurate sound effects of bullets thrusting through vital body parts and gory visuals of blood sprayed all around.

All that bloodshed doesn't quench his thirst, though, and now he has to finish off every last one of them. Moises and the rest of the survivors need all the luck in the world to escape from this unrelenting predator and his canine partner, but the plain and arid desert doesn't help their case.

Damian Garcia's wide-angled shots impress via the contrast between the intimidating vastness of the desert and the fragility of the characters seeking its refuge. The tracking shots are mostly handheld but the visuals abruptly oscillate between shaky close-ups and grand wide shots, implying nature's cold indifference to their plight. But this subtext is unsuitably cleverer than the film's unabashed pursuit of genre thrills, perhaps because Garcia is more talented a cinematographer than Cuaron is as a director.

This is evident from how the film's social commentary about the xenophobia of current times is not helped by its one-dimensional characters and the film's over-eagerness for B-movie episodes. Alfonso Cuaron infused his survival epic Gravity with subtext and symbolism, though his plot was wafer-thin. His son chooses a survival drama again but he doesn't display any deft handling of the thematic density of his subject.

I am reminded of Hopkins' brilliant if not great film The Edge, which is basically a bear movie, but is centered around flesh and blood characters that ultimately own the plot. Desierto's time-sensitive social message doesn't gel with the monolithic primal level it operates on.

Gael Garcia Bernal and Morgan emerge much taller than the film, and are every bit believable. The dialogue is dried out but that is understandable - how would these parched, tired and terrified characters come up with nuanced lines?

This film was released internationally a year ago, but is more relevant at the moment, as Trump actually has won the election. Had it embraced the complexity of its subject, it would have been even more impactful.
Share. Save. Connect.
Tweet
DESIERTO SNAPSHOT 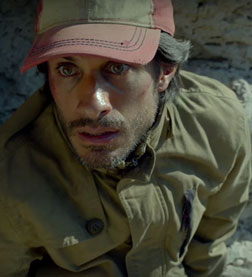 ADVERTISEMENT
This page was tagged for
Desierto english movie
Desierto reviews
release date
Garl Garcia Bernal, Jeffrey Dean Morgan
theatres list
Follow @fullhyderabad
Follow fullhyd.com on
About Hyderabad
The Hyderabad Community
Improve fullhyd.com
More
Our Other Local Guides
Our other sites
© Copyright 1999-2009 LRR Technologies (Hyderabad), Pvt Ltd. All rights reserved. fullhyd, fullhyderabad, Welcome To The Neighbourhood are trademarks of LRR Technologies (Hyderabad) Pvt Ltd. The textual, graphic, audio and audiovisual material in this site is protected by copyright law. You may not copy, distribute, or use this material except as necessary for your personal, non-commercial use. Any trademarks are the properties of their respective owners. More on Hyderabad, India. Jobs in Hyderabad.