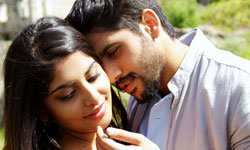 Ravi Kandala / fullhyd.com
EDITOR RATING
6.0
Performances
Script
Music/Soundtrack
Visuals
6.0
6.0
7.0
7.0
Suggestions
Can watch again
No
Good for kids
No
Good for dates
Yes
Wait to rent it
No
Those who've seen Gautham Menon movies know that they are filled with conversations. Long, slow conversations that sometimes lead to something, and at other times, are just that - conversations. Whether he's making a love story (Ye Mayaa Chesaave) or an actioner (Gharshana), he will have a beautiful romance filled with conversations interwoven into the story. Sahasam Swasaga Saagipo is no different.

The first half of the film - well, most of it anyway - is a sweet love story that first brews at the hero's house, then on a road trip. Chinna (Naga Chaitanya) has just completed his MBA and is busy whiling away his time when Leela (Manjima Mohan) enters his life. She's his sister's friend and is staying with her for a few days.

It is love at first sight for Chinna, though he thankfully doesn't tell the girl anything. He just keeps speaking to her, and in one such conversation tells her about a road trip that he plans to take to Kanyakumari with his first love, his Royal Enfield, and another friend. When the time comes for the road trip, he finds her ready to leave with him, "to feel the wind in my face like you described".

The trip done, the duo head back home when they get into an accident. What happens next defies all logic and is completely irrational, but if you are willing to go along, it is a terrific ride. The climax is a bit of a dampener with all the unnecessary gun fights, but the pre-climax had people hooting their lungs out - we thought it was silly, but clearly, the audience was more than satisfied.

The first half has Gautham Menon pull a completely audacious move - the timing of the Vellipomaake song in the movie is laughably absurd, and if the emotion hadn't been carried off, it would have been the director's single biggest mistake. However, the emotion does carry through, and the move pays off handsomely. The director is in fine form in the first half in the romance, and deploys twists in the second half to implausible levels. Subtle comedy has people laugh out loud several times, while the songs have them screaming for more. This man needs to make more movies, and much better ones.

Naga Chaitanya is an improvement over his previous movie - that is usually not saying much, but trust us, he's definitely better in this movie. He does well in the romance scenes and is decent in the action scenes. Manjima Mohan is neither dazzlingly white or stick thin, and is quite a delight. The supporting cast do their bit - Baba Sehgal as the villainous police officer actually tries to be menacing instead of playing it funny or over the top.

A R Rahman is in fine fettle, and Menon places the songs beautifully. The second half is largely songless, but the background score is relentless and heightens the entire tension. Technically, too, the film is top notch. The cinematographer does as much justice to the beauty of the road trip as he does to the dark claustrophobic frames in the second half.

Saahasam Swasaga Saagipo is a roller coaster ride that goes on for a bit too long. The first part is fun but then you start wishing that the twists and turns would stop. Step in if you're prepared for a Gautham Menon romance and a Varma style actioner combined.
Share. Save. Connect.
Tweet
SAAHASAM SWAASAGA SAAGIPO SNAPSHOT 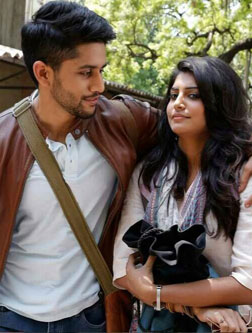 ADVERTISEMENT
This page was tagged for
Saahasam Swaasaga Saagipo telugu movie
Saahasam Swaasaga Saagipo reviews
release date
Naga Chaitanya, Manjima Mohan
theatres list
Follow @fullhyderabad
Follow fullhyd.com on
About Hyderabad
The Hyderabad Community
Improve fullhyd.com
More
Our Other Local Guides
Our other sites
© Copyright 1999-2009 LRR Technologies (Hyderabad), Pvt Ltd. All rights reserved. fullhyd, fullhyderabad, Welcome To The Neighbourhood are trademarks of LRR Technologies (Hyderabad) Pvt Ltd. The textual, graphic, audio and audiovisual material in this site is protected by copyright law. You may not copy, distribute, or use this material except as necessary for your personal, non-commercial use. Any trademarks are the properties of their respective owners. More on Hyderabad, India. Jobs in Hyderabad.