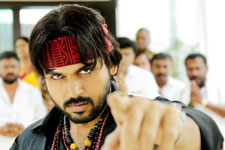 Ravi Kandala / fullhyd.com
EDITOR RATING
4.0
Performances
Script
Music/Soundtrack
Visuals
6.0
4.0
2.0
7.0
Suggestions
Can watch again
No
Good for kids
No
Good for dates
No
Wait for OTT
No
Director Gokul is one lucky man. In one film, he gets to shoot a Madmaxesque song sequence, Bahubali / 300 style war sequences and stunning ghost sequences with amazing graphics. And producer Param V Potluri appears one credulous man with loads of money and very little understanding of cinema. What else would explain the fact that he produced a movie like Varna with a budget of over Rs. 40 crores? Or a complete non-starter like Brahmotsavam with a budget of God-knows-how-many crores? Or Kaashmora now with a budget of over Rs. 60 crores?

Kaashmora starts off well enough. Kaashmora (Karthi) in the titular role pulls off a credible enough heist as the witch doctor who can drive ghosts away. After a super-serious sequence, the film suddenly veers off into comic territory showing Kaashmora and his entire family as a group of frauds that cheat gullible people and earn loads of money. However, once the premise is established, the entire first half meanders along establishing the same premise again and again. Karthi keeps this half going with his comic timing and some decent visual effects.

The beginning of the interval episode brings out some big laughs, but then it runs for too long and the effect is ruined. At the interval point, you are intrigued, but think that the promised flashback episode with its war sequences will make the second half slightly better. The building Karthi is stuck in at this point is nearly reminiscent of the Angkor Wat temple.

The flashback comes and goes, and the stunning visuals from the trailer are all wasted in an introduction sequence for the character Karthi plays in the flashback, Raj Nayak. Raj Nayak is the commander-in-chief of the armed forces of a kingdom - he's a ruthless man with a flair for battle and a liking for women. He wins battles and takes the women from the defeated kingdoms as his prize. He also has eyes for the princess of his kingdom - Ratna Mahadevi (Nayantara). The remaining part of the film contrives to connect these two halves and characters.

The biggest problem with Kaashmora is its director not knowing when to say Cut. Most scenes that begin decently and seem entertaining go on for too long killing the effect. Added to that, scenes in the first half get quite repetitive. The flashback has top-notch graphics and a great battle sequence in the beginning, but the sequence comes without any preamble. The same war sequence in Bahubali was so effective because you know what was at stake and how bad the villains were. Here, when you see Karthi rout an army single-handedly and the commander of the opposing army falling for just one blow, it hardly seems worth the effort. Even later, when things get really serious, Gokul fails to maintain the tempo or tone and the movie keeps vacillating between an exorcism drama and a comedy.

Karthi shoulders the entire film and is wonderful in both his roles. Especially as Raj Nayak, he brings out the madness in the character quite well - how we wish that role was written better! Sri Divya plays a barely-there part while Nayantara gets a character that does not require her to flex her acting chops too much. The rest of the cast provides able support.

Technically, the film is top-notch. It boasts of some amazing visual effects, and the entire flashback sequence is shot in an imaginative manner with some great sets as well. The producers clearly spent heaps of money and it shows. The music is forgettable and so is the picturisation of the songs. And the editor should have really used his scissors better - the film could really do with a good trim. 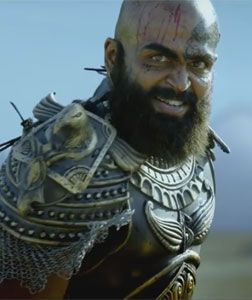 ADVERTISEMENT
This page was tagged for
Kaashmora telugu movie
Kaashmora reviews
release date
Karthi, Nayantara
theatres list
Follow @fullhyderabad
Follow fullhyd.com on
About Hyderabad
The Hyderabad Community
Improve fullhyd.com
More
Our Other Local Guides
Our other sites
© Copyright 1999-2009 LRR Technologies (Hyderabad), Pvt Ltd. All rights reserved. fullhyd, fullhyderabad, Welcome To The Neighbourhood are trademarks of LRR Technologies (Hyderabad) Pvt Ltd. The textual, graphic, audio and audiovisual material in this site is protected by copyright law. You may not copy, distribute, or use this material except as necessary for your personal, non-commercial use. Any trademarks are the properties of their respective owners. More on Hyderabad, India. Jobs in Hyderabad.