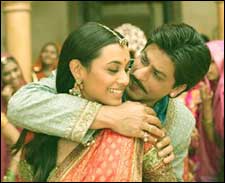 Himabindu Chitta / fullhyd.com
EDITOR RATING
6.0
Performances
Script
Music/Soundtrack
Visuals
NA
NA
NA
NA
Suggestions
Can watch again
NA
Good for kids
NA
Good for dates
NA
Wait to rent it
NA
Boring? An SRK film? Before I get lynched for that, let me assure you that if you fall into the category of fans who root for SRK no matter what, then you will enjoy Paheli. The same goes for fans of Rani Mukherjee. But if you're just expecting your money's worth of good entertainment, then you, like me, will very likely end up being disappointed.

Paheli's plot is inspired by "Duvidha", a work of fiction by Vijaydan Detha. The premise, although uncommon, is simple – a newly-married Lachchi (Rani), eager to discover true love in her husband Kishen (SRK), and is utterly dismayed to learn that he is leaving to build a business in Jamnagar and will return only after five years.

Meanwhile, a ghost (also SRK) in love with the innocent Lachchi learns of her husband’s departure, and comes to her household in his guise. He reveals to Lachchi that he is, in fact, an imposter, and asks her to choose between him and her husband. Charmed by his honesty, and flattered at being given the right to make her own decision – a privilege she has never enjoyed – she decides to welcome him into her lonely life.

Fast-forwarding through a few unnecessary songs and a very predictable camel race, we find Lachchi pregnant. News of this reaches even distant Jamnagar, where the real Kishen has been laboring away at his ginti (record books) for four years. Shocked to hear that his wife has one baking in the oven while he has been engendering wealth and not children, he takes the first camel back to his village, only to be castigated as an imposter.

The village elders, unable to settle the question of identity, decide to seek the wisdom of the king. On their way to the royal palace, the caravan meets a goatherd (Amitabh Bachchan) who offers to distinguish between the imposters convincingly. Asked to prove his love for Lachchi, the ghost reveals his true identity to all. We won't spoil it for you by disclosing the climax, but we can let on that it is a happy ending.

Peripherals such as acting and aesthetic appeal are the strengths of the movie. The casting is excellent, with no actor seeming uncomfortable in his/her role. SRK and Rani are lively and not overly histrionic.

The sweeping cinematography by Ravi K Chandran gives a larger-than-life quality to the landscapes, color and vibrancy of Rajasthan. This genius has been behind the camera in Black, Dil Chahta Hai and Virasat among many others, so this stunning new offering comes as no surprise.

Ultimately, however, cinema is merely a medium through which a story is told, and if the story is not enticing enough, the audience feels cheated. In Paheli, the peripherals overshadow the plot, which lacks depth and intricacy. In its 2½ hour narrative, the movie remains an utterly simplistic interpretation of the original folktale.

With superb actors in the supporting roles, it is a terrible shame that most of the characters are etched only superficially. Only Juhi Chawla, with her tranquil features and warm, expressive eyes, brings a wealth of emotion into her character of Gajrobai. Many sub-plots, like Gajrobai being deserted by her husband Sunderlal (Sunil Shetty, in a role shorter than one of Mallika Sherawat’s skirts), remain woefully under-exploited.

One leaves the theater feeling that there could have been so many layers added to each incident depicted, so much more meaning infused into even this simple narrative. Somehow, Paheli never graduates from being visually appealing to truly touching the heart. And that is exceedingly unfortunate, because this plot had the potential to be a winner.
Share. Save. Connect.
Tweet
PAHELI SNAPSHOT

See Paheli full details
PAHELI USER REVIEWS
1 - 3 OF 3 COMMENTS
POSITIVE  |  NEGATIVE |  NEWEST  |  OLDEST  |  MOST HELPFUL  |  LEAST HELPFUL
USER RATING
6.4
52 USERS
Performances
Script
Music/Soundtrack
Visuals
NA
NA
NA
NA
Can watch again - NA
Good for kids - NA
Good for dates - NA
Wait to rent it - NA
ABHI SHIKTHA on 30th Jun 2005, 4:32pm | Permalink
OHH....V DINT EXPECT A SRK MOVIE LIKE THIS...
RATING
2
Vulcan on 29th Jun 2005, 10:10pm | Permalink
Man, I was so pleased to see another user cribbing abt. the rating. But as soon as I saw his second sentence, I stopped feeling pleased. Or at least my english teacher taught me that whipping your head into the monitor is not termed among protocols for being pleased. Paheli at best could have been a play, executed by eager school children trying to impress their teachers. The plot is obviously tailor-made for a play. Plays usually don't make for good cinema scripts (none of the shakespearean ones did). Cinema certainly requires a different level of script-writing. It's embarrassing to see greats like Amol Palekar, SRK and Keeravani (who rehashed a telugu tune) being part of a movie, which begs to be classy while sinking in stupidity.
RATING
2
Rahul on 24th Jun 2005, 9:07pm | Permalink
Two stars? I hate to write this "is the reviewer insane??!!" comment, but in all fairness, sometimes its easier to accept a movie as the multitude rather than try be intelligent in a review. Because sometimes, the right thing to call a good movie is to call it a "good" movie. I did see this one and thought it was a remarkable effort.

ADVERTISEMENT
This page was tagged for
paheli movie
Paheli hindi movie
Paheli reviews
release date
Shah Rukh Khan, Rani Mukherjee
Follow @fullhyderabad
Follow fullhyd.com on
About Hyderabad
The Hyderabad Community
Improve fullhyd.com
More
Our Other Local Guides
Our other sites
© Copyright 1999-2009 LRR Technologies (Hyderabad), Pvt Ltd. All rights reserved. fullhyd, fullhyderabad, Welcome To The Neighbourhood are trademarks of LRR Technologies (Hyderabad) Pvt Ltd. The textual, graphic, audio and audiovisual material in this site is protected by copyright law. You may not copy, distribute, or use this material except as necessary for your personal, non-commercial use. Any trademarks are the properties of their respective owners. More on Hyderabad, India. Jobs in Hyderabad.