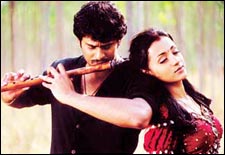 EDITOR RATING
5.0
Performances
Script
Music/Soundtrack
Visuals
NA
NA
NA
NA
Suggestions
Can watch again
NA
Good for kids
NA
Good for dates
NA
Wait for OTT
NA
Pournami is like 2 movies shown one after the other. And it feels like 6 movies shown one after the other. Prabhudeva’s hit debut directorial venture Nuvvostanante Nevoddantana was a copy of Maine Pyaar Kiya. He decides to be original with Pournami, and it backfires. Which is why we at fullhyd.com believe that a person should do what works best for him – if you are good at making remakes of Maine Pyaar Kiya, you should stick to that.

Pournami is a period film – it has elements of ancient Indian tradition, classical dance, mythology and boredom in it. The last one dominates the entire second half. The movie even ends without closing some threads, which proves that even the cast and crew were desperate to somehow finish it off and make a fresh start to life. Fortunately, you, dear reader, do not have to go through all that – you just need to read this review before needing to make a fresh start to life.

Pournami is set in a village, which has a several-century-old tradition that a girl of a certain family, now headed by Chandramohan, has to dance at the temple of Lord Shiva at every pushkara (once every 12 years). It is now the turn of Pournami (Trisha), who her dad (Chandramohan) trains for 10 years for the ritual, but who elopes 10 months before the event. Yes, tough on the father, especially in these days of globalization and liberalization. If you are wondering what that has to do with anything, you need to make a fresh start to life.

The father is reluctant to train his second daughter Chandrakala (Charmme) for the ritual, since there is an evil local zamindar (Rahul Dev) who wants the girl who is to perform the temple dance, to dance for him first and sleep with him for 3 nights. He is praying and waiting for a saviour, who comes in the form of Sivakesava (Prabhas).

A newcomer to the village, Sivakesava charms the village folk with his happy-go-lucky ways. And after saving Chandrakala once from the clutches of the zamindar, he convinces her father that he will safeguard them from the zamindar if he (Chandrakala’s father) teaches her to dance and makes her perform at the ritual.

Chandrakala starts to learn, and soon she falls in love with Sivakesava. But he cannot reciprocate, and has to tell her the truth about who he is. And the second half is all about how long flashbacks can be.

The first half of Pournami is all about the artiste in Prabhudeva overruling the filmmaker in him – the movie starts like an Eastman color Joy Mukherjee film, concentrates on choreography even in the fights of the first half, and ambles about at the pace of a Carnatic music concert. And the second half makes the first half look like a racy thriller. And the film ends in a tearing hurry once the director realizes what time it is – even Lord Shiva would have taken longer to beat up all the goons. And the zamindar is not dealt with at all.

Prabhas is more brawn than performance, especially in the heavy duty dialogues and the soft emotional ones where he has problems. He fit Chatrapati well since he is best as the angry young man. This one doesn’t call for much more range actually, but the chinks are still visible. Trisha and Charmme are both good, and the classical dances look like they trained well. All performances are good, with a special mention due for Chandramohan.

The music by Devi Sriprasad is as clichéd as most of his recent work, though some tunes in the second half have the potential to grow on you if you work hard enough. The art direction and the village and temple sets are good. But on the whole, this isn’t something that is worth the 3 hours it demands.
Share. Save. Connect.
Tweet
POURNAMI SNAPSHOT

Verdict: Identity Crisis between a mass flick and a class flick

Culture should go on, the movie says. If this is the culture that has sustained us for centuries then there should be reservation for

ADVERTISEMENT
This page was tagged for
Telugu8883
Pournami Telugu picture
Pournami cinema
Pournami Telugu
pournami movie review
Follow @fullhyderabad
Follow fullhyd.com on
About Hyderabad
The Hyderabad Community
Improve fullhyd.com
More
Our Other Local Guides
Our other sites
© Copyright 1999-2009 LRR Technologies (Hyderabad), Pvt Ltd. All rights reserved. fullhyd, fullhyderabad, Welcome To The Neighbourhood are trademarks of LRR Technologies (Hyderabad) Pvt Ltd. The textual, graphic, audio and audiovisual material in this site is protected by copyright law. You may not copy, distribute, or use this material except as necessary for your personal, non-commercial use. Any trademarks are the properties of their respective owners. More on Hyderabad, India. Jobs in Hyderabad.