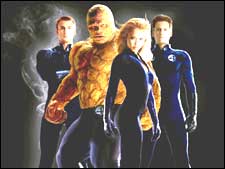 Ghazala Rizvi / fullhyd.com
EDITOR RATING
6.0
Performances
Script
Music/Soundtrack
Visuals
NA
NA
NA
NA
Suggestions
Can watch again
NA
Good for kids
NA
Good for dates
NA
Wait to rent it
NA
For years, movie producers have gone to the bottom of the barrel looking for old tricks to recycle. Most of the times they net in crap, but at times they do get lucky. The almost five-decade-old The Fantastic Four coming alive in a new avatar is an example.

Legend has it that comic book heroes have evolved over the years - sometimes changing their weapons and sometimes their enemies. And observing the declining trends in the reading habits, time and again, these heroes have often made a crossover, from the print to the silver screen.

The Fantastic Four too join in the league of the subtly re-invented on screen Spiderman and Batman. Richards Reeds (Ioan Gruffud) is a scientist too avant garde even for NASA tastes. Stretching the limits of science, he teams up with Dr. Victor Doom (Julian McMahon) to venture into an as yet unattested voyage into the cosmos. He is helped by his buddy Ben Grim (Michael Chiklis), ex-flame Susan Storm (Jessica Alba), and Sue's Casanova brother Johnny (Chris Evans).

Once the stage is set for all the players who you know are going to metamorphose into F4 any time, your expectations are bound to go full steam ahead. Not that you'll be disappointed. Soon, the five-some are entrapped in a blast of cosmic cloud, which bores into them particles from the unknown. The next that you know is that all of them are safely back in their respective rooms, albeit in a hospital.

Little known to them, their genes are following their own altered path, and each develops a unique symptom. Richard accidentally finds out that he his musculature is more flexible than rubber, while Susan turns suddenly invisible. Johnny discovers that the fiery adventurous streak that he has always nurtured is manifesting itself more potently - he is a walking flame. While the three are able to turn on and off their symptoms at their discretion, what happens to Ben Grim becomes a permanent thing.

Now, not everyone reacts to becoming an overnight freak with the same set of emotions. Without delving into the details of Freudian analysis, it is nice to notice that this set of superheroes is truly humane. While Johnny is exhilarated calling himself The Human Torch to the gaping media, and simply The Torch for the women, Ben is mammothly hurt by his wife's hate of his newfound dimensions, as The Thing.

Richard is the stretchable Mr. Fantastic, but prefers using his analytical instincts to his elongated limbs. Susan, already tired of being overlooked by Richard, is not very welcome to the idea of becoming completely invisible.

While the four are dealing with their physical and emotional changes, and trying to adjust to their redefined relationships, the media is already proclaiming them as heroes. Victor, who shared their ghastly experience (and is himself slowly transforming into organic-metallic Dr. Doom), doesn't share their humility, however. He has bigger plans, known only to him, and proclaims the four as his enemies.

While living with the newfound identities is difficult - Ben discovers that his fingers are too big for holding anything made for human use - the four are constantly locked in spats with each other. The highlight of the flick is the bickering between The Torch and The Thing, and the carefully thought out contrast between the stoic sadness of the latter with the flashy, jovial streak of the former. This plot lays adequate ground for building up playful banter, which, while not making you go overboard with laughter, will certainly make you smirk with satisfaction.

Unlike the fashionable and convenient trend among other men in their genre, The Fantastic Four do not hide their identities behind masks, or patrol in the dark. Tim Story has skillfully kept the clichés out of his flick, while adding dollops of humor to it. The action too is more innovative than bizarre, with F4's complementing skills getting the better of Dr. Doom.

Chiklis as Ben, a. k. a. The Thing, is the heaviest as far as onscreen presence is concerned, while Chris Evans is knowingly cool. Jessica, inspite of being made invisible more times than she would have preferred, looks good. Ioan Gruffud, as the leader of the group, is rather inhibited, perhaps to depict his analytical thought process.

F4 will not go on to win accolades for its visual content or its tech, and neither for its story or for its performances. There are loopholes almost everywhere, even by comic-book-licence standards, but you'll not be bothered by them. Watch to enjoy while the fun lasts.
Share. Save. Connect.
Tweet
FANTASTIC FOUR SNAPSHOT

ADVERTISEMENT
This page was tagged for
Fantastic Four english movie
Fantastic Four reviews
release date
Ioan Grufford, Julian McMohan
theatres list
Follow @fullhyderabad
Follow fullhyd.com on
About Hyderabad
The Hyderabad Community
Improve fullhyd.com
More
Our Other Local Guides
Our other sites
© Copyright 1999-2009 LRR Technologies (Hyderabad), Pvt Ltd. All rights reserved. fullhyd, fullhyderabad, Welcome To The Neighbourhood are trademarks of LRR Technologies (Hyderabad) Pvt Ltd. The textual, graphic, audio and audiovisual material in this site is protected by copyright law. You may not copy, distribute, or use this material except as necessary for your personal, non-commercial use. Any trademarks are the properties of their respective owners. More on Hyderabad, India. Jobs in Hyderabad.