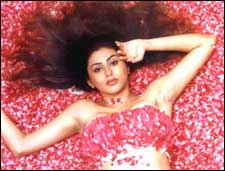 The above analysis shows that Aithe Enti is better by at least 60%*
*500 times of screening other movies vs. a single screening of Aithe Enti.

As is clearly evident from the stats, this is one good bad movie. And aren't all the people wetting their lips and other body parts in anticipation of the story? So here goes.

Radhika is an overweight lady who's trying grow thin. It basically involves a lot of stressful physical activity - dancing, thrusting body parts in all directions rhythmically, lip-syncing to some terrible noises and wearing minimal clothing. Since she's doing all this anyway, she thinks she'll do this in front of the hero (Mohit).

The hero is thoroughly disgusted at her behaviour. If she's undergoing some therapy, ask her to do it in her place, why shove it in his face (figuratively speaking, of course)?! He can take anything, but purple lipstick? Surely, no doctor would've asked her to do that. Why can't she wear orange and yellow lipstick like the others in the movie?

So our hero is disgusted. Mind you, that has nothing to do with him seeing himself in the mirror every morning. Instead, he sees a dream everyday. There's a semi-naked girl (Namitha) who's lying on a bed of rose petals and calling him seductively. She might actually be pleading him to get her out of there because roses bring out rashes on her body. But our hero sees only one message in it - singing a song with Radhika.

After a few dozen songs where Radhika is still trying to lose weight and the hero is still disgusted (which he shows by pressing his mouth against her body organs), there is twist in the story. The hero shifts to Bombay for work.

There, he has to live as a paying guest. And who does he live with? His semi-naked dream girl (Namitha) and her hubby (Steven Kapoor). Seeing her married breaks our hero's heart and whatever residual acting skills he had.

Namitha starts getting close to the hero, and she even lets him watch when she's under the shower. But she only loves her husband. No matter how many people see her taking a shower with her clothes on.

This infuriates the hero. First the flabby girl, now this one - both behaving so strangely. Women! He has to do something drastic now. So he hires a hitman to kill Namitha's husband. But instead of killing the husband, the hitman tries killing the hero himself. Because, the person who plays the hitman is a decent actor, and he cannot bear the frustration of working in this stench-mill.

Okay, it's because the hero accidentally sends the killer his photograph instead of the husband's. But he's rescued by Radhika. He realises how wrong he was for lusting after a married woman.

As if this story weren't enough, there are phenomenally vulgar side-plots that the makers might want to call comedy. And we might want to call the homicide department. Big names like Ali, Bramhanandam and Sudhakar take part in them, which is really a shame.

Only 20 scenes repeat more than once in the movie. Even by mistake there is no coherence between one scene and another. And whatever the body show was, it was utterly un-digesting. So was the movie.

Namitha had said in a pre-release statement that this was a movie that would appeal to her generation. Geez, we didn't know 'Tall and Stupid' was a generation.
Share. Save. Connect.
Tweet
AITHE ENTI SNAPSHOT

ADVERTISEMENT
This page was tagged for
Aithe Enti telugu movie
Aithe Enti reviews
release date
Namitha, Mohit
theatres list
Follow @fullhyderabad
Follow fullhyd.com on
About Hyderabad
The Hyderabad Community
Improve fullhyd.com
More
Our Other Local Guides
Our other sites
© Copyright 1999-2009 LRR Technologies (Hyderabad), Pvt Ltd. All rights reserved. fullhyd, fullhyderabad, Welcome To The Neighbourhood are trademarks of LRR Technologies (Hyderabad) Pvt Ltd. The textual, graphic, audio and audiovisual material in this site is protected by copyright law. You may not copy, distribute, or use this material except as necessary for your personal, non-commercial use. Any trademarks are the properties of their respective owners. More on Hyderabad, India. Jobs in Hyderabad.