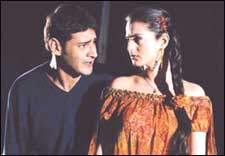 Some might argue that those were neither experimental nor comic, but others have seen those to know better. Naani stands on the brink of becoming one of those, and what eventually keeps it on the brink is a vague craziness that oozes unflappably in here.

This craziness starts at the very beginning. They show a dazed Raghuvaran introducing us to his invention - a two-tailed robotic dog. Crazy? That's insane! Nowhere else has Raghuvaran hammed this much!

He's not the only one who's going crazy with overacting. Naani's mom (Devyani) is also behaving like she's been possessed by an old witch on PMS. And Naani (Ashok - child artist) is at the receiving end of her temper. He's only a kid. How is he supposed to handle such blatant hamming? So he decides to die.

But as luck would have it he's saved by Raghuvaran. With the help of science, Raghuvaran does something impossible. Actually, not science, plain imitation - but 'science' sounds mature. Any connection to the classic by Tom Hanks is plainly coincidental, if you can find some idiot to believe that. So Naani is overnight transformed into a 28-year-old man.

Thus starts the vulnerable love story between Naani and Priya (Amisha). Every time these guys breakout into a song, we realize how vulnerable our stomachs are. Initially, Naani is hesitant about the strong passes that Priya is making at him. But later somehow he forgets all that. Don't blame him. Even Rahman would forget everything if he heard those songs.

Somewhere in this cocky humor, Naani happens to realize his mother's true love for him. Moreover he can match her ham for ham in acting now. So he goes back to the mad scientist who converts him back to the 8-year-old he deserves to be. But chaos strikes - even the 8-year-old starts hamming now! Well, actually, the 8-year-old becomes the 28-year-old after 6pm everyday.

Naani starts living a dual life. During the day, he's the proper 8-year-old going to school etc., and during the night he has to ride the horse. Now, this riding horse business starts soon after he gets married to Amisha. Did we tell you that he gets married to her? We just did.

Anyway, Amisha always behaves like a kid. And as any girl's fantasy is of ending up with a mature responsible man, she has one, too. So she marries Naani. Even Naani is only but a man. Er, boy. Whatever. The way certain parts of Amisha's body have grown, even an 80-year-old corpse would want to marry her. We were talking about her hair and nails there. Promise.

Since Naani does a lot of horse riding, he ends up becoming a dad. Yup. He has a son, and that's when he actually realizes what mother love is all about. Kota Sreenivas Rao, in a brilliant cameo, explains to Naani what motherhood is all about.

So there. That's Naani for you. Of course there are some completely avoidable characters like Bramhanandam, Nasr and Ravi Babu, but yup. It ends this way - 8 by day, 28 by night.

There aren't many positives in this juvenile affair except a couple of forced laughs due to the situations Naani gets into. And a beautiful song on mother sentiment. Also, the use of various shades of lighting has been brilliant in the movie.

But Naani shows that the director wanted all these otherwise good actors to behave weirdly for a purpose that obviously does not show up. Or to be precise, show up for any good.

Mahesh remains the only sane actor in the flick - in parts, that is. Everything else is despairingly fake. The comedy might actually interest many kids. But it isn't completely suitable for family audiences, what some really crass bedroom humor.

Overall, Naani has the half-baked feel of a shabby music video. The tale is definitely told, but it lacks a lot of character.
Share. Save. Connect.
Tweet
NAANI SNAPSHOT

See Naani full details
NAANI USER REVIEWS
1 - 5 OF 5 COMMENTS
POSITIVE  |  NEGATIVE |  NEWEST  |  OLDEST  |  MOST HELPFUL  |  LEAST HELPFUL
USER RATING
7.3
3 USERS
Performances
Script
Music/Soundtrack
Visuals
NA
NA
NA
NA
Can watch again - NA
Good for kids - NA
Good for dates - NA
Wait to rent it - NA
Ashu on 8th Jan 2018, 12:16am | Permalink
This is the best movie full of comedy & the movie which breifly explain about mother's importance 🙏 And what should i say about Mahesh! He is love & he has perfectly done the character of "Naani" . No other actor can do that characted with such ease . Dedicated actor mahesh is😍🙏❤
DRAGON on 13th Dec 2013, 5:21pm | Permalink
It is the remake of Hollywood movie Big (1988)...
modiashiya17 on 8th Jan 2018, 12:18am | Permalink
Mahesh never do remakes
Anonymous on 3rd Oct 2013, 10:49am | Permalink
This is the worst film i hav ever seen. The tamil version is also no better. But the songs of the telugu version are much better than the tamil. My favorites are vasta nee venuka, vayase iravai, and pedave palikina
Srinivas Koduru on 24th May 2004, 2:49pm | Permalink
It is the worst film i have ever seen .....

I madea resolution , not to see any film of Mahesh Babu...character less ppl who made this film ...they are de-moralizing the society in general and kids in specific.

ADVERTISEMENT
This page was tagged for
maheshbabu's nani movie telugu rivew rating
nani 2004 telugu movie downlond#ip=1
naani movie review
nani 2004 telugu movie watch online
Naani Mahesh Babu Telugu full HD movie watch only
Follow @fullhyderabad
Follow fullhyd.com on
About Hyderabad
The Hyderabad Community
Improve fullhyd.com
More
Our Other Local Guides
Our other sites
© Copyright 1999-2009 LRR Technologies (Hyderabad), Pvt Ltd. All rights reserved. fullhyd, fullhyderabad, Welcome To The Neighbourhood are trademarks of LRR Technologies (Hyderabad) Pvt Ltd. The textual, graphic, audio and audiovisual material in this site is protected by copyright law. You may not copy, distribute, or use this material except as necessary for your personal, non-commercial use. Any trademarks are the properties of their respective owners. More on Hyderabad, India. Jobs in Hyderabad.