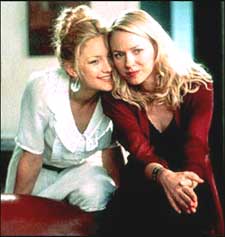 Know what is absolutely divine about French? It doesn't matter what is being said, it always, but always, sounds like sweet nothings being whispered into your ear. Set almost entirely in Paris, there is one thing this movie absolutely accomplishes - it throws that 'always' right out of the window. Five minutes into the movie, and you ask the person sitting next to you if it is a French movie laced with English or vice versa. Sure enough, he thinks you are crazy. How the heck is he supposed to know?

So, that becomes one of those inexplicable mysteries of life. At any rate, by now you know for certain that you don't speak any French, and reconcile to the bitter truth - that you won't understand half the movie. What you do gather, however, is that Isabel (Kate Hudson) is in Paris to support and comfort her pregnant sister, Roxeanne (Naomi Watts), whose French husband wants a divorce because, we presume, he likes squealing, constantly chattering women who are married to homicidal, obsessive men (he is, in fact, having an affair with such a woman).

That, ladies and gentlemen, I'm afraid, is the entire plot of the movie. And, suddenly, the fact that you understand just half the flick becomes a source of boundless joy! Yippeee! Only half of your mind is numb!

There are certain elements of the movie that must be mentioned, because we aren't allowed to put up such a short review. There is Glenn Close (as author Olivia Pace) who has an air of quiet, mature dignity about her. After Fatal Attraction that makes you go "Whoa?", and after seeing her semi-cute assistant whose hair confirms that he gets his hand stuck in an electric socket every now and then. Either that, or he's borrowed a lot of that special Ben Stiller gel from There's Something About Mary. Or maybe old habits die hard, and Glenn is up to some of that "Fatal Attraction" stuff on the sly, and the boy is perpetually in mortal terror of her.

Also, inconsequential to the plot is Isabel's affair with Roxy's 55-year-old in-law who, let's say, has really been around. And somewhere post-interval, you are titillated, tantalised, teased… there is a glimpse of what the French are so famous for - exotically decorated food (what were you thinking?). As for the steamy scenes, they don't sizzle, they just fizzle.

The movie promises to be a modern-day comedy. Well, if this is, in fact, modern day anything, you want to go live in the Dark Ages. But if, thirty years later, I am offered Glenn's role with the assurance that I will look as good, I will take it up, for even lesser than what I got for writing this review!
Share. Save. Connect.
Tweet
LE DIVORCE SNAPSHOT

ADVERTISEMENT
This page was tagged for
Le Divorce english movie
Le Divorce reviews
release date
Kate Hudson, Naomi Watts
theatres list
Follow @fullhyderabad
Follow fullhyd.com on
About Hyderabad
The Hyderabad Community
Improve fullhyd.com
More
Our Other Local Guides
Our other sites
© Copyright 1999-2009 LRR Technologies (Hyderabad), Pvt Ltd. All rights reserved. fullhyd, fullhyderabad, Welcome To The Neighbourhood are trademarks of LRR Technologies (Hyderabad) Pvt Ltd. The textual, graphic, audio and audiovisual material in this site is protected by copyright law. You may not copy, distribute, or use this material except as necessary for your personal, non-commercial use. Any trademarks are the properties of their respective owners. More on Hyderabad, India. Jobs in Hyderabad.