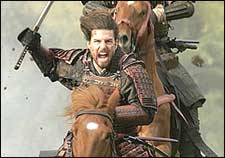 Despite his somewhat distracting hunk-status, Tom Cruise's always been a good actor. In an open-faced, boy-scout kind of way. Like he was in Jerry Mcguire, when his successful career ended the day his conscience awoke. That's how Cruise got stuck in our heads - the guy with a whole army of personal demons and only one truth to hold onto to keep him sane. That's also Captain Algren. Only, with some serious kickass potential.

The story is set in late 19th century Japan, a country eagerly courting development and the Western way of life. Kimonos are replaced with trousers, swords with firearms and warriors with politicians. And the land's oldest defenders, the Samurai, are fast becoming an extinct species. But they refuse to go quietly into the night.

To quell their uprising and train the army in the art of gunfare, Captain Algren, an American war-hero, is brought to Japan on His Emperor's command. Cocky and sure, but plagued by nightmares of the battlefield, Algren is in an eternal conflict with the Powers That Be, even before he reaches Japan. But it's good money, and that usually wins most arguments.

In their first encounter with the Samurai, Algren is captured, but spared his life only because he won't quit fighting. It's almost like he doesn't know how to. This wins him the slightly amused fascination of the chief of the tribe, Katsumoto (played wonderfully by Ben Wantanabe). So Algren, Yankee accent an' all, goes to live in the almost surreal world of the Samurai village.

Surreal because the air at the village of one of history's fiercest warriors is that of idyllic peace. The movie captures beautifully, the quest for perfection that fuels every moment of their lives. And despite the Samurai's distrust and dislike of the Captain (they think the Cruise Man repulsively ugly), their ways and philosophy of life make more sense to Algren than anything ever has. For the first time in his life, he sleeps peacefully at night.

The director has extracted some great performances by the entire cast, so no character overshadows anyone else, and there is no good-guy/bad-guy. You're with the Samurai all the way, but you don't grudge the misguided Emperor either - he's just a child.

In the village, Algren lives at the home of a warrior he killed. He is looked after and tended to health by the man's widow, Taka (a luminous Koyuki). Yes, love does blossom. But that's where this movie is different from others - the most erotically charged scene between the two is one where she is dressing Algren for his last battle as Samurai. Any director who can create steam with both his actors fully dressed has a good thing going.

And that's what this movie does - it takes all those movie clichés (war, love, honour, dying for a cause) and makes them work. And how. The fights are fluid, with an economy of movement that makes them very credible. None of that show-offy classroom crap. And humor surfaces at the most unlikely moments. A good line, as it turns out, works even better in subtitles.

Through a series of political manipulations, the Emperor has his arm twisted to withdraw support to the tribe and order their vanquishment. Algren follows his destiny and trains to become a Samurai to assist them in their final war.

ADVERTISEMENT
This page was tagged for
The Last Samurai english movie
The Last Samurai reviews
release date
Tom Cruise, Ken Watanabe
theatres list
Follow @fullhyderabad
Follow fullhyd.com on
About Hyderabad
The Hyderabad Community
Improve fullhyd.com
More
Our Other Local Guides
Our other sites
© Copyright 1999-2009 LRR Technologies (Hyderabad), Pvt Ltd. All rights reserved. fullhyd, fullhyderabad, Welcome To The Neighbourhood are trademarks of LRR Technologies (Hyderabad) Pvt Ltd. The textual, graphic, audio and audiovisual material in this site is protected by copyright law. You may not copy, distribute, or use this material except as necessary for your personal, non-commercial use. Any trademarks are the properties of their respective owners. More on Hyderabad, India. Jobs in Hyderabad.