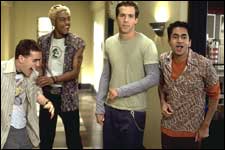 Mithun Verma / fullhyd.com
EDITOR RATING
5.0
Performances
Script
Music/Soundtrack
Visuals
NA
NA
NA
NA
Suggestions
Can watch again
NA
Good for kids
NA
Good for dates
NA
Wait for OTT
NA
"I want to ride the bike into the den. I want to take it into the car wash. I want to honk, honk, honk while it gets rubbed and scrubbed about. I want to blinga-linga-ling while juggling with jugs. I want to keep gyrating my hips and keep using this fake Indian accent to make people laugh. This is the funniest part of the movie. I want to ruba-dub-pup with some puppies! Oh, yeah..."

There. The only thing funny about Van Wilder, and his movie. Of course, he didn't say any of that trashy fluff. His assistant did, his dialogue writer did, and he followed them.

Van Wilder (Ryan Reynolds from that TV show that lasted about .0014 seasons - Two Guys, A Girl And A Pizza Place) is doodling his future in the banally clichéd Coolidge College. His stay at the shod-shack has grown to such iconic proportions that candidates need to take a terrific interview to become his assistant. That gives great opportunity for them to hang around with the coolest dud on the campus, and an even greater opportunity for the makers to shove the audition-comedy shtick into the drag.

Van has been living it up for 7 years in that college, and everyone just loves him. Except the people that matter the most - the audience. One fine day, his loaded dudly dad realizes that his capable son is in the seventh year of college. That's enough, he feels. He hadn't even gone to school for so many years! So he stops the college fee for his son. Though a harsh step, he realizes that it was very important for him to take that step. That is the only way to keep this movie going.

Without the greens from his dad, Van is left with no option but to raise his own funds for his tuition fee. He tries the concept of topless tutors. But that idea is soon recalled back for getting into trouble with the board. The censor board, that is. Then he realizes what he's good at - giving the same dopey expressions always... But since that will not make for an interesting, and more importantly a money-making, plot, he decides he's good at throwing parties.

All the geeks and nerds on the campus seek the help of the party liaison ,Van Wilder, to throw a fantabulously sexy party, to land chicks and fame. All this is being followed by a college newspaper reporter (Tara Reid - American Pie), the one who's supposed to make Van realize that all he's doing in life is partying, having fun and being happy. My God! What a waste of breath and blinking!

Whatever her problem was, Van seems to agree with it. Can't blame him, the girl's got depth. She keeps flaunting it by some interesting necklines as well. Van now decides he wants to graduate. More than the persuasion of the girl, it's something else that makes him to make that decision - one and a half hours are almost up. So, yeah, he does and he becomes an icon!

The puerile comic relief in the movie are Kal Penn (from American Desi) and Daniel Cosgrove (as Tara's grumpy boyfriend). Kal does manage to fabricate some fun moments in the film. The others, like disgusting old people interested in sex jokes, ugly body part witticisms, drunk children laughs, bad sexual experience hilarity, fraternity-with-inadvertently-naughty-initials (DIK) laughs, dog's genitals guffaws and so forth, are all yuck.

ADVERTISEMENT
This page was tagged for
van wilder party liaison full movie
Van Wilder - Party Liaison english movie
Van Wilder - Party Liaison reviews
release date
Ryan Reynolds, Tara Reid
Follow @fullhyderabad
Follow fullhyd.com on
About Hyderabad
The Hyderabad Community
Improve fullhyd.com
More
Our Other Local Guides
Our other sites
© Copyright 1999-2009 LRR Technologies (Hyderabad), Pvt Ltd. All rights reserved. fullhyd, fullhyderabad, Welcome To The Neighbourhood are trademarks of LRR Technologies (Hyderabad) Pvt Ltd. The textual, graphic, audio and audiovisual material in this site is protected by copyright law. You may not copy, distribute, or use this material except as necessary for your personal, non-commercial use. Any trademarks are the properties of their respective owners. More on Hyderabad, India. Jobs in Hyderabad.