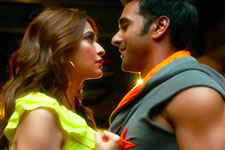 Daphne Rose / fullhyd.com
EDITOR RATING
3.0
Performances
Script
Music/Soundtrack
Visuals
2.0
2.0
3.0
3.0
Suggestions
Can watch again
No
Good for kids
No
Good for dates
No
Wait to rent it
No
"It is a truth universally acknowledged that a man in possession of a good (possibly illegal) fortune must be in want of a... legitimate way to spend it."

Okay, so I might just have paraphrased it a teeny bit but what gold, right? Miss Austen sure was a woman with wisdom beyond her years to have been able to successfully predict the proceedings of the Hindi film industry in the 21st century.

One often wonders how it must feel to be so rich as to willingly pump money into what everyone knows will be a failed endeavour, and not give a damn about it. Or maybe we're just being harsh for no reason. This film could've been the producer's choice of charity. Returns or no returns, with nearly 300 people employed for the 4-6 odd months it might've taken to make this film, this was possibly the producer's way of accumulating good karma. And what a lot of good karma at that. Make In India, ftw!

I'm feeling good about myself now for finally cracking open the mystery that had been plaguing me barely ten minutes into the movie. The mystery of why anyone would make a movie such as Veerey Ki Wedding in 2017. I mean, the nineties called and even they don't want this film back.

And why would they? Veerey Ki Wedding is what happens when a producer with boatloads of cash and a director with a distinct Punjab-in-Bollywood hangover are wedded. Add to this, a cast of good-looking but struggling lead actors along with 2-3 familiar character actors for some heft, and voila!

Said lead actors in this parody masquerading as a film are Pulkit Samrat as Veer and Kriti Kharbanda as Geet. The duo are in love (not right off the bat, 'coz we need a song and a half hour of aimless running around to contribute towards the run time, but get there eventually as they must). Trouble arises when Veer, who takes his name a tad too seriously and is a local vigilante of sorts, bashes up some goons in front of Geet's peace-loving father during a meet-the-parents, prompting daddy to withdraw his acceptance of the match. And now that the singular point of conflict in the movie has arrived, let the (not so fun) games begin.

Oh, and there's also Jimmy Shergill in the movie, cast in the role of Veer's veer (Punjabi for brother) who leaves no stone unturned to see his brother's match through but is kinda luckless in love himself. Did you just think Raja Awasthi from Tanu Weds Manu at that last part? Yeah, we did, too.

But then again, every actor in this film is a hark back to some character they've already played in the past. For example, while Samrat looks and acts like he does in every single movie of his, Kharbanda straight up seems like she sleepwalked from the sets of Shaadi Main Zaroor Aana.

Okay, we get it - originality can be a tough nut to crack. But what about at least delivering on what you claim to be? Because for a rom-com, which this film says it is, the comedy scenes aren't just unfunny, they're downright exasperating. You feel sorry for the actors, you do, because everyone's trying real hard in the precious little that's provided to them, but this is the kind of movie that would require something else entirely to make anything fly - a whole new movie, perhaps. 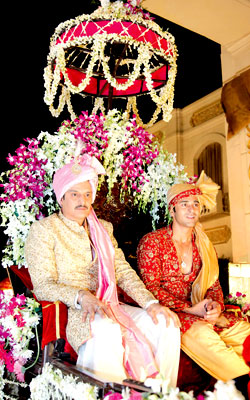 ADVERTISEMENT
This page was tagged for
Veerey Ki Wedding hindi movie
Veerey Ki Wedding reviews
release date
Pulkit Samrat, Kriti Kharbanda
theatres list
Follow @fullhyderabad
Follow fullhyd.com on
About Hyderabad
The Hyderabad Community
Improve fullhyd.com
More
Our Other Local Guides
Our other sites
© Copyright 1999-2009 LRR Technologies (Hyderabad), Pvt Ltd. All rights reserved. fullhyd, fullhyderabad, Welcome To The Neighbourhood are trademarks of LRR Technologies (Hyderabad) Pvt Ltd. The textual, graphic, audio and audiovisual material in this site is protected by copyright law. You may not copy, distribute, or use this material except as necessary for your personal, non-commercial use. Any trademarks are the properties of their respective owners. More on Hyderabad, India. Jobs in Hyderabad.