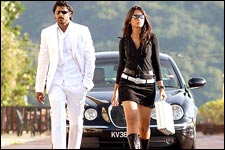 Deepa Garimella / fullhyd.com
EDITOR RATING
7.0
Performances
Script
Music/Soundtrack
Visuals
4.0
3.0
8.5
9.0
Suggestions
Can watch again
No
Good for kids
No
Good for dates
Yes
Wait for OTT
No
Billa (Prabhas) is a devious, scheming, cold-hearted criminal. His English is even worse. And when "Trust no one, kill anyone," gets too complex for him, he switches to "Can can."

Living in Malaysia, he is wanted in a dozen countries. Krishnamurthy (Krishnam Raju) is an ACP leading a troop of Armani-clad policemen after him, but at whose heels the Interpol is snapping for not being able to nab Billa. However, Krishnamurthy is a committed officer who puts in his 100% into his job. This explains why Billa escapes everytime the ACP has him surrounded - if he'd thought of putting in 200%, Billa would have escaped twice as many times as the ACP actually surrounds him.

Bursting the hip factor in through the door is Maya (Anushka), a girl wronged in Billa's hands, and who has now sworn revenge. Billa's girlfriend, Lisa (Namita), has never had a problem catching his attention until Maya's arrival. Now she starts uncovering more of her midriff, which puts it in the 0.00000023% of her body that already isn't.

During a chase, Billa and the ACP confront each other - which leads to Billa being packed off in a body bag. With the help of a local restaurant owner (Ali), the ACP brings in Billa's lookalike, the petty kind-hearted thief Ranga (Prabhas), all the way from Vizag. After getting trained, Ranga is now ready to become Billa. The rest of the story is a series of twists and turns that lead to the final two questions - who designed the clothes on these people, and can we get some, too?

Billa is, more than anything else, a packaging triumph. With blacks and whites, urban Malaysian landscapes, never-ending hangars, Ferraris, choppers, and well-dressed and important-looking men and women strutting between frames, all over it, you can be forgiven for wondering where the script is going. And the makers are forgiven for not bothering to wonder where the script is going.

The first half sassily shoves the gloss into your face - Prabhas swashbuckles, the women parade their stuff, and car chases and shoot-outs are all over the place. The second half goes on for way too long. If there still is anyone out there who hasn't watched the remake of that iconic film, we recommend watching the film your way - one with no lasting memory of the remake or of the original.

Performance-wise, Billa has only Anushka to speak of in the entire film, and we can't get enough of her razzle-dazzle. Though not much of a character (like everyone else's in the film), Maya is the only one that instantly connects to you. Prabhas is wooden but blazes the screen all the same. Krishnam Raju acts like Prabhas' uncle for sure - more wooden. Namita is, er, too healthy to be wearing the clothes she is (or isn't), and her dialogue delivery and acting are only secondary issues.

With thumping music and a techno-touch to his songs, Manisharma doesn't miss a beat, and Bommali must be the catchiest of all the tunes.

If you're in the mood to watch a hot babe and a hot hunk race around to some smoking music, watch this one - it won't play havoc with your brains.
Share. Save. Connect.
Tweet
BILLA SNAPSHOT

RATING
5
anilteja on 7th Apr 2009, 12:44am | Permalink
fairly gud movie with gr8 cinematography.....its is not as bad as people say abt it...apart from prabhas and krishnamraju's english...movie was fine...

one notabel part is the background score by manisharma....he has done his part well....

Siva on 6th Apr 2009, 4:55am | Permalink
i had the misfortune of watching this movie. Firstly, This review is in the right tone, funny and scathing, but I guess reviewer just insulted and cheapened herself by giving it a 7. movie is just plain horrible and I am sure in spite of no competition it at best will be a average run at Box office.

ADVERTISEMENT
This page was tagged for
billa movie hot picture prabash
Liza Maya and bila movie
billa movie review in telugu
High quality billa-south movie
Billa telugu movie
Follow @fullhyderabad
Follow fullhyd.com on
About Hyderabad
The Hyderabad Community
Improve fullhyd.com
More
Our Other Local Guides
Our other sites
© Copyright 1999-2009 LRR Technologies (Hyderabad), Pvt Ltd. All rights reserved. fullhyd, fullhyderabad, Welcome To The Neighbourhood are trademarks of LRR Technologies (Hyderabad) Pvt Ltd. The textual, graphic, audio and audiovisual material in this site is protected by copyright law. You may not copy, distribute, or use this material except as necessary for your personal, non-commercial use. Any trademarks are the properties of their respective owners. More on Hyderabad, India. Jobs in Hyderabad.