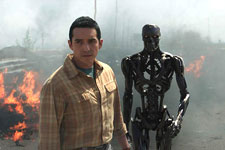 Punarvasu Pendse / fullhyd.com
EDITOR RATING
6.5
Performances
Script
Music/Soundtrack
Visuals
7.0
5.0
6.0
7.0
Suggestions
Can watch again
Yes
Good for kids
No
Good for dates
No
Wait for OTT
No
Terminator: Dark Fate is the movie you have been waiting for since Terminator: Judgement Day, if you are a fan of the Cameron franchise. It might have something to do with the fact that Dark Fate carries over from T2, ignoring the less-than-stellar movies in between; or it might be due to James Cameron being back on board this time; but likely because this one is all Sarah Connor, baby!

Tim Miller, who made his directorial debut with the much-loved Deadpool, shows that he can reel you in with riveting action sequences once again, but tones down the humour while retaining its punchiness, which induces quite a few unexpected laughs through its 128-minute runtime.

Skynet may have been vanquished, but John Connor is no more. Instead, we have Grace (Mackenzie Davis) back from the future to protect a young Daniella Ramos (Natalia Reyes) - some sort of a throwback to the original Terminator. Only, Grace is an augment - a cybernetically enhanced human being who has the ability to utilize short bursts of superhuman strength - and Natalia is not as prepared as Sarah Connor was, while the T-1000 is replaced by Rev-9 (Gabriel Luna), who is faster, more perceptive and definitely more dangerous.

Enter Sarah Connor (Linda Hamilton), all guns blazing. Connor rescues the two women being chased, and we learn that she has been dealing with Terminators ever since - and the women are strangely drawn from Mexico to Texas in the USA. Drawn to one Carl (Arnold Shwarzenegger), husband and father, master of drapes - and with a slightly damaging secret from the past. Connor and the T-800 struggle to make their peace, and Dani struggles to find her identity - and the Terminator franchise's struggle to make its return after multiple lacklustre films might finally be on track.

We here at fullhyd.com generally talk about the plot before we move on to the performances, but we are taking a different stand here. Sarah Connor was an integral part of the original Terminator movies, and Linda Hamilton's damsel-in-distress-turned-tough-talking-badass was something neither Game Of Thrones star Emilia Clarke nor Lena Headey could match. From her entry here (super fitting, and super fun), to her bond with Dani, and finally to her realisation that Judgement Day is all but inevitable - Hamilton carries the film.

Of course, she is helped by the script which goes back to the basics. Stripping the series of all convoluted ideas - *cough* alternate timelines *cough* - Terminator: Dark Fate is like a B-movie (which is what the original was, let's be honest) that is made with the care, the budget and technology of a big Hollywood title. And it works, frankly - you can feel the constant pressure the three women are under, playing this grand game of cat and mouse.

Terminator: Dark Fate also brings back something we have sorely missed - the human element. It explores the human-Terminator dynamic between Sarah Connor and the T-800, and also the fact that "Carl" now has a family. There are multiple jokes about this, which made us chuckle, but they do not downplay the capability of Carl to experience emotion. The relationship is not physical, he says, but they are a family allright. Experiencing love the way the humans did was considered a weakness by Skynet and its Terminators, but the T-800 has come to learn that it really isn't. And we believe that.

Natalia Reyes is the surprise package here. We didn't see much of her in the trailer, which focused on Linda Hamilton and Mackenzie Davis more. Reyes' Dani brings the same vulnerability that a young Sarah Connor did, and her transition to badassery is equally fun. Mackenzie Davis is pretty on point in the action scenes - her short-cropped cut and steely demeanour screams that Grace is all business, no bullshit.

"Ahnuld" takes a support role here, and really shines at it. His give-and-take with Hamilton is still great, and his more nuanced character is a surprising yet welcome addition to the movie. Gabriel Luna as Rev-9 is menacing, with his ability to make his truly creepy endoskeleton double up as another Terminator making him an excellent character to root against.

Tom Holkenborg has been doing some good work on a variety of action and superhero flicks recently, and Terminator: Dark Fate is no exception. You hum along to the music during the action scenes, and the movie seems more life-like because the action is relentless.

If it seems like the review is altogether too positive, this should clear it up: let us be very clear, Terminator is a series that should have died with T2, and Terminator 3: Rise Of The Machines was a mistake. Atoning for it in 2019, after making two movies which were even worse than Terminator 3, doesn't quite make up for the crap we have had to endure.

So if you don't like the franchise, skip this - you lose nothing. But for those of us who still have a soft spot for the OG Terminator, and for Sarah Connor, this one is definitely watchable. 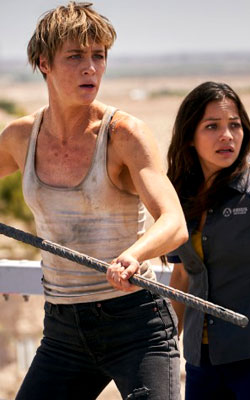 ADVERTISEMENT
This page was tagged for
Terminator: Dark Fate english movie
Terminator: Dark Fate reviews
release date
Linda Hamilton, Arnold Schwarzenegger
theatres list
Follow @fullhyderabad
Follow fullhyd.com on
About Hyderabad
The Hyderabad Community
Improve fullhyd.com
More
Our Other Local Guides
Our other sites
© Copyright 1999-2009 LRR Technologies (Hyderabad), Pvt Ltd. All rights reserved. fullhyd, fullhyderabad, Welcome To The Neighbourhood are trademarks of LRR Technologies (Hyderabad) Pvt Ltd. The textual, graphic, audio and audiovisual material in this site is protected by copyright law. You may not copy, distribute, or use this material except as necessary for your personal, non-commercial use. Any trademarks are the properties of their respective owners. More on Hyderabad, India. Jobs in Hyderabad.