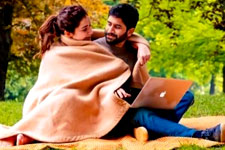 Sai Tulasi Neppali / fullhyd.com
EDITOR RATING
3.0
Performances
Script
Music/Soundtrack
Visuals
6.0
3.0
6.0
6.5
Suggestions
Can watch again
No
Good for kids
No
Good for dates
No
Wait for OTT
No
Some stories come to the big screen with a sense of urgency and purpose - rattling their cages, aching to be set free. Yet others are made to be spectacles, purely for entertainment purposes, brief escapes from the dullness of our everyday lives. Thank You, though, belongs to that third category of stories that should never have been made at all. Someone should have put the kibosh on it while it was still a scribble on the back of a napkin, a half-baked pitch, a distant glimmer in the eye of the writer. Limp and lifeless as it is, it should have been declared DOA?-?dead on arrival.

Thank You tells the story of Abhiram (Naga Chaitanya), an entrepreneur who turns arrogant and egomaniacal in the face of success. But a shocking consequence of his behaviour forces him to reassess his life. Revisiting all the important people of his past, he comes to realize that is he no island, and that many have had a hand in his triumphs. To each of them, he says a heartfelt "thank you", and returns home a humbled man.

For a story of self-discovery and metamorphosis, Thank You has shockingly little depth. All subtlety and nuance are thrown out of the window. Instead, we get improbable characters and far-fetched scenarios. Case in point?-? Abhiram's company, Y-dhya, creates an app that is able to "X-ray" a hand using a phone camera, and diagnose diseases with a drop of blood. (Theranos 2.0?) In just four years, Y-dhya goes public and its offices take over the iconic Rockefeller Center building. Abhiram's grave face is plastered on magazine covers; he is feted with a Madam Tussauds wax statue. And yet, he still has the emotional intelligence of a toddler.

Abhi first lands in New York, wide-eyed, his head full of dreams, with the help of Mr. Rao (Prakash Raj), the owner of a visa consultancy. Rao's family friend Priya (Rashi Khanna), who volunteers to help Abhi settle in, finds herself drawn to his passion and determination, to his almost childlike innocence. When he decides to create Y-dhya, she writes him the first very check. Soon they begin a relationship and move in together. But as Abhi's company grows, so does his ego, and a rift begins to form in their relationship. He lashes out at any mention of the word "we". "It's all me," he pounds the table. He fires employees without remorse; insults Mr. Rao; barely glances at his girlfriend.

Abhi's moment of reckoning finally arrives in the form of a panic attack, when Priya leaves him and he realizes that he is truly alone. In a Dickensian twist, Abhiram meets his conscience, a glowing form of himself, that prods him to return to India and remember his humble roots. He travels back to his hometown, and there he meets the two people who have helped shaped his destiny unbeknownst to him - his first love, and his biggest foe. When he reframes his past experiences, he is filled with gratitude, and is finally rid of his demons.

Despite the serious ongoings - death and pregnancy, redemption and transformation?-?the stakes in the movie feel extremely low. Why must we watch this man, Abhi, go on his little sorry-and-thanks tour? Couldn't he just write some letters? Or pen down his thoughts in a journal?

The story makes use of so many tropes to fill up the minutes, that you feel very emotionally distant from it: a poor boy falls in love with a rich girl, an overprotective father threatens to kill any man who comes near his daughter, a college rivalry devolves into goondaism, and there's a farewell song nobody asked for.

Perhaps overcompensating for this lack of depth in the storytelling, veteran cinematographer P C Sreeram chooses to use close-up shots for every emotion-laden scene. But in effect, it is distracting. It's all disembodied cheeks and noses, that you can't help fixating on insignificant details like the gap between someone's teeth, the arch of a nose, a blooming pimple, or an enlarged pore. For example, when Priya cries, her face fills up the screen, her tears as thick as arms. It doesn't make you feel any sorrier for her.

The lacklustre story is made duller by Naga Chaitanya's dry acting. He is a cardboard cutout - flat, devoid of any vigour. When he plays the "conscience", he tries to be more performative, gesturing, intoning his voice, but he comes across as a novice actor, fresh off the boat. Rashi Khanna has little to do but sulk or cry, which she at least does with some dignity and nuance. Malvika Nair, who plays Abhi's first love Paaru, gives a charming and delicate performance. Avika Gor, who plays the sister of Abhi's college rival, is the closest the movie has to a playful, humorous character.

Thank You has nothing original or inventive to say or show you - especially egregious given the big names involved and the resources available to them (Dil Raju is a producer). It is boring and pointless, shallow and gratuitous. It belongs in whatever graveyard bad movies get sent to, buried six feet underground, never to see the light of day again.
Share. Save. Connect.
Tweet
THANK YOU (TELUGU) SNAPSHOT 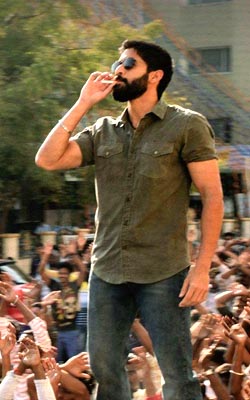 I did not watch this movie, but feel sad that a director like Vikram Kumar made such a movie which got only 3 stars. With movies like Isque and Manam I have high expectations from him.

ADVERTISEMENT
This page was tagged for
Thank You (Telugu) telugu movie
Thank You (Telugu) reviews
release date
Naga Chaitanya, Rashi Khanna
theatres list
Follow @fullhyderabad
Follow fullhyd.com on
About Hyderabad
The Hyderabad Community
Improve fullhyd.com
More
Our Other Local Guides
Our other sites
© Copyright 1999-2009 LRR Technologies (Hyderabad), Pvt Ltd. All rights reserved. fullhyd, fullhyderabad, Welcome To The Neighbourhood are trademarks of LRR Technologies (Hyderabad) Pvt Ltd. The textual, graphic, audio and audiovisual material in this site is protected by copyright law. You may not copy, distribute, or use this material except as necessary for your personal, non-commercial use. Any trademarks are the properties of their respective owners. More on Hyderabad, India. Jobs in Hyderabad.