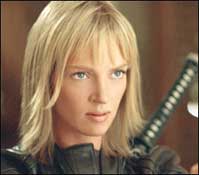 Charisma Murari / fullhyd.com
EDITOR RATING
7.0
Performances
Script
Music/Soundtrack
Visuals
NA
NA
NA
NA
Suggestions
Can watch again
NA
Good for kids
NA
Good for dates
NA
Wait for OTT
NA
KBV2 is not exactly for those who cottoned to Titanic. It isn't even for everyone who liked the first volume. This is strictly for those who either carouse in Tarantino's work or loathe him with a passion. Or for those who, simply, have an appreciation for a movie well-made.

Volume 2 is intriguingly perverse. Tarantino's characters are a curious blend of ruthlessness, depravity and sympathy, and he showers careful, loving attention on all of them.

Chapter 6 opens with The Bride (Uma Thurman) still coxswaining along her retribution trail, weeding out those who wronged her. Tarantino re-introduces Budd, only this time as a former assassin who is now reduced to cleaning out clogged toilets at the empty strip-club where he works as a bouncer. And as the guy who believes that The Bride deserves her revenge, but who would gladly help her over a cliff. Or over the edge of a freshly dug grave.

And when she lies there in the grave, gasping and panting furiously for air, Tarantino cleverly changes the aspect ratio from cinemascope to television shape, compelling the audience to feel the constrained, confined, claustrophobia. And then he demonstrates, brilliantly, how he can play with time frames, and how chronology is of little importance if there is a master at the helm.

As the heroine lies in her grave, Tarantino takes you back to the time she was training under the Kung Fu great, Pai Mei. As The Bride surrenders completely to Master Pai Mei, no ego, no humiliation, just the will to learn, you realize that it is, on many levels, the submission of Uma Thurman to Master Tarantino.

She resurrects herself from the bosom of the earth, and sets out to bump-off Budd, only to find that her nemesis, Elle Driver (Daryl Hannah), has beaten her to it. But after the showdown between the women, The Bride only has one remaining mission: to kill Bill.

The story, when narrated, might seem frivolous, but is something that you drift along with nicely; deeply interested, yet, curiously, unattached to the characters.

The encounter with Bill is anti-climactic, but not deus ex machina. The affectionate scenes with their daughter BB are amazingly transformational for the characters, and the transformation itself, from cold and calculating to warm and vulnerable, is disconcerting.

But will she kill Bill after the moments of tenderness? Almost surprisingly, through and despite the affection, both of them are gunning for each others' blood. And when she succeeds, you feel her grief as she mourns for the father of her child, the man she loved.

The build-up to the moment of action, throughout the movie, is almost enervating; the payoff at the end, however, is small. KBV2 is, in patches, morbid, but never about a gore-fest. A lot of people would, perhaps, be a trifle disappointed with the 'simple, quick' manner in which Bill is slain, but that, in so many ways, is Tarantino. You want to hear what he has to say, even if it isn't what you want to hear.
Share. Save. Connect.
Tweet
KILL BILL 2 SNAPSHOT

ADVERTISEMENT
This page was tagged for
Kill Bill 2 english movie
Kill Bill 2 reviews
release date
Uma Thurman, Daryl Hannah
theatres list
Follow @fullhyderabad
Follow fullhyd.com on
About Hyderabad
The Hyderabad Community
Improve fullhyd.com
More
Our Other Local Guides
Our other sites
© Copyright 1999-2009 LRR Technologies (Hyderabad), Pvt Ltd. All rights reserved. fullhyd, fullhyderabad, Welcome To The Neighbourhood are trademarks of LRR Technologies (Hyderabad) Pvt Ltd. The textual, graphic, audio and audiovisual material in this site is protected by copyright law. You may not copy, distribute, or use this material except as necessary for your personal, non-commercial use. Any trademarks are the properties of their respective owners. More on Hyderabad, India. Jobs in Hyderabad.