The Legend of Michael Mishra Review 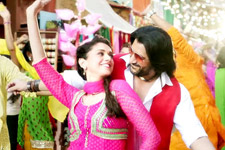 Jaiwantika Dutta-Dhupkar / fullhyd.com
EDITOR RATING
2.0
Performances
Script
Music/Soundtrack
Visuals
5.0
1.0
2.0
5.0
Suggestions
Can watch again
No
Good for kids
No
Good for dates
No
Wait to rent it
No
The Legend Of Michael Mishra revolves around a childhood love gone awry. Michael Mishra, juvenile delinquent, spots young Varsha Shukla on a sunny morning in Patna, and it's love at first sight. It's a love that will last the years - including jailbreaks and all the twists and turns of criminal life.

Mike grows up to become the dreaded don "Bhaiyyaji" Michael Mishra (Arshad Warsi, dependable, talented), and Varsha (Aditi Rao Hydari, pretty, and good) grows up to become an aspiring singer-actress with high ambitions. Years later, when Michael spots Varsha reciting an endearing cow rhyme on the Bihar Is Full Of Talent stage, he instantly recognizes The One from his childhood. However, she fails to recognize him, and he has to painstakingly woo her.

Prompted to change his ways if he wants to be with her, Michael ultimately ends up in "kaalapaani", after surrendering and being sentenced to rigorous imprisonment. In the jail, Michael is robbed and beaten to pulp by savage inmates, until he discovers an old sewing machine and his hidden sewing skills (he was a tailor before turning goon), and sews rainbow-colored, bathrobe-style uniforms for all the prisoners.

Meanwhile, Varsha, an aspiring actress, runs away from home, abandons her dog "Chocolate", and turns up at an audition for Bihar Is Full Of Talent, where she is summarily rejected. That is what ought to happen to people who are cruel to animals, you think - till she meets the director of a film while she's drudging away serving coffee in what is currently India's Most Fashionable Naukri, and lands her first film role.

At Kaalapani meanwhile, Michael saves the jailor (Yuri Suri) whose leg is caught underneath a large boulder during an explosion (long shot of Michael picking up a boulder with his bare hands and flinging it a foot away). In return, the grateful jailor allows Michael to escape off a jetty during a Prison Fishing Expedition. Michael, in his self-sewn coat of many colors, plunges into the Indian Ocean and swims right across. This film takes so many cinematic liberties, it's small wonder that it's releasing in August.

The Legend Of Michael Mishra jerks off to a bizarre start: all slow-mo, bass voice-over, flashbacks and cinematic tints. If you're even five minutes late, you will miss crucial bits of the plot, for the screenplay follows the classic "inverted pyramid structure": it tells important anecdotes first and trivial ones after.

Also, with such extensive use of medieval narrative techniques like the aforesaid flashback, voiceover and so on, The Legend... is really instant noodles when what you're after is "propah" Chinese. Allusions to old '80s and '90s movies are rife, and are scattered all through the screenplay (Manish Jha) but all that cinematic name-dropping hardly does anything for the film. You're unlikely to have watched so many sincere glorifications of stereotypes and clichés in one single comedy film, especially one that appears to be spoofing something.

Indeed, the story by Manish Jha, Radhakrishnan and Sneha Nihalani is the main villain. The stereotypes are plain criminal. For instance, at the audition for Bihar Is Full Of Talent, Varsha Shukla recites a childish rhyme about cows and wins hearts. She later tries to pull off a similar stunt again at a film audition, without much luck. Afterwards, when she's shown serving coffee, we just KNOW she's on the brink of stardom.

Then, there's a temple scene - complete with a bell that Sunday devotees like Michael can ring till their hands bleed and clouds burst - and some half-hearted efforts to project Michael as a criminal with a golden heart. And they all lack sincerity. That's the actual problem with the film. It has a more or less talented cast and crew but it reeks of fakeness.

The movie makes an effort at some sort of love triangle as well - where Hydari has the hots for a Bob Marley-type - but that seems like a bit of an afterthought, and doesn't get more than fifteen minutes of screentime.

The movie is theoretically well-cast - its actors should normally make for good watching - but they're wasted in the film. Not a single character is clearly etched, and even acclaimed actors like Warsi, Hydari and Boman Irani can't salvage things. Kayoze and Boman Irani add some comic relief, though the former grates on your nerves as the film progresses.

The music is truly pathetic, almost deliberately so. Every song is an absolute disaster, and even the item song fails despite the pretty lead.

The art direction is kitschy, and images of Michael Mishra's tarty boudoir, with its gold-painted furniture, multi-colored bulbs, neon signs, mannequins and fur cushions, will haunt you for a week at least. The movie has nice production values, though, and the cinematography (Manoj Soni) is one of the good things about the film.

It's hard to understand why director Manish Jha would want to make such a film - his oeuvre is totally in the horror-thriller genre, and rom-com is not his thing. There's a scene in the movie where an old blind "fakir" psyches Michael into changing his ways (assuming the film believes love isn't enough to do the job of reformation effectively). This fakir gets about five minutes of spine-chilling screentime that culminates in evil laughter. Repeat: it's the horror-thriller genre that is Manish Jha's genre.

All in all, The Legend Of Michael Mishra is a confused, bizarre film, and an insincere effort. It has too many loose ends, and much of the storytelling is left to faulty narrative devices. Not a film you'd catch even on TV.
Share. Save. Connect.
Tweet
THE LEGEND OF MICHAEL... SNAPSHOT
THE LEGEND OF MICHAEL MISHRA SNAPSHOT

ADVERTISEMENT
This page was tagged for
The Legend of Michael Mishra hindi movie
The Legend of Michael Mishra reviews
release date
Aditi Rao Hydari, Boman Irani
theatres list
Follow @fullhyderabad
Follow fullhyd.com on
About Hyderabad
The Hyderabad Community
Improve fullhyd.com
More
Our Other Local Guides
Our other sites
© Copyright 1999-2009 LRR Technologies (Hyderabad), Pvt Ltd. All rights reserved. fullhyd, fullhyderabad, Welcome To The Neighbourhood are trademarks of LRR Technologies (Hyderabad) Pvt Ltd. The textual, graphic, audio and audiovisual material in this site is protected by copyright law. You may not copy, distribute, or use this material except as necessary for your personal, non-commercial use. Any trademarks are the properties of their respective owners. More on Hyderabad, India. Jobs in Hyderabad.