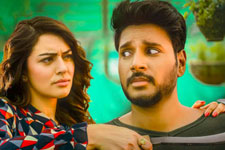 One more person falls in the last, and illustrious, category of talents not featured in the film because they have nothing to do with it. And that is the poor soul called the writer. It's time to sample some of Tenali Ramakrishna BA BL's charming wit and wordplay.

Thank you. Thank you for reading, and agreeing with us that there was no writer involved with the making of this film.

Before you weigh in on our ignorance for equating dialogue with writing, we shall inveigh against that allegation by pointing out that there is no other writing either.

The Varalaxmi Sarathkumar character is the good lady. She helps people. We are to know because the voice-over says so. Not a single shot of a family being thankful to her or people sloganeering for her. The voice-over declares it and we are to accept her as a gold-hearted person.

She is implicated in a murder case (and she is definitely guilty of murdering Telugu by gobbling up syllables each time she utters something). Her case is being fought by a useless upstart Tenali Ramakrishna (Sundeep Kishan). He is fighting against a highly accomplished, but villainous, lawyer (Murali Sharma) who is trying to win the case by fabricating a false witness - a couple who are to claim to have witnessed the murder.

This is fairly standard courtroom comedy film procedure. It would work, too, if it got a bit of writing. However, here the highly accomplished and crushing lawyer loses his case because he forgets to train his witnesses to tell the same story. You don't need a David nor a writer if your Goliath loves to play Russian Roulette and forgets to empty his fully-loaded revolver.

The general laziness of today's comedies is intensified in Tenali Ramakrishna BA BL. The funny parts are supposed to be Chammak Chandra's drag acts which you may have already seen too much of in Zabardasth (once is too much), that Hansika Motwani's character is super dumb (breaking news?), and at least two men being assaulted in their madhya pradesh. You may also laugh at the audience being assaulted in our uttar pradesh?

The cast can make you downcast. But not if you are a competent director yourself. Sadly, G Nageswara Reddy is not a patch on S V Krishna Reddy. Nageswara Rao's sense of humour is base, and not even crudely clever. His story-telling capability is heavily dependent on voice-overs, and his characters bending over backwards to have their dialogues provide exposition. The only way he gets this movie to stand is on the crutches of his technical talents.

Thus, the only talents featured in Tenali Ramakrishna BA BL are those in the music (Sai Kartheek), camera (Sai Sreeram), editing, action choreography, dance choreography and all other departments of the 'for-hire' variety who don't care what film it is. They just deliver their good work and it's for the filmmaker to use it or waste it.

Hiring talent and hoping it'll make a film work reminds one of that German couple of eight years who were healthy, fertile, and yet childless. The doctors they approached performed all tests with no clue as to how they couldn't conceive at all. They later learnt that the couple missed out on a very crucial aspect - sex. The deeply devout couple had no idea about what sex was, and just imagined that if they were devout enough God would bless them with a baby.

We're just saying, a film is like a filmmaker's baby. You can't expect the storks to bring it to you, however well you are willing to pay them.
Share. Save. Connect.
Tweet
TENALI RAMAKRISHNA BA BL SNAPSHOT 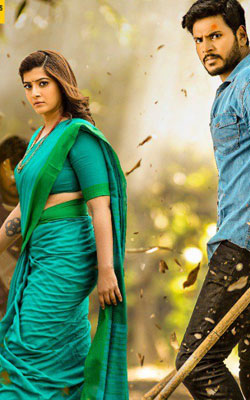 ADVERTISEMENT
This page was tagged for
Tenali Ramakrishna BA BL latest telugu movie online
Tenali Ramakrishna BA BL telugu movie
Tenali Ramakrishna BA BL reviews
release date
Sundeep Kishan, Hansika Motwani
Follow @fullhyderabad
Follow fullhyd.com on
About Hyderabad
The Hyderabad Community
Improve fullhyd.com
More
Our Other Local Guides
Our other sites
© Copyright 1999-2009 LRR Technologies (Hyderabad), Pvt Ltd. All rights reserved. fullhyd, fullhyderabad, Welcome To The Neighbourhood are trademarks of LRR Technologies (Hyderabad) Pvt Ltd. The textual, graphic, audio and audiovisual material in this site is protected by copyright law. You may not copy, distribute, or use this material except as necessary for your personal, non-commercial use. Any trademarks are the properties of their respective owners. More on Hyderabad, India. Jobs in Hyderabad.