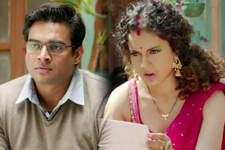 Nupur Barua / fullhyd.com
EDITOR RATING
7.0
Performances
Script
Music/Soundtrack
Visuals
8.0
6.0
6.0
7.0
Suggestions
Can watch again
Yes
Good for kids
Yes
Good for dates
Yes
Wait for OTT
No
When Hindi cinema wants to show a woman bored with her marriage, yearning for what might have been, and getting away with the most audacious behaviour, there is only one person who can do justice to the character - Kangna Ranaut. After Queen, the curly-haired actor has become the reason people buy tickets to her movies, no matter how badly executed they are (think Revolver Rani). With Tanu Weds Manu Returns, the sequel to Tanu Weds Manu, Ranaut does not disappoint, and the best part? There are two of her!

Four years after the rather dramatic wedding in which guns were drawn and lives were threatened, Manu (R Madhavan) finds that his wife, Tanu (Kangna Ranaut), is impossible to live with. He takes her to a psychiatric facility in the English countryside, and tries to prove to a board of psychiatrists that she is bipolar - her mood swings are unpredictable.

When Tanu gets a chance to voice her opinion, she complains that Manu is not only boring and getting fatter, but has also trapped her into a life of monotony. Manu becomes agitated when she declares that he snatched her away from her one true love, and he is eventually locked up for further examinations.

A rather relieved but still bored Tanu decides to fly home from London to her home town Kanpur, especially after she receives a call from her best friend Payal (Swara Bhaskar), who has just become a mother. However, she does call Pappi (Deepak Dobriyal) to tell him that his best friend is in a mental asylum and that he needs to bail him out. Manu and Pappi then fly back to India, and after much deliberation, Manu sends Tanu a notification for divorce.

Tanu discovers that her room has been given away to a paying guest, Chintu (Mohammed Zeeshan Ayub), whom her family has been trying to get rid of, forever. Chintu becomes her confidant and lawyer, and Tanu begins to revisit her old haunts once again, and her ex-boyfriends, most of them married. Chintu, who considers her the Batman of the area, is intrigued, and then obsessed with her. And then she meets up with Raja Awasthi (Jimmy Sheirgill), the man that Manu had to stand up to, to marry her.

Pappi is in love with Komal, who is related to Jassi (Eijaz Khan), Payal's husband and Manu's best friend. Manu says he will help him out, but he sees Kusum, a.k.a. Datto (Kangna Ranaut), at the college where he is guest lecturing. She bears an uncanny resemblance to Tanu, and Manu finds himself following her, much to Pappi's embarrassment. Datto is a state-level athlete, and a college student.

When the overzealous and very jealous Chintu sends him divorce papers, Manu discovers a growing attraction to Datto. Tanu is still painting Kanpur red, Raja is still in love with Tanu, Chintu is still trying to win Tanu over, and Pappi is still hankering after Komal. With Payal harbouring a secret about her child, and with Datto's relatives opposing her relationship with Manu, various showdowns are inevitable, but will Manu and Tanu find their own paths and loves?

This is Tanu's story, more than Manu's. The screenplay touches upon issues such as the monotony of marriage, and the melancholy that is overlooked in such situations. The writer very cleverly makes Tanu a bohemian character, and her eccentricities that cause her family embarrassment are easy to blame on her complete disregard of norms.

However, there is a graver problem here - nobody realises just how depressed Tanu is, since they attribute everything to her rebellious nature, especially when she comes out draped in a short towel to greet her cousin's prospective husband. When she breaks down in front of Manu, and he acts cold, she buys a wig to look more like Datto. She also wonders, when she is in London, if life would have been more exciting had she married Raja.

This flakiness and lack of depth is not admirable, but it makes Tanu's character very real. She is no pioneer, nor is she a hero, but she is delusional and ditzy enough for you to overlook her selfishness and self-obsession. Manu, on the other hand, who has always done things by the book, is a new rebel, and is determined to prove to himself that he is not predictable and boring. He has just turned 40, and is on the brink of a mid-life crisis, which is why he creepily stalks a much younger woman - to make amends to and to relive a life that he thinks he messed up.

The screenplay also mentions the pressure a woman has to face to have a child, and what she can do to make all the talk go away. In a small society that represents Indian society in general, sneaking (to smoke, to drink, to abuse) is an accepted part of life, and everybody has so many secrets that nervous breakdowns are always right around the corner. The script has some terrific dialogues, and, more importantly, plenty of humour to ascertain that this does not become a preachy, dull, and depressing movie, despite the situations that the characters find themselves in.

On the flip side, both sets of parents, those of Tanu and Manu, do not get the importance they had in the first movie, and some plot points, such as the kidnapping and the Haryanvi family's reactions and resolution, are just plain ludicrous, and you will pretty much predict how the story will end. The second half drags on for a bit. Datto's speech is not always easy to understand. And there are too many celebratory occasions in the script - the title montage begins with the wedding of Tanu and Manu, which is fun, but then there is also the bhangra-garba, the engagement, the weddings, the havans - you get the gist.

Kangna Ranaut in a double role is a bonanza for any film lover. She continues her role as the spoilt and self-indulgent Tanu, but she also plays, with élan, an independent and headstrong Datto. She grabs your attention from the beginning, and pretty much monopolises the screen whenever she appears. Her lack of self-consciousness is praise-worthy, as she delves into the characters that she plays.

Madhavan is more mature now than he was when the first movie came out, and he still underplays his role as the NRI doctor. He is sincere and convincing. Jimmy Sheirgill lacks the fire he had in the first movie, but, as Tanu tells Payal, he looks very hot. He concentrates on playing the voice of reason, and has some good dialogues to go with his character.

Mohammed Zeeshan Ayub is a treat, and so are Swara Bhaskar, Eijaz Khan and Rajesh Sharma. However, it is Deepak Dobriyal who steals the show with his quirky character. He is the comic relief in a comedy, and he does a great job of it.

With just a few sequences shot in London, the film is mostly set in small-town India - Kanpur, Chandigarh, Haryana. The production design does not make them look too different from each other, or from Delhi. It is clear, though, that the story is set in North India, and the attitude and customs are general in presentation.

Ranaut gets some blingy costumes as Tanu, and some asexual clothes as the athletic Datto, and these bring out the characters. The other actors do not have flamboyant clothes, but make do with muted colours.

The cinematography is above average, but not revolutionary. The music is decent, with Banno already topping charts, and Old School Girl being very catchy in both English and Haryanvi. Mat Ja Re is soulful and O Sathi Mere is romantic and nostalgic. The editing could have been crisper, especially in the second half.

Despite the relatively flimsy story (when compared to that of the first installment), Tanu Weds Manu Returns is not a movie you watch for logic, but for Kangna Ranaut. It is commendable how she carries off both roles. In fact, you are likely to forget who she is when you watch Datto doing her stuff. This is one film that you must definitely catch this weekend - it has plenty of laughter, love and audacity, and, again, Kangna Ranaut in a double role.
Share. Save. Connect.
Tweet
TANU WEDS MANU RETURNS SNAPSHOT 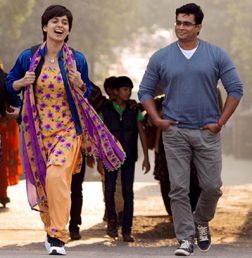 ADVERTISEMENT
This page was tagged for
Tanu Weds Manu Returns hindi movie
Tanu Weds Manu Returns reviews
release date
Kangana Ranaut, R Madhavan
theatres list
Follow @fullhyderabad
Follow fullhyd.com on
About Hyderabad
The Hyderabad Community
Improve fullhyd.com
More
Our Other Local Guides
Our other sites
© Copyright 1999-2009 LRR Technologies (Hyderabad), Pvt Ltd. All rights reserved. fullhyd, fullhyderabad, Welcome To The Neighbourhood are trademarks of LRR Technologies (Hyderabad) Pvt Ltd. The textual, graphic, audio and audiovisual material in this site is protected by copyright law. You may not copy, distribute, or use this material except as necessary for your personal, non-commercial use. Any trademarks are the properties of their respective owners. More on Hyderabad, India. Jobs in Hyderabad.