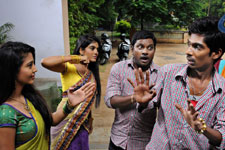 Ravi Kandala / fullhyd.com
EDITOR RATING
2.0
Performances
Script
Music/Soundtrack
Visuals
2.0
2.0
1.0
1.0
Suggestions
Can watch again
No
Good for kids
No
Good for dates
No
Wait for OTT
No
The heroines in this movie say it all - one of them calls Dhanraj a stick wearing a shirt while the other calls Ramesh a drum of tar wearing trousers. So we have a stick and a drum of tar as the heroes, 2 plastic figurines as heroines, and a host of comedians to buffer this lead cast. What AK Rao PK Rao lacks are a story, funny lines, a half-decent screenplay, and some conviction in trying to convey the message it purports to care about.

The film begins in Amalapuram where brothers A K Rao (Dhanraj) and P K Rao (Thagubothu Ramesh), who have completed their MBAs in Hyderabad, return to sell women's wear of all sorts. This they do in a trolley-auto driving around the streets and uttering double-meaning dialogues to a plethora of women, all of who only seem to have thoughts of seducing the neighbour.

The sole competitor to their business is KB (Krishna Bhagwan - use the initials and you don't even have to think of a name for the character!), who sells sarees in an auto himself. The only competition between him and our duo seems to be in terms of who can utter the sleazier lines.

AK and PK take away all of KB's business, and KB plans revenge by implicating the duo in a crime and getting them behind bars. One scene later, AK and PK come out of prison in a jeep dressed in suits and with guns in hand that they keep firing in the air. They return to Amalapuram and tell their father that they have a vision and will develop Andhra Pradesh. Their first deed is to provide drinking water to a group of warring housewives from a fire truck, and the second is to open a clothes showroom and provide work to a group of sex-workers. The parents of these sex-workers come and tell PK that their girls are no longer call girls, but are sales girls, thanks to him and his brother.

They do many such good deeds which include castration of two rapists (artistically depicted by the snipping off of a pair of guavas hanging from a stick), and saving of girls who have been imprisoned to be sold off to a Dubai-based don named Dawood (Raghu Babu). Dawood gets angry, and comes to Amalapuram to kill AK and PK. Dawood's former right hand man Saleem (Sayaji Shinde), who's in jail and is in danger of being bumped off by Dawood, tells AK and PK to approach Chotta Rajan (Vennela Kishore) for help. How this whole story reaches its conclusion is a painful tale bloated by 5 unnecessary songs, 3 unwanted fights, and a whole lot of unfunny sequences.

The biggest mistake that AK Rao PK Rao makes is trying to be a message-oriented movie. And the message is conveyed by 2 persons who no one is likely to take seriously. Take this for example - Thagubothu Ramesh is preaching about the ills of drinking and getting liquor stores to shut down. Audiences in the theatre were laughing out loud at this scene - and several others like this. Using names like Dawood and Chotta Rajan, and showing them hunting each other in Amalapuram turns out to be extremely unfunny, too.

Dhanraj and Ramesh have their limitations, and it is extremely - and unintentionally - funny to see them dance in duets along with skimpily-clad heroines. Ramesh appears like he's doing a drunken dance to every song with his tongue stuck out. The heroines promptly appear when a song is needed, show some skin, and then disappear. The rest of the supporting cast go through the motions, uttering lines that they would like to forget very soon.

The technical values are non-existent. The songs have lyrics that translate to "when you come I'm happy, when you go I'm not and I wonder why". If you need us to tell you more, you should go see the film.

It is the sign of a super-dry summer for Tollywood that films like this are being released in almost all the multiplexes. The next big festival and the next big release associated with it can't come too soon.
Share. Save. Connect.
Tweet
AK RAO PK RAO SNAPSHOT 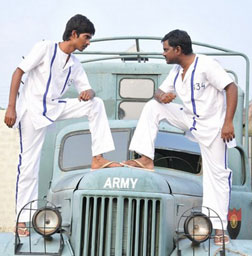