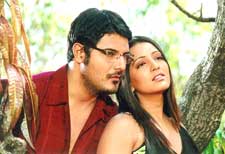 Priyanka Pulla / fullhyd.com
EDITOR RATING
1.0
Performances
Script
Music/Soundtrack
Visuals
NA
NA
NA
NA
Suggestions
Can watch again
NA
Good for kids
NA
Good for dates
NA
Wait to rent it
NA
Rain is a disaster made with almost anachronistically bad taste. It is vulgar, yes, but never was vulgarity so politically incorrect. It’s almost as if it was made before certain concepts of political correctness came into being. Never have issues like rape and blindness, for example, been so blatantly jostled out off their reserved seats of privilege, to give way to a stuttering, apologetic attempt at titillation.

That’s Rain for you. Repugnant, whether you are looking for emotional drama (as the previews indicate) or just the skin show (as the billboards shout out).

Of course, Rain is not about rain, or rape, or phobias or psychiatric techniques or any of the other issues that mingle together like a well-kneaded ball of churan in this movie. It is about the ample, ahem, adipose tissue that Meghna Naidu is endowed with. It is a tribute,a celebration of her…er… body fat distribution.

Meghna Naidu plays a blind victim of rape who is now a famous writer and has a journalist (Himanshu Malik) home to interview her. She has jarring hysterical outbursts that are as traumatic to the viewer as a prison scene of third-degree torture. At the slightest stimulus, she starts screaming and rolling on the floor so that her sari pallu falls down and we get to see that she has adequate… ah… reserves against starvation, let’s say.

So our journalist questions her, then threatens her when he finds out she has knives hidden all around the house, and finally starts making love to her after telling her that he is a psychiatrist who has come to heal her phobia for rain. That’s right. She has an unreasonable fear of rain because the night she was raped by a stranger, was a night of a heavy thunderstorm. So the journalist-turned-shrink cures her by forcing her to sit under a shower in the bathroom. And when she is cured, they become lovers.

A few shots of the plumpness of Naidu later, they start kissing and she discovers he is her rapist. What follows is a round of fighting and struggling so loud and gruesome, it works better than any stomach pump in pushing out the entire contents of your stomach. By this time you are sick, battered and bloody, unable to keep up with the constant wavering of the story. One minute they are trying to turn you on, and just when you begin to get it, it’s like they slap you in the face with some garish, lethal-voltage emotional drama. And just when you are engineering your response to that, out jumps the violence like a bucket of ice water on your face.

No idea what Amol Shetge was thinking when he made this movie, except that it is some form of revenge he sought to wreak against the audience for his previous flop Gunaah. And he gets it. If this movie doesn’t break you, well, go join the Marines. For the weak of heart, of course, this movie is a complete no no. If anything, recommend it to your worst enemies.

That’s what Rain serves best as, a weapon of torture. Use it effectively, and if you can’t, turn your back to it and run.
Share. Save. Connect.
Tweet
RAIN SNAPSHOT

ADVERTISEMENT
This page was tagged for
Meghna naidu rape scenes in rain
Rain hindi movie
Rain reviews
release date
Meghna Naidu, Himanshu Malik
Follow @fullhyderabad
Follow fullhyd.com on
About Hyderabad
The Hyderabad Community
Improve fullhyd.com
More
Our Other Local Guides
Our other sites
© Copyright 1999-2009 LRR Technologies (Hyderabad), Pvt Ltd. All rights reserved. fullhyd, fullhyderabad, Welcome To The Neighbourhood are trademarks of LRR Technologies (Hyderabad) Pvt Ltd. The textual, graphic, audio and audiovisual material in this site is protected by copyright law. You may not copy, distribute, or use this material except as necessary for your personal, non-commercial use. Any trademarks are the properties of their respective owners. More on Hyderabad, India. Jobs in Hyderabad.