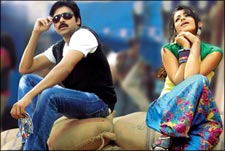 Deepa Garimella / fullhyd.com
EDITOR RATING
7.5
Performances
Script
Music/Soundtrack
Visuals
9.0
7.0
8.0
8.0
Suggestions
Can watch again
yes
Good for kids
No
Good for dates
yes
Wait for OTT
No
Teenmaar is a scene-to-scene replica of Love Aajkal (okay, maybe not scene-to-scene; Teenmaar has what we need for that celluloid adrenaline we're addicted to: 3 fights for the hero). It's a good thing, in many ways, to faithfully imitate a Bollywood hit - at the very least, you have a product that looks amazing.

And it helps if there's a soul. Preferably, one shaped by its star.

Love Aajkal is a tricky film to repackage and sell to a Telugu audience (it had a mixed reception in Hindi, in the first place), thanks to the fact that the new-age romance curve it deals with is something that not all are likely to be comfortable with. The good news is that Teenmaar, ill-suited name and all, works.

The better news is that the solid "romantic hero" - the one that men want to be, and that women want - is back.

Teenmaar's plot weaves together 2 love stories: one belonging to the times of yore, where love was slow, sure and tender; and one from generation Y, replete with haste, indecisiveness, and much heart-break. Pawan Kalyan stars as the protagonists of both stories, Arjun Palwai in the first, and Michael Velayudam in the second.

Michael is this incorrigible flirt who changes girlfriends more frequently than he changes his innerwear, and when he meets Meera (Trisha), there is instant chemistry (basically, the touchy-feely kinds). When Meera announces that she's moving to India, they break up, thanks to the commitment-phobic Michael who doesn't want the hassles of a long-distance relationship.

Running parallelly is a flashback narrated by Senapathy (Paresh Rawal), who tells the story of the feisty Arjun Palwai, a strong-willed man who went to great lengths to woo the woman he loved.

Happy endings are in store, but not before Michael goes through the complete "love graph" that one is supposed to when one finds "that one person" and "doesn't realize it".

That Pawan Kalyan - the star and the actor - is a smashing knockout is no exaggeration. He's impeccable as the virtuous and passionate Arjun Palwai, and as the boyish and reckless Michael as well. He's come a long way from his Khushi days, which, incidentally, are the days that his performance in Teenmaar reminds you a lot of.

Jayant Paranji has been quite scrupulous in retaining the original's approach to the story. This is largely a slice-of-life film driven more by its overtones of love and romance, and by its characters, rather than by dialogues or individual scenes. The prevailing mood, obviously, is that of warm, gentle, cockle-warming love.

The possible downside to this movie is that the hard-core urban-ness (the locales are mostly abroad) to its tone and characterization might not go down well with audiences who don't care. Also, a comedy track might have helped - instead, we have Ali in a miniscule role.

Meanwhile, while it's easy to know which story audiences will root for between the two (Arjun Palwai, who, every time he appears on screen, prompts admiration welling up inside of you), it's also scary to know that Arjun is not the character who is easier for fans to emulate. Indeed, the plot's one flaw is the unpardonable amount of time Michael takes to realize things - an amount of time that is not okay in reality - and there's a danger that people will want to be Michael more than Arjun.

Given that Imtiaz Ali's been credited with the story, and also given that there are fewer dialogues in the film than we're used to, Trivikram is not as big a part of Teenmaar as we'd expect. His work is visible though, and coupled with Pawan Kalyan's energy and personal style, the movie has several humorous sequences (not to forget the unmissable rousing speeches about love).

Chemistry matters immensely in a film like this, and Pawan Kalyan and Trisha share a lot of it. Trisha, of course, is brilliant, and lends the role the kind of grace that few actresses can. Kriti Kharbanda is well-cast as the demure Vasumathy of old times. However, Paresh Rawal could have had a bigger presence.

Manisarma's music (despite a couple of "inspired" pieces) is set to linger on, on charts and in your mind. Also, the look and feel of the movie is slick, and the entire cast has been done up stylishly.

Really, as a fan in the seat behind us wondered loudly and fervently, where the hell was Pawan Kalyan all these days?
Share. Save. Connect.
Tweet
TEEN MAAR SNAPSHOT

See Teen Maar full details
TOP COMMENT
Vyas on 14th Apr 2011, 4:54pm | Permalink
A decent movie i have been waiting for a long time, pawan is so energetic and simply rocking.


Pros: basic story of the movie, dialogues, and pawan performance and Thrisha's glamour
Cons: partly slow, second heroine
4
1
USER RATING
9.0
TEEN MAAR USER REVIEWS
1 - 11 OF 11 COMMENTS
POSITIVE  |  NEGATIVE |  NEWEST  |  OLDEST  |  MOST HELPFUL  |  LEAST HELPFUL
USER RATING
6.8
13 USERS
Performances
Script
Music/Soundtrack
Visuals
7.3
6.5
7.4
7.8
Can watch again - Yes
Good for kids - No
Good for dates - Yes
Wait for OTT - Yes
divyabolisetty on 18th May 2011, 2:29pm | Permalink
This movie was a torture where Pawan Kalyan's barely audible dialogues, his yuck-disgusting italian, horrible accent and the sleazy trash in the movie made me feel like throwing up. This movie icannot be compared with Love Aaj Kal ( which was decent and zillion times better). Trisha with her non-existent acting skills was pathetic. Pawan kalyan acting "cool" looks like a despo loser .So, if u been paid by the filmmaker to write this review, u owe the public an aplogy.
sreekiran on 11th May 2011, 9:49am | Permalink
nice breezy entertainer. some what ok in first half and last 30 minutes is good. songs are very good on screen. pawan kalyan dialogs are perfect in parts. narration in first half is life to the movie.

The users above/below may have provided low ratings because the script is against their love life or they don't thinking level is not upto the mark.

Anyways, The movie is great and it's so sad because it's a dubbed flick and it is not eligible for awards (afaik)


Pros: Music, Visuals, Script, Action, almost everything
Cons: Dialouge by Michael (modern pavan) are little faster.
RATING
10
V Ramesh on 24th Apr 2011, 9:04pm | Permalink
Note to Editor:
Anybody who rates Teen Maar movie as highly as this lady did should not be allowed to review/rate movies. The whole credibility/integrity of the individual and the website are shot to hell.


Pros: ?
Cons: life is too short to list them
RATING
1
vamsi on 22nd Apr 2011, 10:15am | Permalink
As everyone knows, Teenmaar is a copy of Love Aaj Kal. But I guess some things cannot be copied well... like the acting, the music, the genuineness, the very spirit of the movie itself. Teenmar feels like a fake all the way.


Pros: Visuals are OK
Cons: Everything else... even the dubbing by Pawan Kalyan
RATING
4
princesachin on 20th Apr 2011, 6:58pm | Permalink
A beautiful movie with energetic performances from the cast. Pawan was at his best while Trisha matched him perfectly. Great chemistry between them. Kriti was lovable too.


Pros: Pawan and his superb performance, Trisha was looking good and performed well too, music and great visuals
Cons: slow narration
kumar on 18th Apr 2011, 11:49pm | Permalink
love aajkal itself is a bakwas movie. Copying that film and making one is useless. Don't waste money on this copied bullshit.


Pros: pawankalyan, music
Cons: story
RATING
4
Santosh on 17th Apr 2011, 11:59pm | Permalink
Looks like this editor's is completely biased atleast for this movie, in every way this is a bakwaas movie (we can't compare the performance with Love Aaj Kal).


Pros: just hype
Cons: Pavan Kalyan's performance
Portuguese Man-of-War on 15th Apr 2011, 10:58am | Permalink
@Moviebuff: While it's fine to disagree with the editor's view or rating, saying the kind of things you did is not done, is it?
Moviebuff on 15th Apr 2011, 6:45am | Permalink
HAHAHA IT'S CONFIRMED THIS EDITOR IS SOLD OUT.. WHILE SHE'S THERE WRITING RUBBISH ABOUT MEANINGFUL CINEMA, SHE CAN'T STOP GOING ON AND ON ABOUT A BLIND COPY(SCENE TO SCENE)
Vyas on 14th Apr 2011, 4:54pm | Permalink
A decent movie i have been waiting for a long time, pawan is so energetic and simply rocking.

ADVERTISEMENT
This page was tagged for
is teenmar waste movie
THEENMAAR MOVIE REVIEW
Teen Maar telugu movie
Teen Maar reviews
release date
Follow @fullhyderabad
Follow fullhyd.com on
About Hyderabad
The Hyderabad Community
Improve fullhyd.com
More
Our Other Local Guides
Our other sites
© Copyright 1999-2009 LRR Technologies (Hyderabad), Pvt Ltd. All rights reserved. fullhyd, fullhyderabad, Welcome To The Neighbourhood are trademarks of LRR Technologies (Hyderabad) Pvt Ltd. The textual, graphic, audio and audiovisual material in this site is protected by copyright law. You may not copy, distribute, or use this material except as necessary for your personal, non-commercial use. Any trademarks are the properties of their respective owners. More on Hyderabad, India. Jobs in Hyderabad.