Bhaggmati - The Queen Of Fortunes Review 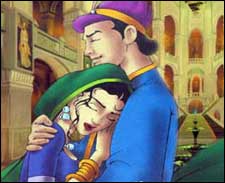 Ghazala Rizvi / fullhyd.com
EDITOR RATING
5.0
Performances
Script
Music/Soundtrack
Visuals
NA
NA
NA
NA
Suggestions
Can watch again
NA
Good for kids
NA
Good for dates
NA
Wait to rent it
NA
A 35 crore budget for showing off to the world the two things that we Indians uniquely possess – heritage and technical expertise – is money well spent. Bhagmati, the first Indian film crossing the live-animation barrier, took 3 years to present the above ingredients in balanced proportion. Though the animation will not beat Walt Disney’s – not yet – the story will. Because Bhagmati is, more than about technology and filmmaking, about the genesis of a great city.

Sriranjini (Tabu) is a university topper, and nurses an ambition to research the age-old love story of King Mohammad Quli Qutub Shah and Bhagmati. She also cherishes a dream to work with Dr. Pratap (Ashok Kaul), an idiosyncratic historian, as her guide. Obscure to us but well-entrenched in her eyes, are the reasons that she wants to do it all. Asim (Milind Soman) is the member of the Quli Qutub Shah Foundation. While piloting planes is his religion, Asim is not fond of love or destiny. Meeting Sriranjini, he converts to both.

The eccentric professor takes Sriranjini under his wing, leading her into the lore of the shahi palaces. Sriranjini becomes Bhagmati, with only intermittent returns to the present. Thus unfolds the story of the famous unbound love, between a king and a commoner. The Golconda Fort plays the backdrop both in its present day bare ruggedness and its scintillating glorious past.

Delving into the past, for Sriranjini, the past present-barriers simply melt away, as do the fort’s walls, leading her into an entirely different world from hers. Precisely, one of a Zee Institute Of Creative Arts (ZICA) animated beauteous Bhagmati, and her prince, Qutub.

A textbook narration follows the carefully interwoven past, with the genesis of the Quli dynasty, and the unrequited love that laid the base for Charminar and the new city. Mohd. Quli Qutub Shah (voiced by Ravindra Jain) is the adventurous, young prince of the Shahi dynasty. A chance meeting with Bhagmati (voiced by Mahima Choudhary) during one of his hunting expeditions, transforms the young prince into an amorous lover.

Overcoming humongous travails, King Qutub marries his sweetheart, and settles down to a life of service to his people. The great city of Hyderabad gets its foundation by the wishes of the Queen Bhagmati. However, unlike all great stories, this one ends on a sad note, with Bhagmati giving up her life while nursing the common people who are hit by a malicious fever.

Interspersed with myth, truth and improvisations, Bhagmati, nevertheless, is redolent with the flavors of Hyderabad. It tells the story of a great ruler, a queen who gave her life for her people, and a city which symbolizes the human values of equality, humanity and friendship.

The way an attempt is made in trying to blend the animated with the real, the past with the present, is highly reflective of the essence of Hyderabad, and the multi-ethnicity of the city. A place where the old co-exists with the new, where traditions get jealously preserved while paving the way for high-tech endeavors, and where people are proud, irrespective of their backgrounds.

The movie also has a surprise song sequence by Hema Malini, who, like the lore, is everlasting and fresh. With Tabu and Milind adding the glamor factor, and some soulful numbers by Asha Bhonsle and Sadhana Sargam, Bhagmati hopes to do considerably well at the BO. But, inspite of a good story, or because of zilch direction, Tabu is unable to draw in the audience. Milind, appears detached, with little intrest even in his present act.

Almost touching are the animated Bhagmati’s cries of love and Prince Qutub’s emotional eyes. With all the rigor of a masala movie, this love story too unfolds palace intrigue, action-packed fighting sequences, and, of course, the undying love of the couple. Again, the animation too, is in its rudimentary form, and only watchable as a hearalder of better times to come.

During the first half, the movements to the past, which are all in animated form, and the shift to the present with Tabu doing the dig, are often confusing, and not seamlessly done. A fault at best attributed to the lack of any sense of direction by Ashok Kaul. The second half, where the animation takes the front seat, is interesting, if a bit too long. Even upon being the first fully indigenously animated movie, Bhagmati’s characters emoted almost better than the live ones.

It cannot be said that the Indian cinema has finally grown big enough to make blockbusters of films made with diverse perspectives. Only, with this, you just might feel relieved that that you are born in the right city.
Share. Save. Connect.
Tweet
BHAGGMATI - THE QUEEN... SNAPSHOT
BHAGGMATI - THE QUEEN OF FORTUNES SNAPSHOT

ADVERTISEMENT
This page was tagged for
Bhaggmati - The Queen Of Fortunes hindi movie
Bhaggmati - The Queen Of Fortunes reviews
release date
Tabu, Milind Soman
theatres list
Follow @fullhyderabad
Follow fullhyd.com on
About Hyderabad
The Hyderabad Community
Improve fullhyd.com
More
Our Other Local Guides
Our other sites
© Copyright 1999-2009 LRR Technologies (Hyderabad), Pvt Ltd. All rights reserved. fullhyd, fullhyderabad, Welcome To The Neighbourhood are trademarks of LRR Technologies (Hyderabad) Pvt Ltd. The textual, graphic, audio and audiovisual material in this site is protected by copyright law. You may not copy, distribute, or use this material except as necessary for your personal, non-commercial use. Any trademarks are the properties of their respective owners. More on Hyderabad, India. Jobs in Hyderabad.