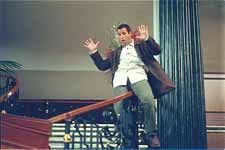 Mr. Deeds is a remake of Frank Capra's "Mr. Deeds Goes To Town", that great Depression-era comedy that immortalized the small-guy psyche of America. The 1936 movie was nominated for Academy Award for Best Picture, and lost out to another classic, The Great Ziegfeld. Likewise, The Great Ziegfeld has a better chance of winning the 2003 Oscar race than this Sandler imitation.

Now most of Hyderabad doesn't know Sandler from Adam (hahahahohoho, and compared to some stuff you find in the movie, that one could've been from Mark Twain), and things are going to remain that way. So to give you an idea, suppose Swati Mutyam was remade with Uday Kiran playing Kamal Hasan's role. And suppose they made it to be a comedy. There.

The plot? Okay, don't try this at home, but when media baron Blake (Harve Presnell) dies, he leaves $40 billion in stock to small-town pizzeria owner Longfellow Deeds (Adam Sandler) that's also the controlling stake in the empire he's built. Normally they should all have lived happily ever after, but Chuck Cedar (Peter Gallagher), Blake's crooked second-in-command, has other plans that mostly involve a signature by Deeds on a stamped paper.

For this purpose, he gets the halftime-poet, halftime-pizza-delivery-man and fulltime-non-actor Deeds to New York from native Mandrake Falls. Here he proceeds about infusing his small-town homey values into the spoilt rich of New York city that he runs into, with a gusto that only Adam Sandler can manage, with the possible exception of a cucumber.

Anyway, among the people reformed by Deeds is also Babe (Winona Ryder), a slimy reporter for a rival network that wants to do the insider on the new billionaire of New York, who befriends Deeds to get the scoops, but is thrown into contrition by his guileless persona. And the film ends with good triumphing over evil, namely in it ending.

So? Well, the film will appeal to all Sandler's fans, since by definition anything appeals to them. Indeed, his mega-star status is a reflection of how the current crop of America, exposed mostly to bonehead muscle-bound action heroes, is more accommodative than it has ever been in its standards. He does what he's best at - stay placid and duh for the most part, and jump into animated convulsions intermittently. His fans live for those flashes of perceived comedy, spending the rest of the movie waiting for them. Okay, so the film lacks the grossness his flicks are normally made of, but well, these things happen. 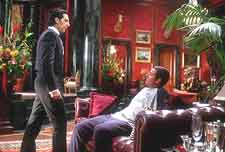 The support cast is quite talented, and is the saving grace. The beleaguered Winona Ryder does fine though it's tough to match up to Jean Arthur, but the show-stealer is undoubtedly John Turturro, who plays a stealthy but good-natured butler. On the whole, this is a film that should've never been remade in the first place, and hopefully Sandler will never get inspired by that other Oscar winner, Gandhi.
Share. Save. Connect.
Tweet
MR. DEEDS SNAPSHOT
See Mr. Deeds full details
MR. DEEDS USER REVIEWS
1 - 2 OF 2 COMMENTS
POSITIVE  |  NEGATIVE |  NEWEST  |  OLDEST  |  MOST HELPFUL  |  LEAST HELPFUL
USER RATING
6.4
5 USERS
Performances
Script
Music/Soundtrack
Visuals
NA
NA
NA
NA
Can watch again - NA
Good for kids - NA
Good for dates - NA
Wait for OTT - NA
Resident Evil on 18th Sep 2002, 10:53am | Permalink
Hee Hee! This is funny!
The FullHyd Review, I mean.....
The movie??? If you think (1)driving a poker into a frostbitten foot is funny
(2) If you think you can listen to brain-deranged "pomes" without puking..
(3) If you like seeing Tennis balls hitting various parts of a body at high velocity is a laugh riot.
(4) If you find that Adam Sandler's speech at the end of the movie gives you goosepimples, (it's so INSPIRING!)
(5) You like the idea that a man who likes hearing echoes and sliding down bannisters can bag a girl like Winona Ryder...

CONGRATS!!! You have just watched a Modern Classic, a triumphant celebration of American Small-town values....

ME? I think Mr Deeds should be given a one way ticket to Antarctica where he can frost-bite the rest of his body ( minus his brain, he doesnt have one!) and rest in peace.

ADVERTISEMENT
This page was tagged for
Mr. Deeds english movie
Mr. Deeds reviews
release date
Adam Sandler, Winona Ryder
theatres list
Follow @fullhyderabad
Follow fullhyd.com on
About Hyderabad
The Hyderabad Community
Improve fullhyd.com
More
Our Other Local Guides
Our other sites
© Copyright 1999-2009 LRR Technologies (Hyderabad), Pvt Ltd. All rights reserved. fullhyd, fullhyderabad, Welcome To The Neighbourhood are trademarks of LRR Technologies (Hyderabad) Pvt Ltd. The textual, graphic, audio and audiovisual material in this site is protected by copyright law. You may not copy, distribute, or use this material except as necessary for your personal, non-commercial use. Any trademarks are the properties of their respective owners. More on Hyderabad, India. Jobs in Hyderabad.