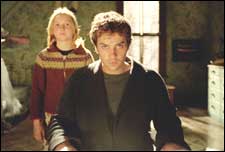 Ghazala Rizvi / fullhyd.com
EDITOR RATING
1.0
Performances
Script
Music/Soundtrack
Visuals
NA
NA
NA
NA
Suggestions
Can watch again
NA
Good for kids
NA
Good for dates
NA
Wait to rent it
NA
Welcome to the fabulously dull, dark-creatures lounge of the Boogeyman set, where all the greats and near-greats of horror just couldn't gather. You can relax, light up a cigarette, puff a joint, down a drink, whatever. All you really can't do is get scared.

Take care not to miss the beginning, since it dispels any illusions that this film is going to rock you. This flick wouldn't scare a 7-year-old. Set in Pennsylvania, Boogeyman is the story of Tim (Barry Watson). No, he is not the Boogeyman, he is the one afflicted by the dark cupboards of his own house, the dark corners in his own home, the darkness underneath his own bed, and, generally, the unfairness of anything that happens to be dark.

Now, Stephen King, who wrote the original novel, has for sure always maintained that he is terribly lily-livered on darkness, petrified of someone grabbing his hand from under the bed. Expecting us to share the same fears, Stephen Kay overpowers us with absolute darkness, running into hours, with Tim wavering in and out of focus most of the time.

Luckily realizing that he can't carry anything else, including himself as an actor, the makers make Barry Watson carry some gory-cum-emotional baggage. When Tim is eight, something devastating happens. Not to him, but to us. The absolute blackness of child-Tim's bedroom is captured by a shivering camera. We strive to make just anything out of this wavering mess, and find that Boogeyman has already engulfed his dad, in a cameo act.

It is doubtful that Tim was unhappy to be rid of someone who put him to bed with grisly stories teetering on the brink of horror, as his father did. Ask a psychiatrist, and you'll learn that it was some suppressed intense feeling of relief, which surfaced as his fear. Consoling girlfriend Jessica (Tory Mussett), too, could do no more than seduce him once in a while.

Tim couldn't have been expected to keep on trying to scare us with his monosyllabic dumb act and unnecessarily long dark walks, so his mother dies in time for him to return to their old, looming and rundown Victorian Gothic house. To hastily complete the ingredients of a horror flick, Franny (Skye McCole Bartusiak) joins Tim on site, to act as an another spooked one.

What follows is hardly easy to keep track of, as the dense atmosphere created prevents you from realizing what's actually happening. You get enough of creaking-door sounds, creepy spiders-crawling-your-back pauses, and a lot of bluish darkness to stare at. But that's about all that you get. Kay certainly solves the problem of spending millions on make-up and costumes - by eliminating all need for it.

By this time you must be realizing that you missed the story and even the gist of it, as also that other movie you could have watched instead. If you take scaring yourself seriously, keep away from Boogeyman.
Share. Save. Connect.
Tweet
BOOGEYMAN SNAPSHOT

ADVERTISEMENT
This page was tagged for
Boogeyman english movie
Boogeyman reviews
release date
Barry Watson, Tory Mussett
theatres list
Follow @fullhyderabad
Follow fullhyd.com on
About Hyderabad
The Hyderabad Community
Improve fullhyd.com
More
Our Other Local Guides
Our other sites
© Copyright 1999-2009 LRR Technologies (Hyderabad), Pvt Ltd. All rights reserved. fullhyd, fullhyderabad, Welcome To The Neighbourhood are trademarks of LRR Technologies (Hyderabad) Pvt Ltd. The textual, graphic, audio and audiovisual material in this site is protected by copyright law. You may not copy, distribute, or use this material except as necessary for your personal, non-commercial use. Any trademarks are the properties of their respective owners. More on Hyderabad, India. Jobs in Hyderabad.