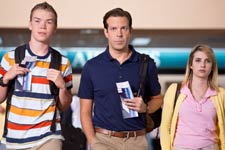 Nupur Barua / fullhyd.com
EDITOR RATING
5.0
Performances
Script
Music/Soundtrack
Visuals
6.0
4.0
5.0
6.0
Suggestions
Can watch again
No
Good for kids
No
Good for dates
Yes
Wait to rent it
Yes
When a Hollywood comedy boasts of Jennifer Aniston and Jason Sudeikis in the lead roles, you can bet that it will contain enough irreverence to make you chuckle. After all, these two actors have done their share of films that take concentrate on cheekiness and mockery. We're The Millers does not disappoint in that particular department, but it a tame attempt to portray an unconventional American "family" that is brought together due to various circumstances.

David (Jason Sudeikis) is a drug dealer. He is single and content in his not-so-elite apartment. He is popular with his clients, and when he chances upon an old college-mate who now has a "daddy belly", he pities the latter. Not for him the trials and tribulations of raising a family.

David is a nice guy, but self-absorbed. When his dorky young neighbour, Kenny (Will Poulter), rushes out of the building to save Casey (Emma Roberts), who is being harassed by street goons, David reluctantly has to step in. Eventually, the hooligans rob David's apartment of all his stash. This lands David in trouble with his boss and ex-classmate, Brad Gurdlinger (Ed Helms), a man whose den is a tribute to Shakaal of Shaan fame.

Brad offers David a chance to redeem himself. All David has to do is go to Mexico and pick up some drugs. This new thrust into the world of drug smuggling, as opposed to dealing, throws David into a quandary, but he has an idea.

Justifying to himself that the all-American family never looks suspicious, he convinces Kenny and Casey to pose as his kids, and Rose the Stripper (Jennifer Aniston) to be his wife.

The fun begins when all four of them pose as the Millers and try to adjust with each other. Rose seems to be the sanest of the lot, in many ways, but she has issues. The screenplay, which begins with David, then meanders into the psychology of each character, and makes a mess out of them. Sticking to one point of view - David's - would have made for a tighter story.

The movie is mercifully free of saccharine realisations of love and relationships - in fact, it takes another American family and mocks their values and interpersonal relationships. The characters otherwise have no graph, and they yo-yo between sudden bursts of empathy and lengthy discourses on how they do not give a damn.

The only consistent character is the virginal Kenny. The journey back to Denver from Mexico drags on for a while, and there are a few sparkling moments of humour there, but it gets tedious. Meanwhile, cursing and swearing are normal in the world of the Millers - and the dialogues are apt for the genre.

Jason Sudeikis and Jennifer Aniston both look tired, almost as if they are no longer interested in plots that deal with unconventional humour. They have a few scenes here and there that shine, but otherwise they sleepwalk through their parts. They do not even attempt to fire up their chemistry.

Will Poulter and Emma Roberts are promising, but the latter comes across as too unlikeable to be given a second chance at life. Ed Helms is wasted in the movie, and he does not make too much of an effort to cash in on his talent as a comedian.

The production design is average. At no point is the background looming in the scene. Even the recreational vehicles and campsites look like they have been put together in laziness, much like the script of the movie.

Cinematography is decent. The movie could have cut short by about 20 minutes, to make the whole adventure more exciting and believable.

We're The Millers is missable, and this weekend, with so many other movies releasing, that should not be a problem. Go only if you are a fan of the lead actors, and if you have not had your share of American comedies that involve inept henchmen and un-intimidating drug dons. Watch instead a DVD of The Whole Nine Yards, just to appreciate how Americans make fun of crime and criminals.
Share. Save. Connect.
Tweet
WE'RE THE MILLERS SNAPSHOT 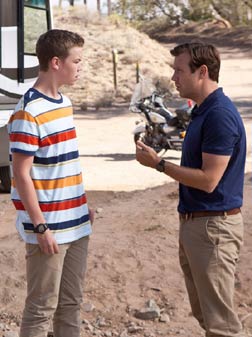 ADVERTISEMENT
This page was tagged for
We're The Millers english movie
We're The Millers reviews
release date
Jennifer Aniston, Jason Sudeikis
theatres list
Follow @fullhyderabad
Follow fullhyd.com on
About Hyderabad
The Hyderabad Community
Improve fullhyd.com
More
Our Other Local Guides
Our other sites
© Copyright 1999-2009 LRR Technologies (Hyderabad), Pvt Ltd. All rights reserved. fullhyd, fullhyderabad, Welcome To The Neighbourhood are trademarks of LRR Technologies (Hyderabad) Pvt Ltd. The textual, graphic, audio and audiovisual material in this site is protected by copyright law. You may not copy, distribute, or use this material except as necessary for your personal, non-commercial use. Any trademarks are the properties of their respective owners. More on Hyderabad, India. Jobs in Hyderabad.