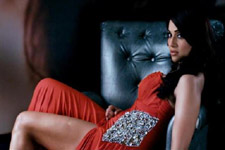 Kritika Deval / fullhyd.com
EDITOR RATING
5.0
Performances
Script
Music/Soundtrack
Visuals
9.0
2.0
4.0
6.5
Suggestions
Can watch again
No
Good for kids
No
Good for dates
Yes
Wait for OTT
Yes
There are two questions that need to be gotten out of the way before we can commence with this review.

While we have several more of these "what is it with the Bhatts" queries, they'll have to take up their very own article, for which we currently have neither the time, nor the inclination.

As far as Raaz 3 is concerned, we've all been titillated by the clever promos and enticed by the one or two songs that are making rounds. The interviews, the ads, the media coverage, the cleavage - whoever accused the Bhatt camp of stinting on publicity? Then there is the fact that a horror flick with two really gorgeous women, and the "serial kisser" in it, must interest people. The movie even boasts of some really good performances by nearly its entire cast, main as well as supporting.

While the film has all these rabbits firmly in hand, the most important ones - namely "IQ" (nay, "commonsense"), "decent screenplay", and "chemistry amongst the leads" are pretty much left behind in the bush. So what do we have here? A tediously predictable formula that's been tweaked a bit here and there to give out an apparently new result.

Raaz 3 has been touted as the story of a declining star who sells her soul to the evil side in order to hold on to her success. And that is kind of what it is. What nobody except the viewer seems to get is that the star in question, Shanaya (Bipasha Basu), is crazy as all of Bedlam put together - and has been so right from the beginning. There is no decline. Just plain 'ol kookoo-ness from start to finish.

You see Shanaya going to a temple and asking the pandit what she should do to make sure she wins an award for the best actress the next day. The pandit assures her that her stars are perfectly lined up, and that the award is practically already in her possession. From that moment till the end of the movie you can predict everything that happens, except for the parts that are so dumb as to be beyond comprehension.

Actually, the award instead goes to PYT Sanjana (Esha Gupta). Shanaya is incensed, vows to destroy Sanjana, and finds herself with an eeeevuul spirit, one with worms crawling all over him as proof of his sinisterness (henceforth he shall be referred to as Wormy). Wormy gives Shanaya water that has been "blessed" by some other evil spirit - something that needs to be drunk by Sanjana everyday.

Shanaya picks her "consort" and talented director Aditya (Emraan Hashmi) to do the job. He does it under an inexplicable mixture of obligation, coercion and a rather awkward seduction, while not even taking into consideration that the woman just might be in urgent need of therapy. That's when all the gory fun starts, with ghosts going peekaboo, Sanjana getting nightmares, and Shanaya going around looking like the psychopath she is.

Soon Aditya finds himself falling for Sanjana, and that's when people start dying gory deaths. Of course, all our hero cares about is that Shanaya is troubling his precious girl du jour. Soon, the usual séances and the astral interactions begin, more people die, the couple fights cynicism from, well, cynics - nothing we haven't seen in just about every ghostie-ghoulie flick made, except for a few goose-bump-inducing moments here and there. Then follows the expected "great betrayal", followed by the heroine falling into "great distress" with the hero engaging in a "great battle"... well, you get the drift.

The few things that make the movie watchable are the performances as the movie progresses, and a couple of truly unnerving moments. But that is only if that's what your tastes lean to - for example, a scene in which a nightmare-crazed Sanjana stands naked on a table at a party and screams her guts out at things no one else can see.

The Emraan-Bips and Emraan-Esha make-out sessions are rather uncomfortable to watch - not because they're too sexual in nature, but because of how forced they seem. Add to that the ridiculous dialogues, and you are left chortling at nearly everything that comes out of their mouths. However, Bipasha puts on a pretty good show, even with the limitations of her role. Emraan's acting skills are something you see shining through once every while. It is Esha, however, who manages to impress you with how not over-the-top she manages to make her character.

As far as the visuals are concerned, they are pretty impressive in their mostly realistic bizarreness. The much-hyped scene involving cockroaches succeeds in grossing you out, because it has been made quite well.

Although the soundtrack is more or less factory-outlet based, we all know about the numbers that are hitting the charts currently, mostly for the lack of better musical fare.

You might want to skip Raaz 3 if you're looking for a horror flick that will actually scare you. You'd be better off watching The Shining or Saw or Omen or even Alfred Hitchcock's The Birds, to get enough chills to last you a few lifetimes.
Share. Save. Connect.
Tweet
RAAZ 3 SNAPSHOT 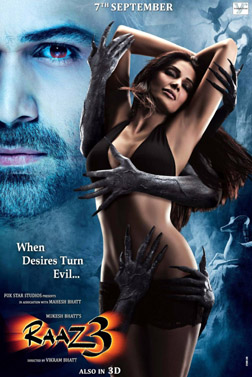 ADVERTISEMENT
This page was tagged for
Raaz 3 hindi movie
Raaz 3 reviews
release date
Emraan Hashmi, Esha Gupta
theatres list
Follow @fullhyderabad
Follow fullhyd.com on
About Hyderabad
The Hyderabad Community
Improve fullhyd.com
More
Our Other Local Guides
Our other sites
© Copyright 1999-2009 LRR Technologies (Hyderabad), Pvt Ltd. All rights reserved. fullhyd, fullhyderabad, Welcome To The Neighbourhood are trademarks of LRR Technologies (Hyderabad) Pvt Ltd. The textual, graphic, audio and audiovisual material in this site is protected by copyright law. You may not copy, distribute, or use this material except as necessary for your personal, non-commercial use. Any trademarks are the properties of their respective owners. More on Hyderabad, India. Jobs in Hyderabad.