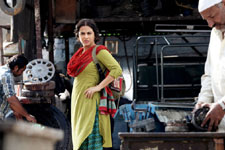 Nupur Barua / fullhyd.com
EDITOR RATING
5.0
Performances
Script
Music/Soundtrack
Visuals
7.0
5.0
5.0
8.0
Suggestions
Can watch again
Yes
Good for kids
No
Good for dates
Yes
Wait for OTT
No
In the recent past of Bollywood history, two sub-genres have become popular enough for filmmakers to experiment with them more than once - one is the women-centric movie (think Queen, Kahaani, etc), and the other is the mystery thriller (think Samrat & Co. etc). Producers Dia Mirza and Sahil Sangha go one step further when they take Vidya Balan (who is responsible for the success of the first genre, in some way) and put her in a movie that requires her to play a detective.

The last time Vidya Balan tried a comedy (Ghanchakkar), it sank without a trace. She is best known for her portrayal of rather intense characters (as in The Dirty Picture and Kahaani). Trailers may lead you to believe that Bobby Jasoos is a comedy, and your first instinct may be to avoid it altogether, but we can tell you that the story is not all slapstick and goofy acts. It has underlying themes and can almost be a parody of life in modern India.

So there is Bilquis (Vidya Balan), who likes being called Bobby. She does not question the patriarchy that her father imposes on her household, but she is certain that she wants to be a detective - or rather, a private investigator. The facts that she has no experience and absolutely no qualifications do not deter her. After numerous rejections by various organisations, she becomes even more determined to fulfil her sleuthing ambitions.

So she sets up her own organisation, and names it Bobby Jasoos. Her part-time staff comprises one computer hardware repair person named Shetty (Prasad Barve) and a tea-stall worker named Munna (Aakash Dahiya). They are her friends, and a source of constant encouragement - leading to many humourous interactions. However, there is a paucity of serious drama in the cases that Bobby is saddled with, and she wonders if her father was right after all when he said that this was not a respectable profession.

Of course, a young woman of 30 or so cannot be expected not to have a few distractions, and Bobby is no exception. When Tassavur (Ali Fazal), a successful crime show anchor, asks her to help out with his parents, she ends up falling in love with him. He does not have an opinion on her chosen line of work, because he is a brooding young man, but Bobby remembers, through all the love and romance, that she is slowly heading towards bankruptcy.

Enter Anees Khan (Kiran Kumar), the enigmatic Pathan who offers Bobby her first interesting case. She jumps at the opportunity, and the money, and soon Khan has a series of mysteries for her to solve. Intrigued, Bobby finally takes a step back to figure out what the man is all about, and that is when the drama unfolds.

The beginning of the movie - in fact, the first half hour - is perfect, almost. The director sets up the distinctive area of Mogulpura in Hyderabad. And Mogulpura is almost the lead protagonist of Bobby Jassos, since it gives birth to the likes of Bilquis and her family. It is here that Bobby grew up and began to dream, and it is here that Tassavur feels suffocated. Bobby's father has lived all his life in this area and that has made him the man he is. Mogulpura is a melting pot of characters, and offers a variety in culture and outlook.

After the first half hour or so, however, the story concentrates too much on the differences between father and daughter. What begins as a promising balance of fun and drama begins to lean towards the slightly morose. Unfortunately, this balance is never regained, and the screenplay becomes uncontrollable after this, as far as structure is concerned. Things begin to get over the top (and not in a funny way), and the logic in the story begins to disappear.

By the time the film is over, you are left with a sense of relief, and disappointment, since the beginning held so much promise. You try to make sense of the climax, and if you are a mystery movie buff, you will notice that the script does not follow the rules of detective-story writing. It is not that the writing is flawed, really - it is just that it includes too many elements (humour, suspense, romance, philosophy, social commentary, grief, struggle, and others), in flawed proportions.

The film does have certain bright sparks - and the primary joy is Vidya Balan and her command over the language (Hyderabadi Hindi, in this case). She is confident, and her ability to masquerade as various characters, both male and female, is commendable. She fills the screen with her presence, and makes it difficult for you to concentrate on anything, or anybody, else.

Ali Fazal, however, makes a mark, despite his co-star. He is perfect for the role. Arjan Bajwa slips in and out of the picture, and cannot be ignored. Rajendra Gupta as the father, Supriya Pathak as the mother and Tanvi Azmi as the aunt are delightful, but not very impressive. Zarina Wahab is largely wasted. And Prasad Barve and Aakash Dahiya are funny in parts.

What is right about the movie is the production design. From the dingy offices to the colourful alleys, Hyderabad comes alive in the story. The cinematographer has captured the area with much love, as is apparent in the superior visuals. The editing is effective for a movie that is two hours in length. The music, however, is below average.

A special mention has to be made of the costume design. The stylist has stuck safely to the conventional "deglamourised" look for the characters, complete with the perfect curl and hairdo, and the unwrinkled clothes, of course, but it is the innovation in disguises that you will be surprised by. Each and every disguise has been carefully researched and executed, and Vidya Balan's promotional appearances before the movie may have prepared you for that. It is still impressive in the movie, even more so when you see the protagonist fitting into the skin of the characters she is playing.

Bobby Jasoos is not a perfect movie. In fact, there are more flaws there than perfections. However, it may be the best distraction this weekend, and mostly because of Vidya Balan. Try it once - you may just have fun.
Share. Save. Connect.
Tweet
BOBBY JASOOS SNAPSHOT 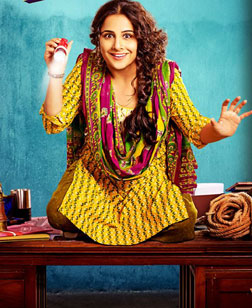 ADVERTISEMENT
This page was tagged for
bobby jasoos does the father have 2 wives
Bobby Jasoos hindi movie
Bobby Jasoos reviews
release date
Vidya Balan, Ali Fazal
Follow @fullhyderabad
Follow fullhyd.com on
About Hyderabad
The Hyderabad Community
Improve fullhyd.com
More
Our Other Local Guides
Our other sites
© Copyright 1999-2009 LRR Technologies (Hyderabad), Pvt Ltd. All rights reserved. fullhyd, fullhyderabad, Welcome To The Neighbourhood are trademarks of LRR Technologies (Hyderabad) Pvt Ltd. The textual, graphic, audio and audiovisual material in this site is protected by copyright law. You may not copy, distribute, or use this material except as necessary for your personal, non-commercial use. Any trademarks are the properties of their respective owners. More on Hyderabad, India. Jobs in Hyderabad.