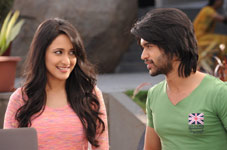 Ravi Kandala / fullhyd.com
EDITOR RATING
2.0
Performances
Script
Music/Soundtrack
Visuals
2.0
2.0
2.0
2.0
Suggestions
Can watch again
No
Good for kids
No
Good for dates
No
Wait for OTT
No
Those who ranted about the sexism in Baahubali or in Telugu movies in general need to watch Mirchilanti Kurradu. The film has Shakalaka Shankar playing a character named Avataram (from Anakapalli). Avataram comes to the city, "tries" through Facebook, and is lucky to have a girl "fall" for him. He then takes her to movies and malls and all the usual hangouts and ends up with a huge debt. When his debts spin out of control, he meets the girl in a park, abuses her, drags her around by her hair and beats her up with a belt - all this, while hundreds of people are watching.

This leads to him being arrested. When his friends, Sidhu (Abhijeet) and others, go to the girls hostel where his girlfriend stays to ask her to withdraw the case, they end up fighting with the girls - an all-out thrashfest between the boys and girls, again in the middle of the road. This leads to the boys boycotting the girls and the girls rejecting the boys. Among these girls is Vasu (Pragnya Jaiswal aka fair North-Indian girl with no idea of what she's doing in this movie) who Sidhu is deeply in love with.

This whole set-up takes up the first half. The hero and heroine reconcile over a series of silly sorries uttered by the hero around an hour into the second half, and you think the movie has ended. At this point, there is a twist in the plot with the heroine saying she's slated to be married in four days to someone else, but she wants Sidhu to come convince her dad and get married with his consent (damn DDLJ). And Sidhu lands up at her house on the day of her wedding with absolutely no plan, and in a matter of 10 minutes manages to convince everyone that he's the best choice for Vasu. Thankfully, the movie actually ends this time.

Add to this story a meaningless sub-plot about the place where the boys stay - it is called Nanna Hostel and is run by Nanna (Rao Ramesh) who is some kind of champion for youth. Add a couple of fights where pitta-sized Abhijeet beats up bull-sized Supreet (Katraj from Chatrapathi). Add 3-4 completely useless songs picturised largely in a room with flash lights. And add a completely meaningless comic cameo by Saptagiri which runs for over 20 minutes. And you finally have several thoroughly disgusted viewers - including yours truly.

Abhijeet needs a haircut. For all practical purposes, he looks like the Jumanji character from Thammudu, the guy whose face is so hidden by layers and layers of hair that you have to search for it. There's a scene in which he's hit by pepper spray - when he's washing it off, you struggle to understand if it's his hair hurting him or the spray. Pragnya Jaiswal makes faces at the camera and chews gum to utter dialogues. The comedians attempt to give the movie some life but when you are given dialogues like "Google ki Youtube ki puttina cross-breed raa nuvvu", even the best of deliveries do not do it.

The film comes from the makers of Lion. They clearly went bankrupt producing that one - there are a couple of scenes where they're supposed to show someone in the USA talking on a phone, and the guy is standing in front of a poster of the Statue of Liberty with a plane flying overhead. The production values are terrible, the music is forgettable and the things the movie teaches are unforgivable.

Mirchilanti Kurradu was apparently supposed to release with Lion, but was stuck in the cans for a long time. We wish it had stayed there.
Share. Save. Connect.
Tweet
MIRCHILAANTI KURRADU SNAPSHOT 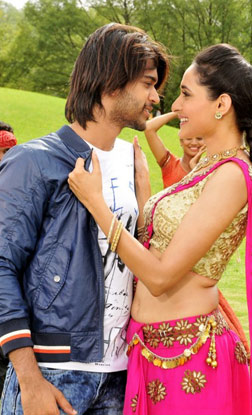 ADVERTISEMENT
This page was tagged for
Mirchilaanti Kurradu telugu movie
Mirchilaanti Kurradu reviews
release date
Abhijeet, Pragnya Jaiswal
theatres list
Follow @fullhyderabad
Follow fullhyd.com on
About Hyderabad
The Hyderabad Community
Improve fullhyd.com
More
Our Other Local Guides
Our other sites
© Copyright 1999-2009 LRR Technologies (Hyderabad), Pvt Ltd. All rights reserved. fullhyd, fullhyderabad, Welcome To The Neighbourhood are trademarks of LRR Technologies (Hyderabad) Pvt Ltd. The textual, graphic, audio and audiovisual material in this site is protected by copyright law. You may not copy, distribute, or use this material except as necessary for your personal, non-commercial use. Any trademarks are the properties of their respective owners. More on Hyderabad, India. Jobs in Hyderabad.