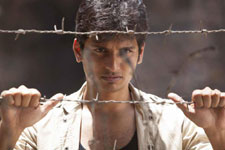 Ajay Kumar R / fullhyd.com
EDITOR RATING
5.0
Performances
Script
Music/Soundtrack
Visuals
5.0
5.0
5.0
6.0
Suggestions
Can watch again
No
Good for kids
No
Good for dates
No
Wait to rent it
Yes
A movie on the inhumane treatment being meted out to a few Indians travelling to the Gulf nations through unscrupulous agencies, has the capability to hit the right notes with its audiences, but it ought to dwell deeper on the sufferings using the elements necessary to create an impact on the viewer. But this isn't the case with Ravi K Chandran's Rangam 2, a film about one such immigrant who gets stranded offshore in Central Asia, and gets entangled in a situation that can potentially get him killed.

Flamboyant and carefree Chandru (Jiiva) meets a headstrong Srila (Thulasi) during a terrorist attack in Mumbai. During the attack - shot matrix-style - he watches a dreaded terrorist named Malik (Nawab Shah) getting shot by the cops.

Chandru and Srila fall in love in a spate of annoying and unnecessary songs (Harris Jayaraj's music makes it even worse). But things do not work out as Chandru is an orphan, and is unemployed and lives on his aunt's income despite being an MBA. Srila's father (Nasser) rejects Chandru's marriage proposal to Srila due to this.

Unable to face the insult, Chandru starts hunting for jobs. Quite unexpectedly, a suspiciously polite immigration agent (Bose Venkat) offers him a job in Basilistan (a fictitious region), a small country somewhere near Turkmenistan, and Chandru accepts it without a second thought.

So, Chandru, along with an autistic boy, another of the agent's customers, travels to Basilistan. But in a mysterious turn of events, the duo get caught with cartloads of narcotic drugs stuffed in Chandru's luggage. This almost immediately puts him on death row (executed in the province by decapitation in public view). He is thrown into a grotesque prison, resembling TV series Prison Break's lawless torture cell Sona (at least, Manush Nandan's visual rendering gives it a similar appeal for most parts), somewhere in the middle of the desert.

Chandru's only hope now is Srila, who happens to have an uncle (an Assistant Commissioner of Police in Mumbai) with contacts in the Ministry of External Affairs. Srila travels to the Central Asian nation, and her Ministry-appointed lawyer fights the case and successfully stalls the sentence for a month. But things go wrong when someone Chandru knows from the past quite unexpectedly catches up with him only to obstruct his trial, and all hell breaks loose.

Rangam 2 undermines a good premise and downplays the emotions of a person wrongfully sentenced to death in a foreign land. For example, even while on death row, Chandru, to your astonishment, dreams of a duet number with Srila in a European destination. This trivializes the situation and dilutes the strong emotions the film has induced in you during an earlier scene where one of the prisoners is being beheaded in front of Chandru (a scene that outrages the audiences).

The movie could have done better if it had started with showing the protagonist already wrongfully on death row for possessing narcotics, instead of having a whole hour and a half intro with needless romcom, which, by the way, is neither funny nor romantic.

Jiiva's emoting doesn't quite make the cut as, like the direction, it, too, deprives the film of the necessary emotional heft. He doesn't quite pull off the role of a person to be executed. Thulasi's performance is inconsistent, but she does well when Chandru's petition is being heard in court.

Nawab Shah, who emoted well in movies including Bhaag Milkha Bhaag, looks quite artificial here. Nasser as a doting father but a selfish and classist ex-Army person does a decent job.

If you are looking for cheap thrills and a few good fight scenes, this film will not let you down. Manush Nandan's visuals (of Basilistan) are quite pleasing, though not great.

Rangam 2 may remind you of Liam Neeson's Taken 2, but the latter is significantly better. And yes, the movie has nothing to do with the surprise hit Rangam, and is merely trying to capitalize on it by posing as a sequel.
Share. Save. Connect.
Tweet
RANGAM 2 SNAPSHOT 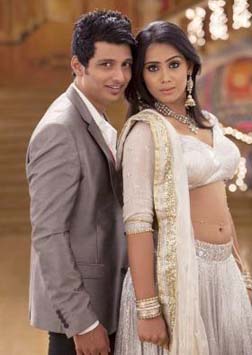 ADVERTISEMENT
This page was tagged for
rangam2 chandru goes to which country
Rangam 2 telugu movie
Rangam 2 reviews
release date
Jiiva, Thulasi
Follow @fullhyderabad
Follow fullhyd.com on
About Hyderabad
The Hyderabad Community
Improve fullhyd.com
More
Our Other Local Guides
Our other sites
© Copyright 1999-2009 LRR Technologies (Hyderabad), Pvt Ltd. All rights reserved. fullhyd, fullhyderabad, Welcome To The Neighbourhood are trademarks of LRR Technologies (Hyderabad) Pvt Ltd. The textual, graphic, audio and audiovisual material in this site is protected by copyright law. You may not copy, distribute, or use this material except as necessary for your personal, non-commercial use. Any trademarks are the properties of their respective owners. More on Hyderabad, India. Jobs in Hyderabad.