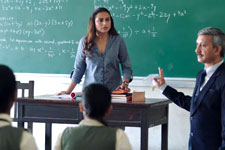 Prerna Prakash / fullhyd.com
EDITOR RATING
7.0
Performances
Script
Music/Soundtrack
Visuals
7.5
7.0
6.5
7.0
Suggestions
Can watch again
No
Good for kids
Yes
Good for dates
No
Wait to rent it
No
A lot of films have been made about disorders, speech impediments, and the consequent alienation of the afflicted man, but few have managed to make a point as simply as Hichki. Based on the book Front Of The Class: How Tourette Syndrome Made Me The Teacher I Never Had by Brad Cohen, this movie is quite capable of teaching us many moral lessons. It targets and discusses many important social issues, ranging from the neuropsychiatric disorder Tourette Syndrome, alienation and bias, to the social structure in Indian communities, privilege, and the education systems in India.

Such a pantheon of lofty topics in a single movie might seem daunting, but they are integrated into the narrative of the film seamlessly, telling you a story that has been told many times, but this time with a surprisingly fresh voice.

The story follows Naina Mathur (Rani Mukerji), a young woman with Tourette's Syndrome who is bent upon achieving her dream of becoming a teacher. Because of her disorder she is discriminated against and rejected by 18 schools where she goes for interviews, even though she is full of spunk and prodigious talent. When she finally bags a job at St. Notker's, an institution whose name is based on a stammering saint and her childhood school, she is faced with a difficult class of underprivileged children who have been admitted into the school because of the Right To Education act but are not accepted as part of the crowd.

While the theme of the movie is the same as that of every underdog film, Naina and the children from her section are a class apart. Both the class and the teacher have been discriminated against, both are talented, but the difference between the teacher and the students is that Naina has taken on every obstacle (and there have been many) thrown in her path and is ready for anything, but the children who have seen poverty and struggle throughout their young lives are easily discouraged and resort to delinquent behaviour in order to rebel against a structure that does not accept them or allow them any room to manoeuvre and become better.

Indeed, the movie talks about the struggles of Naina in detail, including with her estranged father who is patronising and embarrassed of his daughter's "flaw", her childhood where she was never accepted by her classmates or her teachers, and her uphill battle to gain respectability in her colleagues' eyes, but it is the stories of the children that she teaches, even though not detailed as well as that of the teacher, that are more poignant, and come very close to reality.

There are hundreds of unprivileged children in India who have to balance a complicated home life and an unforgiving school regimen, and many opt out of the system just because they are never given a chance to fit in and learn to rise above their circumstances. They are the underdogs who grow up to be the underbelly of society, not only because of their situations but also because of the chances that are taken away from them. The film very comprehensively outlines the problems with the education system, while also commenting on the rigid structures that do not allow children to expand their creative and artistic imaginations, especially if it is within the confines of a school ground.

The underprivileged kids are not shown as pitiable figures, but rather as real, intelligent, capable, and hyper-aware of the situations that they are in conflict with. For a mainstream Bollywood film, Hichki thankfully avoids the pitfalls of being OTT dramatic or overly preachy, and presents you with a story that is refreshingly normal.

There are many good things about Hichki, but also a few flaws that do not let it get that gold star it almost wins. While the movie is a fresh take on Indian society, it does not have the retention value that many other films do - it is not like Mardaani which talks about taboo, fiery topics in raw and unapologetic ways, and it is not a Saathiya which talks about romance, marriage, and the elusive nature of marital bliss - a topic that has always enthralled audiences.

Also, while the film is accurate in the points it seeks to make and brilliant in its execution, there is a tinge of melodrama that puts it in the same ballpark as many Bollywood dramas - something it could have done without. It is also quite predictable, with themes and tropes that come with every movie about social commentary and the underdog who is going to get their comeuppance. When you set a film in a school, and talk about children, there are very few avenues that you can introduce to get a "twist" in the tale.

The performance by Rani Mukerji is compelling and powerful. However, the children take the cake with their natural acting, casual witty banter and realistic reactions - they are written and cast perfectly. The performances by the adults in the film save Mukerji are lacklustre in comparison to the spirit of the children who portray exceedingly well the lives of slum-dwellers forced into a social system where they are discriminated against, put down by the rich and forced to rebel against authority to show their disapproval of their living conditions and social standards.

Hichki has good production values, a peppy, evocative soundtrack, and good editing. The movie does not use any out-of-the-box cinematic techniques or storylines, but the acting, directing and overall vibe of the production are deeply satisfying, leaving the viewer with a bittersweet feeling in their gut.

This is a film everyone needs to watch, understand and internalise, because the points being made in it are essential in the discourses of our communities and of our lives. "There are no bad students, only bad teachers," Rani Mukerji's Naina says in the movie, and fortunately, this movie is an excellent teacher.
Share. Save. Connect.
Tweet
HICHKI SNAPSHOT 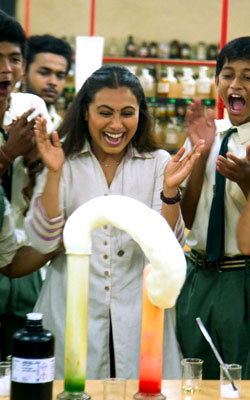 ADVERTISEMENT
This page was tagged for
Hichki hindi movie
Hichki reviews
release date
Rani Mukerji, Supriya Pilgaonkar
theatres list
Follow @fullhyderabad
Follow fullhyd.com on
About Hyderabad
The Hyderabad Community
Improve fullhyd.com
More
Our Other Local Guides
Our other sites
© Copyright 1999-2009 LRR Technologies (Hyderabad), Pvt Ltd. All rights reserved. fullhyd, fullhyderabad, Welcome To The Neighbourhood are trademarks of LRR Technologies (Hyderabad) Pvt Ltd. The textual, graphic, audio and audiovisual material in this site is protected by copyright law. You may not copy, distribute, or use this material except as necessary for your personal, non-commercial use. Any trademarks are the properties of their respective owners. More on Hyderabad, India. Jobs in Hyderabad.