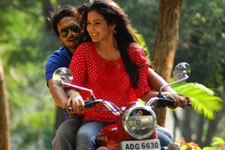 Noha Khan / fullhyd.com
EDITOR RATING
2.5
Performances
Script
Music/Soundtrack
Visuals
3.0
2.0
2.0
3.0
Suggestions
Can watch again
No
Good for kids
No
Good for dates
No
Wait for OTT
No
It's easy to be apprehensive when you see a title that goes "Dillunnodu, Love you TWO". Yes, this movie is another, and rather hurried, spin on the one-guy-two-girls triangle. Our directors apparently want to persuade youngsters to marry twice rather than cheat. And if you're curious as to how a guy, who is no Greek god, lands two girls, Dillunnodu does not offer any pointers other than obsolete dialogues and flagrant extravagance.

Sai (Sai Ram Shankar) is the owner of a cab company, and is apparently loaded. He makes people his close confidantes after just one conversation, and falls in love even before any conversation.
He is besotted with a girl he glimpses at the mall, Chaitra (Jasmine Bhasin), who in true Tollywood heroine style keeps tossing her hair and laughing pointlessly.

He first pays for her meal anonymously, and then confesses his undying love for her. She walks away, but they meet again when Sai fills in for a sick taxi driver. Ignoring her rejection, he persists. He even spending Rs. 2 lakhs on her shopping when she starts warming up to him.This turns out to be a ruse, planned by Chaitra and her friend with horribly bad Telugu, to teach him a lesson. Accordingly, they effectively part ways after some droning by Sai.

This sets the stage for the entry of the second side of this isosceles triangle, Simran Kaur (Priyadarshini). She is supposedly a Punjabi who seems to know better Telugu than Hindi. Sai, again, falls in love with her in the blink of an eye (each of these blinks lasting the duration of a song), but takes a slightly slower approach this time around - once bitten twice shy works even for him. Their relationship slowly flourishes until Chaitra hurtles back into the scene, literally. She fabricates reasons to meet him daily, and even gifts him a car to make up.

Eventually, the girls both profess their loves for him, and he responds positively to both of them. And post-interval, he decides that he needs both of them in his life, and plots to convince them to co-exist as his girlfriends. This leads them all to Bangkok where the girls get friendly over some lavish gifts they buy each other, and it all progresses to them both abandoning Sai when he declares "I love you two". The rest of the movie is a jumble of tiring melodrama and unnecessary fight sequences meant to give Sai a chance to seem more hero-like.

The very idea of one guy having two girlfriends is something that is outrageous in our society, ergo this inspires a negative outlook for the movie from almost the get-go. Also, the story lacks coherence and seems a little all over the place, and also rather rushed.

Then, given Sai's lacklustre characterization, it is hard to believe that the female protagonists both love him so much that they would be willing to even consider sharing him with another. And too much time is spent in describing various happenings but too little on portraying the emotions that each of the characters is presumably feeling at the time.

Despite the script giving him ample scope, the expression on Sai Shankar's face just doesn't alter enough in accordance with the different scenes. The complex nuances of the "Dill" that the title claims he has do not appear to make their way to his face. And it is hard to miss his glaring obsession with blue shirts. We can only presume that is a superstitious attempt at good luck that this film truly needs.

Jasmine looks very young and pretty, but her Telugu needs some work. Priyadarshini's expressions don't convey the turmoil she feels, though she brightens up the screen with her presence. There's a lot of sashaying by both of them.

Chandramohan and Pragathy have typical roles as Sai's parents - Sai's mother dotes on him, while his father is relatively strict. Dharmavarapu Subramanyam plays a software professional, and is given a robotic role where all he does is keep telling Sai to pick just one girl (this movie was in the cans a while, in case you are wondering about the late comedian).

M S Narayan and Satyam Rajesh are roped in for some comic relief though none of their jokes really tickle. Brahmanandam makes a guest appearance that comes too late in the movie to be of any help in cushioning its fall.

The music is nothing to talk about, and neither is the cinematography. The movie screams of being another attempt by Sai Ram Shankar to piggyback on his celebrated brother's success in the movies, and is just "two" much for people to accept, much less like.

Head for Dillunnodu only if your only other option is watching paint dry.
Share. Save. Connect.
Tweet
DILLUNNODU SNAPSHOT 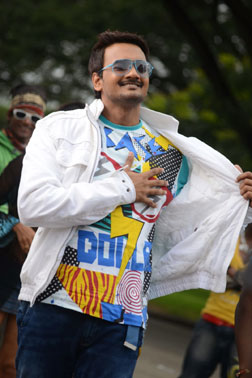 ADVERTISEMENT
This page was tagged for
Dillunnodu telugu movie
Dillunnodu reviews
release date
Sairam Shankar, Jasmine
theatres list
Follow @fullhyderabad
Follow fullhyd.com on
About Hyderabad
The Hyderabad Community
Improve fullhyd.com
More
Our Other Local Guides
Our other sites
© Copyright 1999-2009 LRR Technologies (Hyderabad), Pvt Ltd. All rights reserved. fullhyd, fullhyderabad, Welcome To The Neighbourhood are trademarks of LRR Technologies (Hyderabad) Pvt Ltd. The textual, graphic, audio and audiovisual material in this site is protected by copyright law. You may not copy, distribute, or use this material except as necessary for your personal, non-commercial use. Any trademarks are the properties of their respective owners. More on Hyderabad, India. Jobs in Hyderabad.