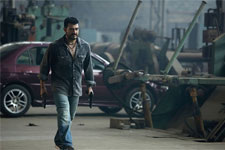 Ravi Kandala / fullhyd.com
EDITOR RATING
5.5
Performances
Script
Music/Soundtrack
Visuals
8.0
5.0
7.0
8.0
Suggestions
Can watch again
No
Good for kids
No
Good for dates
No
Wait for OTT
No
It has to be a sign from God. A sign that he hears the anguished cries of us reviewers who week after mind-numbing week watch tripe that is dished out, to protect our beloved readers. How else can you explain the fact that a day after we complain about the death of good romantic tracks in Telugu cinema, you get to see a sensitive, mature love story that actually involves a courtship and not stalking? (Well, technically this is a dubbed movie, so our crib against Telugu cinema still stands.)

But then, this is Gautham Vasudev Menon, the man known to write engrossing love stories (Ye Maya Chesave, Yeto Vellipoindi Manasu), or to blend in beautiful romantic threads into other tales (Gharshana, Surya S/O Krishnan). Yenta Vaadu Gaani is Menon's final film in his cop trilogy (Gharshana and Raghavan being the first two). The fact that the love stories and the father-daughter drama play out better than the cop theme in this one just seems to suggest that Menon's decision to end with three films is a wise one.

This film features Ajith playing DCP Satyadev in all his salt and pepper glory. Satyadev is a supercop who falls in love with Hemanika (Trisha), a divorcee with a daughter. He first meets her when she is due to deliver, then sees her again after two years at a courthouse, and then courts her for the next four years before proposing marriage. And when we say court, we mean court - they go out to restaurants, take Hemanika's daughter to the beach and to malls, and generally hang out together before Ajith manages to ask her to marry him.

And the acceptance is not immediate - Hemanika wonders if Ajith can be a father to her daughter, and whether having kids of their own will somehow take away the love. In other words, this is not your usual lived-happily-ever-after scenario. And all this build-up proves to be important to the film as the four-year road trip that Satyadev takes with his daughter later needs a strong motivation, and this episode provides the perfect push.

Around this love story, Menon builds a parallel track with a strong villain, Victor (Arun Vijay). Victor is unapologetically bad and strong - someone who even Satyadev can't get rid of in a single instance. How Satyadev the father and Satyadev the cop merge together in a mission forms a good chunk of the movie.

Ajith is outstanding. And we might have said this before, but we'll say it again - how brave of a superstar to not dye his salt and pepper hair and even allow jokes to be cracked about it. And after seeing Trisha attempt to play a younger girl and fail miserably in Lion, it is such a pleasure to see her play a middle-aged woman with a daughter in this film. She looks beautiful and carries her role well. Anushka, on the other hand, shouldn't have done this film. And she certainly should never have had agreed to those bangs - she looks bad. Arun Vijay plays a terrific baddie, and appears seriously creepy in the final portions.

Technically, the film is quite impressive - not something you wouldn't expect from a Menon movie. The movie loses out, though, due to its leisurely narration and the feeling of déjà vu that it induces. Most of the plot points (father-child relationships, villain targeting the cop's family, helping a friend whose child has been kidnapped) have all been seen in Menon's earlier movies.

Yenta Vaadu Gaani is one for Gautham Menon's fans. Mass audiences might not find much to savour in the non-bouncy fights or the English dialogue. If you are the kind that like their movies to linger on scenes just a little longer and have flesh-and-blood characters instead of mere cardboard props, here's your best bet this weekend.
Share. Save. Connect.
Tweet
YENTHA VAADU GAANI SNAPSHOT

See Yentha Vaadu Gaani full details
YENTHA VAADU GAANI USER REVIEWS
1 - 2 OF 2 COMMENTS
POSITIVE  |  NEGATIVE |  NEWEST  |  OLDEST  |  MOST HELPFUL  |  LEAST HELPFUL
USER RATING
7.0
1 USER
Performances
Script
Music/Soundtrack
Visuals
8.0
6.0
8.0
8.0
Can watch again - No
Good for kids - Yes
Good for dates - Yes
Wait for OTT - Unsure
The Common Movie Goer on 27th May 2015, 6:04pm | Permalink
Gautham Menon is at home when he is directing these cop movies. The movie is a hyper realistic tale of two egos clashing. None of the characters respond in typical movie style and behave exactly as if they were actually placed in that situation. However, in no way does this reduce the engagement of the audience. You are hooked right from the first frame and the screenplay helps you connect with the characters.

Thala Ajith lets the actor in him take over the movie and delivers a nuanced and powerful performance. Arun Vijay is menacing and Ajay's dubbing suits him but his dialogues lack punch at places. Ajith's dubbing artist does an excellent job. (I think it is Srinivasa Murthy, the same guy who dubs for Surya).

As much as I enjoyed the movie, the pre-climax was a bit of a stretch and the editor should have been merciless. The villain's dialogues don't help the pre-climax. The songs in the movie distract and should have been edited out. The movie has a typical Gautham Menon-esque dark tone. However, he seem to be caught in two minds and the movie's overall tonality suffers a little due to this. The BGM is a straight lift from Oblivion and other video games, but elevates the mood to new heights and complements the situation.

Watch the movie if you like well developed characters and a racy screenplay. The violence is good. The parkour scenes and the fights have been shot very well. If you are looking for a comedy track or especially powerful punch dialogues, you will probably be let down. And for those wondering, the movie doesn't have the typical tamil flavor. It looks quite sleek and polished. I would rate this movie 7.5. Regular movie goers should definitely check it out.

ADVERTISEMENT
This page was tagged for
yentha vaadu gaani review
enthavaadu gaani telugu movie
Yentha Vaadu Gaani telugu movie
Yentha Vaadu Gaani reviews
release date
Follow @fullhyderabad
Follow fullhyd.com on
About Hyderabad
The Hyderabad Community
Improve fullhyd.com
More
Our Other Local Guides
Our other sites
© Copyright 1999-2009 LRR Technologies (Hyderabad), Pvt Ltd. All rights reserved. fullhyd, fullhyderabad, Welcome To The Neighbourhood are trademarks of LRR Technologies (Hyderabad) Pvt Ltd. The textual, graphic, audio and audiovisual material in this site is protected by copyright law. You may not copy, distribute, or use this material except as necessary for your personal, non-commercial use. Any trademarks are the properties of their respective owners. More on Hyderabad, India. Jobs in Hyderabad.