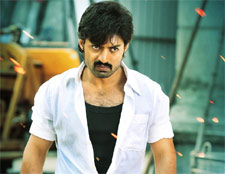 The man's latest release, Om 3D, is a case study that amply displays his love for cinema and his lack of understanding of the basics of good cinema. The film has Kalyan Ram playing the avenging angel for the umpteenth time, the narration of the film is as terrible as terrible can be, and the screenplay includes every cliché in the annals of Telugu cinema, but on the flip side, the film is technically brilliant, and the efforts taken by the team to bring a superior 3D product to our screens are truly laudable.

Om 3D has the typical Telugu hero Arjun (Kalyan Ram), with a loving family including dad Harischandra Prasad (Karthik), mom (Sitara), uncle (Suresh) and aunt (Surekha Vani). Uber rich, Arjun's only job in life seems to be protecting his dad from the various troublesome situations he keeps getting into. The film is about Arjun's travails to avenge the injustice meted out to his family.

The film abounds in clichés, and one really wonders what the leading man sees in these scripts and directors to invest tonnes of money into these products. The hero kills a hundred thousand people in the course of protecting his father, about a million bullets are fired in the 124-minute runtime, father and son proclaim their love for each other a billion times, cars are blown up a gazillion times, and the audience is handed out torture unlimited while all these happen.

There is a scene in the movie where Rhea walks towards Kalyan Ram and is expected to display a range of emotions on her face and eyes - Nikesha Patel, however, completes the walk with all the grace of a catwalk model who's initially told she's the showstopper but is relegated to wearing the worst dress in the collection and is told not to come out in the final walk.

Kalyan Ram, the leading man, continues to confound us both ways - with his choice of subjects, and with his facial expressions. Just like we can't explain why he keeps choosing similar subjects all the time, we couldn't even figure out what he tries to convey with his facial expressions during any of the scenes in the movie. His dialogue delivery hasn't really improved either.

Everyone else in the movie overacts to the maximum extent, and is not worth mentioning. The music is boring, and the songs should just have been cut out, as they are neither good to watch nor to listen to.

The only notable aspect of the movie is the technical finesse. But for some childish graphics in the pre-climax, the film has some great work on display. The 3D effects have been rendered very nicely, and it clearly shows that we can reach the international standards that we crave about with a little help. The cinematographer has obviously worked hard, and the output shows.

It is indeed a pity that this misadventure will go down as one of the first 3D films in the history of Telugu cinema. If only Om 3D (we still haven't figured out why it was named Om) had some semblance of a plot and a director who could've extracted decent performances from his star cast, the efforts would not have been a complete waste.
Share. Save. Connect.
Tweet
OM (3D) SNAPSHOT 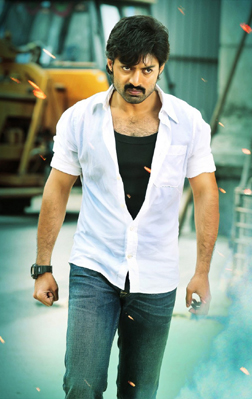 ADVERTISEMENT
This page was tagged for
Om (3D) telugu movie
Om (3D) reviews
release date
Nandamuri Kalyan Ram, Kriti Kharbanda
theatres list
Follow @fullhyderabad
Follow fullhyd.com on
About Hyderabad
The Hyderabad Community
Improve fullhyd.com
More
Our Other Local Guides
Our other sites
© Copyright 1999-2009 LRR Technologies (Hyderabad), Pvt Ltd. All rights reserved. fullhyd, fullhyderabad, Welcome To The Neighbourhood are trademarks of LRR Technologies (Hyderabad) Pvt Ltd. The textual, graphic, audio and audiovisual material in this site is protected by copyright law. You may not copy, distribute, or use this material except as necessary for your personal, non-commercial use. Any trademarks are the properties of their respective owners. More on Hyderabad, India. Jobs in Hyderabad.